Recently, we locked in an average share price gain of 23% through buying and selling shares of NXP Semiconductors ($NXPI), and we are still long one-third of the initial position as well.

As always, a few valuable lessons and tips from this trade can be added to your trading arsenal, so let's take a simple, objective look at why we bought $NXPI in our nightly stock picking newsletter, and what was learned from it as well. Read on...

At the beginning of the year, $NXPI first caught our attention after following up an impressive 40% rally (from late 2014) with a period of price consolidation above its 50-day moving average.

As January progressed, the price action tightened up a bit more, causing the semiconductor stock to oscillate in an 8% price range, while still holding above key support of its 50-day MA.

On February 6, $NXPI tested the high of its band of consolidation by probing above the $82 level on heavier than average volume.

Two days later, the stock formed a tight inside day on lighter volume, giving us a pretty low-risk entry point based on the bullish price and volume action of February 6.

After forming the inside day, we listed $NXPI as a potential buy entry in the Watchlist section of the February 11 issue of The Wagner Daily.

Specifically, we told subscribers we were placing a buy stop to enter the trade on a move above the high of the February 10 inside day.

The daily chart below shows the actual trade setup at that time: 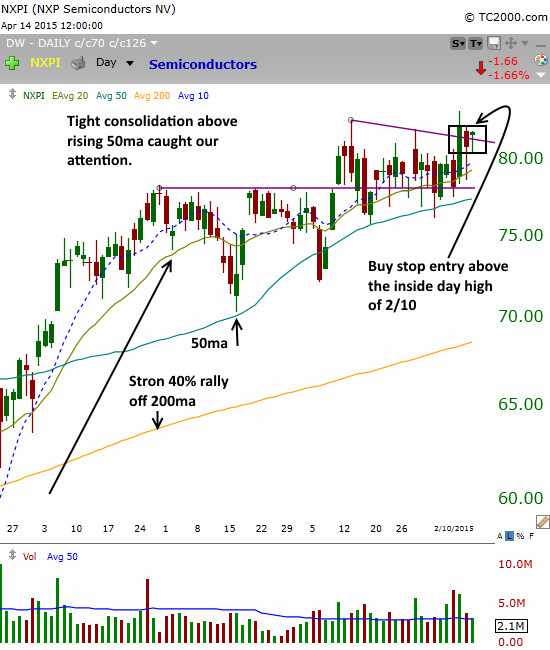 As anticipated, $NXPI triggered our buy entry that day and subsequently cruised 6% higher before stalling and waiting for near-term support of the 10-day moving average to catch up to the price (which it did on February 23).

As shown on the following chart, $NXPI gapped sharply higher on a news-driven move that occurred on March 2, then again traded in a tight, sideways range while waiting for the 10-day MA to catch up (which occurred on March 12).

On March 23, the stock showed its first sign that a potential short-term pullback may be around the corner by forming a bearish engulfing candlestick pattern.

As such, we made a judgement call to lock in some profits by selling about 1/3 of the position size the following day (March 24).

On that first exit at $104.83, subscribers who followed the trade setup netted approximately a 27% gain.

On the chart below, notice how a touch of the 10-day MA (dashed blue line) perfectly acted as near-term price support several times after the initial February 11 breakout: 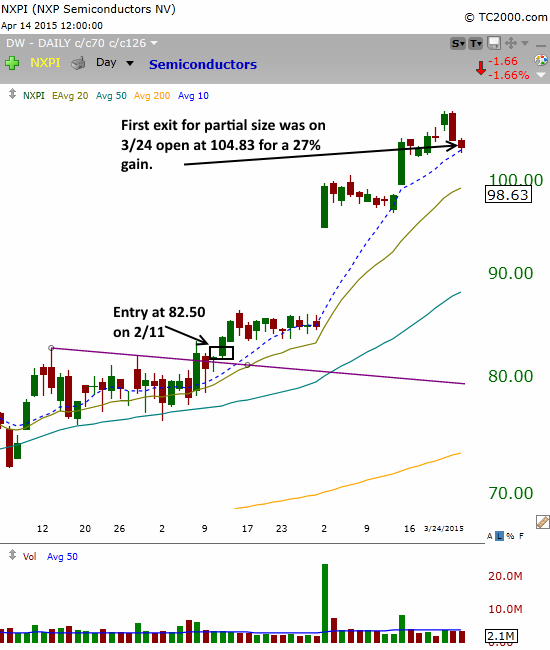 After locking in profits on partial share size, we tightened the protective stop to protect gains on another 1/3 of the position size.

On April 6, $NXPI gapped down on the open and clipped that stop (beneath the April 1 low), enabling us to lock in an 18% price gain on the second third of the position (sold at $97.65).

The second exit is shown below: 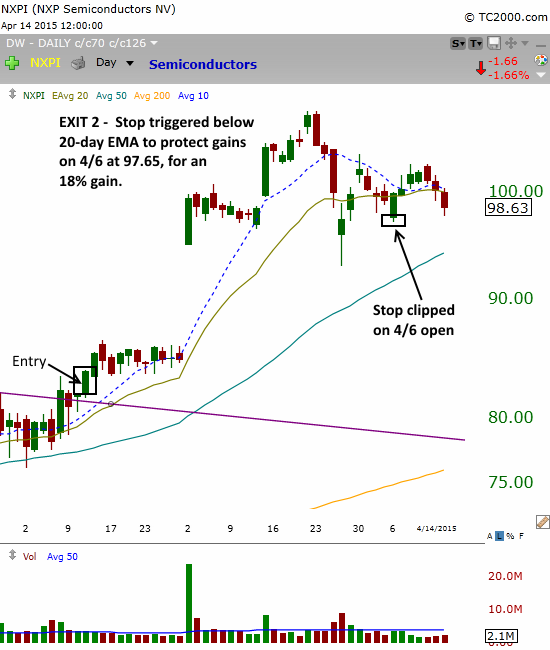 As of today (April 15), we remain long the final third of the position with an unrealized gain of about 20%.

From here, the plan is to buy more shares with another low-risk entry of a pullback to the area of the rising 50-day moving average (currently just below $95).

There are a few great tips (mini lessons) to be learned from this trade review, which will surely help to increase your profits in any stock trades you make in the future:

As long as the price action of $NXPI remains bullish, we will continue to hold (and possibly add to) the remaining third of our position that is currently showing a 20% unrealized share price gain.

This article first appeared at MorpheusTrading.com

Disclosure: The author is long NXPI.