The percentage of individual investors describing their outlook for stocks as “neutral” rose to its highest level in nearly two years. At the same time, optimism is at its lowest level in more than six months according to the latest AAII Sentiment Survey.

Bullish sentiment, expectations that stock prices will rise over the next six months, plunged 10.9 percentage points to 26.4%. Optimism was last lower on August 31, 2017 (25.0%). The drop keeps optimism below its historical average of 38.5% for the third time in five weeks.

Neutral sentiment, expectations that stock prices will stay essentially unchanged over the next six months, jumped 5.9 percentage points to 45.2%. Neutral sentiment was last higher on May 25, 2016 (52.9%). The historical average is 31.0%.

Bearish sentiment, expectations that stock prices will fall over the next six months, rose 5.0 percentage points to 28.4%. Though a four-week high, pessimism remains below its historical average of 30.5% for the 12th time in 13 weeks.

Trade policy appears to have had some impact, though it’s uncertain how much. Tariffs and trade policy were specifically mentioned by some respondents to this week’s survey even though we did not ask about it. Many individual investors are also anticipating continued volatility and/or think the political backdrop could have a further impact on the stock market. Higher interest rates are having an influence on some, but not all individual investors. Also playing a role are valuations, tax cuts, earnings and economic growth.

This week’s special question asked AAII members to share their thoughts about the current duration of the bull market, which will mark its ninth anniversary tomorrow. Responses varied. Slightly less than two out of five respondents (38%) believe the bull market will continue at least through the end of this year, if not longer. Some of these respondents cited expectations for sustained economic growth, while others conditioned their forecasts on a sharp rise in interest rates or a political event not occurring. Nearly 26% of respondents think the bull market is near the end of its run. The possibility of higher interest rates or tariffs were given as reasons. Approximately 22% see risks and/or uncertainty as having increased, with many of these respondents expecting stock prices to be more volatile going forward. Some of these respondents cited politics and tariffs as risks. 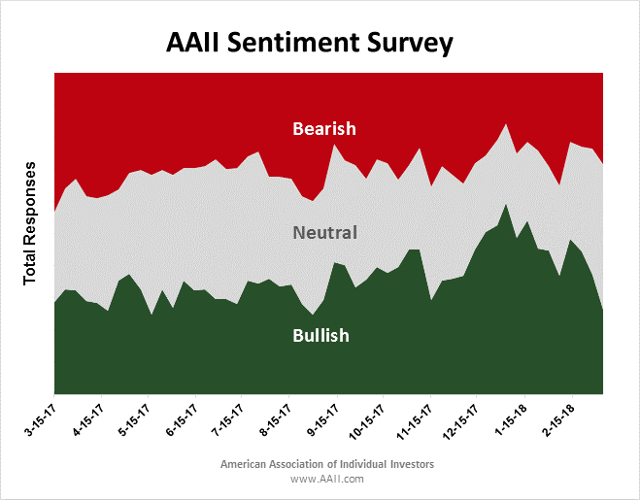