Though pessimism declined and optimism among individual investors rebounded in the latest AAII Sentiment Survey, they remain unusually high and low, respectively.

Bullish sentiment, expectations that stock prices will rise over the next six months, rebounded by 4.0 percentage points to 24.9%. Optimism remains below its historical average of 38.5% for the 13th time in 15 weeks.

Neutral sentiment, expectations that stock prices will stay essentially unchanged over the next six months, fell by 2.4 percentage points to 27.8%. Neutral sentiment is below its historical average of 31.0% for the seventh time in eight weeks.

Bearish sentiment, expectations that stock prices will fall over the next six months, pulled back by 1.6 percentage points to 47.3%. The decline follows the 5½-year high set last week. Pessimism is above its historical average of 30.5% for the 11th consecutive week and the 14th out of the last 15 weeks.

As noted above, both optimism and pessimism are outside of their typical ranges. Bullish sentiment readings below 28.1% imply an unusually low level of optimism. Bearish sentiment readings above 39.8% imply an unusually high level of pessimism. Historically, both have been followed by higher-than-median six- and 12-month returns for the S&P 500 index, particularly unusually low optimism.

The survey period runs from Thursday through Wednesday. Reminders to take the survey are emailed to a rotating group of AAII members every Monday. Slightly less than 40% of this week’s votes were placed on Monday and about 80% were cast between Thursday and Monday.

This has been a tough year for investors. In a separate survey we conducted last week, 73% of respondents said their investments performed worse than they expected. Many AAII members follow long-term strategies and do not alter their strategies in response to the ongoing volatility. However, this is not universally the case, as cash allocations reached a 33-month high last month according to our November Asset Allocation Survey.

Beyond market volatility and worse-than-anticipated returns, influencing individual investors’ outlooks are Washington politics (including President Donald Trump and the change in House leadership), tariffs (particularly the ongoing trade war with China), corporate earnings, the Federal Reserve, valuations and concerns about the pace of economic growth. 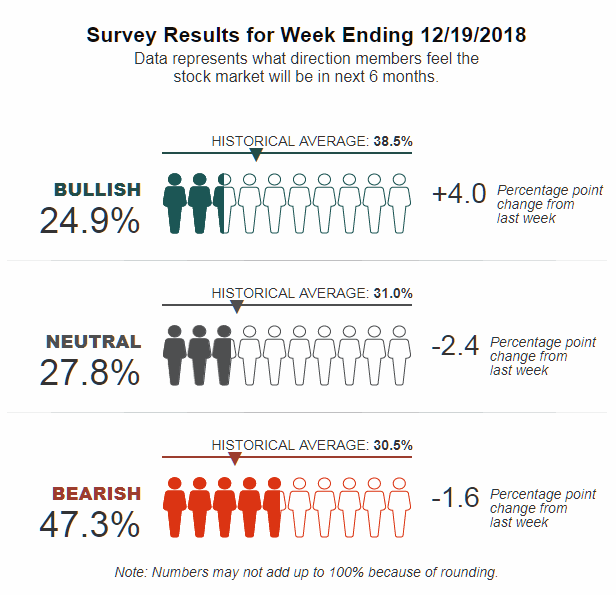