This Is A Continuous Weekly Chart Of Live Cattle 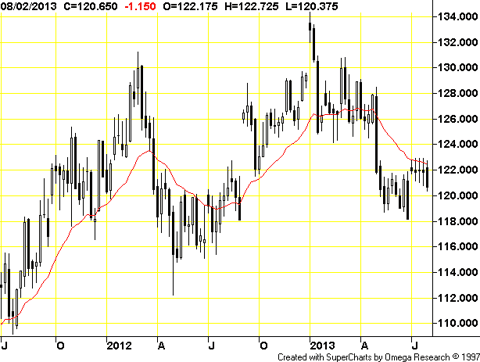 I have been so busy doing other trades, it has been awhile since I have traded the meats, (Live Cattle & Lean Hog Futures) and a long time since I have simultaneously sold far out of the money puts and calls in Live Cattle or Lean Hogs, a short strangle trade. But it appears that technically by both time and price, it is approaching a time this coming week to begin putting on these trades. If you are not familiar with what a short strangle is, you can click here for a quick option tutorial and then return to this article.

Why Is This A Good Time For Short Strangles?

The best profit scenario is after a large move occurs and the underlying futures contract begins a period of consolidation or retracement. One does not want to employ this strategy when a market is trending, as one can quickly get unbalanced where what one is losing on one side of the trade is not balanced by what one is earning on the other side of the trade. This strategy takes advantage of option decay which takes time to work. While waiting, one hopes the underlying futures contract goes up a bit and back down a bit but in the end, gets nowhere.

Now look at the weekly chart at the beginning of this article, of Live Cattle. On this chart the front month of Live Cattle, most closely tied to the cash price, has traded as low as 110 and as high as 134. That makes 122 about in the middle of the range, where we have been trading for the past 5 weeks. Thus, it would have actually been optimal to put this trade on a month ago, but the recent price action has at least confirmed that Live Cattle is not trending much at present. In fact, we were at this same price level about 14 weeks ago as well. The reason this is a good time to begin placing this trade, is that seasonally, Live Cattle tends to bottom around the first week of August, and then rally for the remainder of the year. In the chart above that starts in July 2011, Live Cattle bottomed in early August 2011 just under 110, and by November traded about 125.50. The next year, in the third week of July 2012, we bottomed just under 116 and then rallied to 129 by late November 2012. The past couple years, Live Cattle futures have followed a seasonal pattern of bottoming in the middle of July to the first week of August, and rallying into November or later. In the past couple years this rally was about $13 to $15 per lb. which explains why we have a present price of 120.65 in the nearby August 2013 Live Cattle contract, and a price of 127.00 in the December 2013 contract. Traders are pricing in part but not all of the expected seasonal price increase. December is trading $6.35 higher, when in fact it will most likely trade $13 to $15 higher eventually. That makes now the time to sell out of the money puts in the December Live Cattle contract. If you click here, you will find the current prices of those December puts. A 120 strike put is selling for .65 ($260) and a 118 put is selling for .45 ($180). Unless December Live Cattle falls very, very hard, these puts should expire worthless and the entire premiums can be pocketed. I will be working some orders next week. I will place orders to sell these puts for their current premium level or slightly better, which I should get on easily if we experience any further weakness in Live Cattle. I will wait for a rally to sell the calls as the bullish seasonal should start to kick in and higher prices in the next few weeks should allow me to sell higher strike calls. If I sell the calls now, prior to a rally, the calls could gain significant premium and the profits I make on the puts going to zero, will not offset the losses I incur as the calls get closer into the money and gain. The time to sell the puts is now, and on any further weakness.

This Is Time To Buy Cattle And Sell Hogs

Lean Hogs recently had big rallies on the news that China was purchasing Smithfield foods. Recently Lean Hogs have fallen back a bit off the highs but remain at elevated prices. The fundamentals for Lean Hogs are not nearly as bullish as Live Cattle, and some would say with the cheap corn prices expected during harvest, they will be feeding all the hogs they can which should depress hog prices. So this is a year the seasonal trade of being long Live Cattle and short Lean Hogs, should work well. In addition to selling puts on December Live Cattle, I will be selling calls in December Lean Hogs. This will take advantage of the seasonal trade that occurs in August. Then, when Live Cattle rallies I will go ahead and sell the out of the money calls at higher strike prices. And as the Lean Hog prices fall, I will later sell the puts at lower strike prices. By selling the cattle puts now and the hog calls now, I will be more delta balanced while waiting for the rally in cattle and the dip lower in hogs. I will be putting on the seasonal trade from August 5 to August 29th as identified by Moore Research Center but I will be doing it in the options instead of the futures. Selling a very much out of the money put in cattle is much more conservative than going long a Live Cattle futures contract. It allows for more safety and the timing does not have to be so exact. With the futures contract, drawdown can be swift and extreme, but the options will be hardly affected as only an extreme move will take the options in the money. Also, I will be placing option order in the December 2013, rather than the February 2014 contracts. There is more liquidity in the December options. In another month I might begin placing February options orders. If we have a sharp move down in cattle or back up in hogs that is counter to the seasonal, then I might go ahead and take advantage of the hefty extra premium and then sell February options early. Check back to this article and I will try to update my progress on the trade. You can also email me with questions. Yesterday I posted another Live Cattle article that you can read here.