I just rode through a horrific selloff in DUST this week, while missing a great easy rally in NUGT. I was not early, I was just plain wrong. Now what do I do? Fortunately, I was very conservative in my trading and can recover. But it will take a plan. First let me say that I trade DUST in my IRA because trading in this speculative leveraged stock is an extreme gamble, just like life. I never plan to retire and will not touch my IRA until forced to withdraw funds so I am not too worried about whether or not I build a nest egg. My wife is conservative and her IRA should take care of her. We have three successful companies and figure we will survive just fine even if I blow all the funds in my IRA. I don't want to blow it because then I would lose out on the fun of trading. Therefore after a big drawdown, I always get serious and build it back up. To ensure I don't blow it, I need a plan.

Setting Up a Fun IRA Trading Account That Does Not Go Broke Playing DUST Or NUGT, Etc.

What is very deceiving while playing DUST, is the fact that it is triple leveraged. So if you buy 100 shares of DUST, you are going to gain or lose as if you owned 300. Owning 500 shares equals 1500 shares of movement. That is really scary! The recent low in GDX was $24 and it has rallied to nearly $31 today, for a gain of 29%. That is pretty close to 33% which is a near wipeout for DUST traders who bought at $110. Thankfully, I was smart enough to buy DUST at $60 average instead of at the top of $110.

Now Where Is My Breakeven

How High Can GDX Move On This Rally?

I looked at a three year weekly chart of GDX that you will find here: 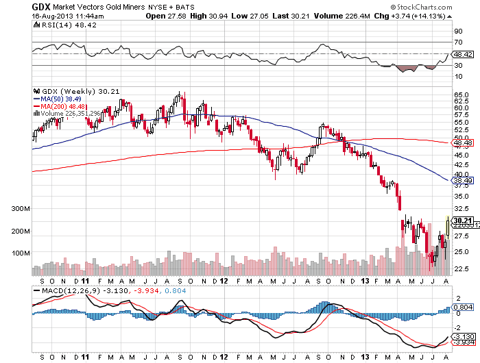 What the above illustration really shows is that I cannot add any cash beyond my initial $20,000 until that money is pretty well tapped out, with GDX trading above $36. At that point, I can say that the original investment is toast and it will then be time to employ the extra cash to try and get my money back on a move from $36.50, back to support at $30.

Again, this is an illustration. In practice, I am a day trader and when I see support broken during a hard down trading day, I try to dump at least half of my position, and then buy it back when we stabilize at lower prices. This greatly helps reduce my average price without adding capital to the position. Also, if I have 300 shares, I can scalp from profits by selling 50 to 100 shares on a rally, and buy them back after a $1 to $2 dip back.

Another strategy to employ is to use extra cash sitting around and buying NUGT with it. With the big money made in NUGT this week, I would be looking a whole lot better on my DUST position right now. Of course that is hindsight.

Disclosure: I am long DUST.