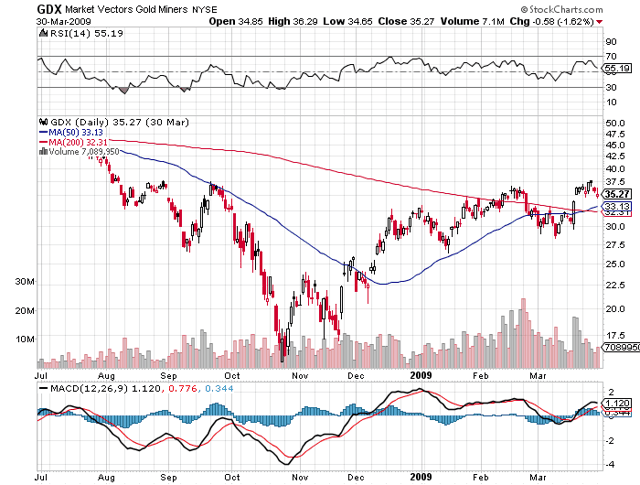 What is amazing about 2008, was that 4 days before making the all-time low, on Monday, October 20, 2008, GDX closed at $23.44. Amazing that the GDX ETF which consists of about 25 different major gold producers, would lose over 34.5% of its value in just 4 days. The lowest day of all times was a Friday and GDX opened on its low and closed up for the day. (Note: With the weakness of the last couple days, I am wondering if GDX might open on its low tomorrow, October 31, 2014, and close up for the day, and then retest the bottom and hit its current lowest close on Monday, November 3, 2014, and then rally strongly out of the hole).

In 2008, $20 support held initially, but then had two hard down closes below $20, before bottoming on the low of the 3rd day. Moving to 2014, $20 was also support in GDX until it gave away and GDX closed down hard for the last two days, closing today at $18.20, meeting my target of falling 10% below $20 support. If GDX does not bounce from $18, then the next target is $16, which is a 20% drop from the $20 support level. Despite today's carnage, I am still hopeful $18 will be enough of a selloff to get a bounce on Friday and lowest close on Monday at the latest.

Back in 2008, the all-time lowest close of $15.86 was scored on the 5th day of trading below $20. However, then GDX would bounce back up to $21.75 just 3 trading days later, and hit $23.95, just 7 days later. This shows that had one bought GDX on the close of October 20, 2008 at $23.44, and rode it down through the low close just 5 days later, and continued holding another 7 days, a total of 12 trading days, one could sell at a nice profit of about 50 cents. After this amazing rally, GDX would fall back to retest the lows for 11 days falling to $17.04, before making a high above $25, just 2 days after that. The volatility of 2008 was definitely much greater than the volatility in GDX in 2014. Still, the miners are so oversold, there is a great chance that GDX recovers back above $20 within the next couple weeks, and may rally substantially more.

I will end with a current daily chart of GDX as follows: 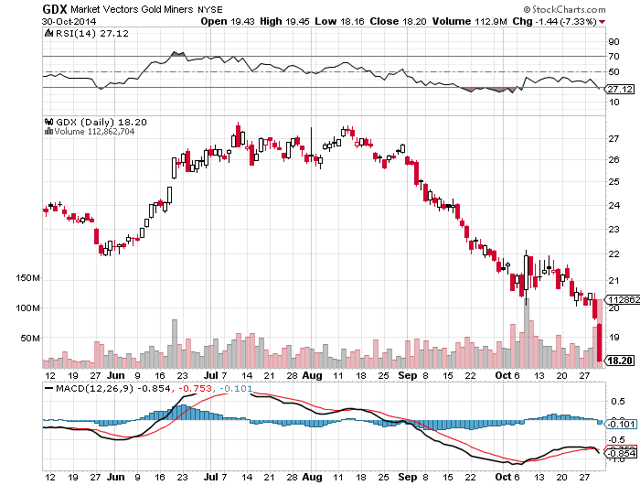 Here is the current daily chart of GDX, showing how GDX has fallen over 11% in just two days. On October 8th, GDX did a $2.05 reversal in a single day, hitting a low of $20.11 before hitting a high of $22.16. GDX needs to do a similar reversal now, to stop the current selloff dead in its tracks. If $18 does not hold as support, the next stop is $16, towards the all-time lows.

There is nothing fundamentally to justify the current action, and based on the price of gold, the gold mining stocks are trading at low valuations not seen in over 30 years. A good example is Iamgold (IAG) which has a book value of $7.51, but closed at $1.96 today, just 26% of its book value. The forward PE is 10.3. The market cap is $738 million, but recently the company sold assets totallying $540 million that has not closed and does not reflect in these figures. The assets sold were carried on the books at about $260 million less than what they were sold for, if I remember correctly. Making the book value adjustments, the stock is therefore trading for less than 20% of book value. This stock has traded in the $20, a couple times after trading below $2. This is the 3rd trip under $2, and my son is convinced this stock will again rise from the ashes. He sold out of his GDX position a couple weeks ago and moved into IAG. So far he has lost less being in IAG than had he stayed in GDX. My son held NOKIA stock from over $4, through the $1.67 low, and 10 months later sold out at a nice profit. He is confident that holding IAG from $2.95 will also pay off despite being down 1/3. And he does not expect to have to wait 10 months, before IAG again trades over $3. My son reasoned that instead of buying leveraged JNUG which has slippage and could wipe him out on a reverse split, he can hold IAG for several years if necessary, and when it trades again over $20, he will be well paid for his patience. I agree with his analysis. It is not too late to dump JNUG or NUGT and replace it is IAG, which trades at such a low price, the percentage gains on the upside should compete well with the leveraged mining ETFs of both JNUG & NUGT, without the drawbacks mentioned above.

Disclosure: The author is long JNUG.