I first posted this trading opportunity on Seeking Alpha on June 21, 2015, click here. If you did not see that article, you will need to read it so that you will understand the basic setup of the trade. This involves selling far out of the money put options (and possibly calls later) in December Lean Hog Futures. Here is the current daily chart of December Lean Hogs: 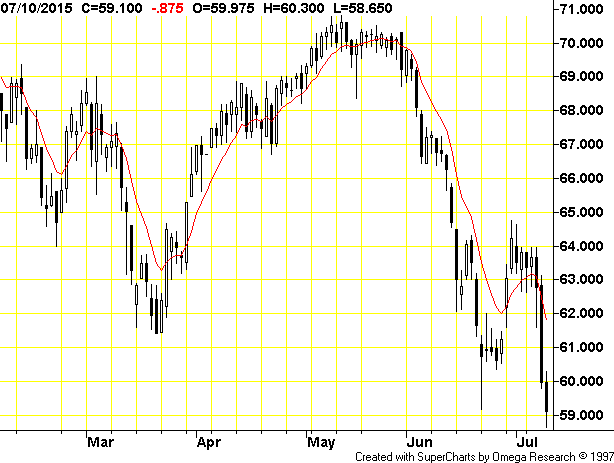 When I posted my last article, December Lean Hogs had closed near their contract lows, around $61.50. The next trading day, Monday, June 22, 2015, we opened weak and then made a spike low at $59.17, which allowed me to sell several December 2015 Lean Hog 50 strike puts for over $1 premium. If you are familiar with options you know even on the lows of the day, I was selling something over $9 out of the money and getting $1 premium so there is a slim chance that I will get exercised and be put long in the market. $1 premium is worth $400 and the highest priced put I sold was $1.15 ($460).

You can see from the chart that December Lean Hogs then stabilized and traded sideways for the remainder of the week. The following week, saw a sharp short-covering rally to just under $65, making my options lose in value. I was able to buy the options back at a much lower price than I had sold them for and I was able to pocket the difference. The options I bought were cheaper now because they were even further out of the money than when they were sold. Each day that we stayed around $64, additional slippage was seen. I figured we would roll back over and retest the bottom, which we soon did. For the past three trading days, December Lean Hogs have fallen hard and on Friday made a new life-of-contract low at $58.65 with a low close of $59.10. Before the $50 strike puts that were about $9 to $10 out of the money when I sold them were valued at around $1. Now that we are trading at lower levels, to get the option that is now about $9 to $10 out of the money, you would have to sell the $48 strike put. You need to go to www.cmegroup.com click here, to view the option prices. The December Lean Hog 46 strike closed at .775, up 10 cents, the 48 strike put closed at $1.10, up 22.5 cents on the day, and the 50 strike put closed at $1.450 up 30 cents on the day. As you move closer to $59 where December futures are trading and are closer to being "in the money" the price of the option increases. If I sell a 48 strike put on Monday to open a position, I am hoping that we open weaker and the premium I receive is closer to $1.30, instead of the $1.10 available on Friday.

Looking at the pricing of the 48 strike put option, that closed at $1.10 on Friday, if we fall another $2 in lean hogs, the price of the option should rise to where the 50 strike option is valued right now ($1.45). Thus if I had sold the 48 strike option on Friday for $1.10 and Dec Lean Hogs fall $2 on Monday morning, the value of the option will rise to $1.45 and I will be losing 35 cents ($140). If however, we rallied $2 on Monday, the value of the option would decrease to $.775 and I would be making 32.5 cents ($130). If a $2 move up on down only changes the option value about 35 cents, then the "delta" is .175. Being so far out-of-the-money it takes a big move of $2 to get the value to change much. The margin I would be charged to sell this option is equal to the delta times the normal margin. Instead of risking a full contract if I was playing the futures and going long a contract, I am selling an out-of-the-money put that is equivalent of risking 17.5% of a full contract. If the full margin was $1200 to sell a full contract, it would only be $210 margin to sell this put. Also consider that if you sold the put for $1.10, they placed $440 into your trading account which is over double the margin. To prevent you from getting too many contracts, the system adds a little extra in there, where the margin may be closer to $400 to $500.

Realize that as you get closer and closer to being "in-the-money" the delta increases. The options at the money typically have a delta of .50 so if Lean Hogs were trading at 58.00 and you sold a 58 put, you would make or lose about 1/2 as much as you would if you were playing the futures contract instead. The rate that the delta changes is called "gamma" but that is not important to understand the basics. For a quick review on the "Greeks" click here.

I should also mention "Vega", which is the amount an option changes for a one point change in implied volatility. I think of Vega as how much air is in the balloon. Heat up a balloon and it expands but chill a balloon and it contracts. That is Vega. If the market is moving wildly up and down, the options are considered hot and the premiums expand. You want to sell options when the Vega value is large. Right now the Vega for December Lean Hog puts are going up in greater amounts each day than one would calculate based on the delta change. For instance, if hogs fell on Monday $2, I previously calculated the option premium should increase from $1.10 to $1.45. But what if it jumped to $1.60 or $1.70 instead. If sentiment turns more bearish the put buyers might bid up the prices beyond what they should have been because the implied volatility has increased. Put sellers are asking for more premium as it is riskier being short options when prices are falling fast and their is greater risk of the option going "into the money" where it might be exercised. When Vega values are low, that is when you want to buy options as they are very cheap (no air in the balloon). The two most important concepts to remember are Delta and Vega.

When a novice first starts trading commodities they often purchase inexpensive calls and puts. This limits their exposure to risk as they cannot lose more money than the option purchase price. However, a vast majority of options expire worthless so the market has to move your way almost immediately. That is why I prefer selling far out-of-the money puts and calls. Sure, there is unlimited risk when going short an option, but there is the same unlimited risk when one buys or sells a futures contract. This so called "unlimited risk" is still a very known risk and the odds are stacked in favor of the seller just like odds are stacked in favor of the "gambling house" in blackjack or poker. If I am trading an option I would rather be the "house" rather than the poor gambler.

To follow along as we short out-of-the money commodity puts and calls, or trade crude oil (UWTI and DWTI), gold, natural gas (UGAZ and DGAZ) and other commodities, join us in our private Short Bull Trading Room on WeChat. Just download the free app on your phone or tablet, and then add "bobed1". You can then send me a message so I can invite you into the room. Still plenty of room.

You can also subscribe to my free weekly newsletter. Send an email to shortbull2020@yahoo.com if interested in subscribing. Again, it is free!