Freeport-McMoRan Inc. (FCX) has fallen 18.5% in the last two days, ending Friday at $12.29. It is starting to look very cheap. I am not saying you should rush in to buy the stock when it opens on Monday, but if you could pick up shares closer to the $10 level, you should be able to make a very profitable quick trade in the stock.

I have a bit of nostalgic fondness for this stock as it used to be one of my favorite day-trading vehicles. Also I rode the stock down from the $20s, to a low of $7.87, back in 2008, and back up to the $20s and beyond. My patience was rewarded.

Those buying at current rock bottom prices should on a long-term basis, also be rewarded when the prices of copper, gold and crude oil improve. However, my current interest in the company is only for a quick scalp, a mere trade. I am looking for a very oversold bounce to occur, once the price stabilizes.

FCX reported earnings on Thursday and the stock has been killed for two days, as reported here. Earlier this year, Morgan Stanley was actually encouraged about the company's prospects and upgraded the stock in April. The bottoming of crude oil helped, along with stability in gold and copper prices. However, now all three markets have weakened and FCX stock has plunged. Here is a five year weekly chart: 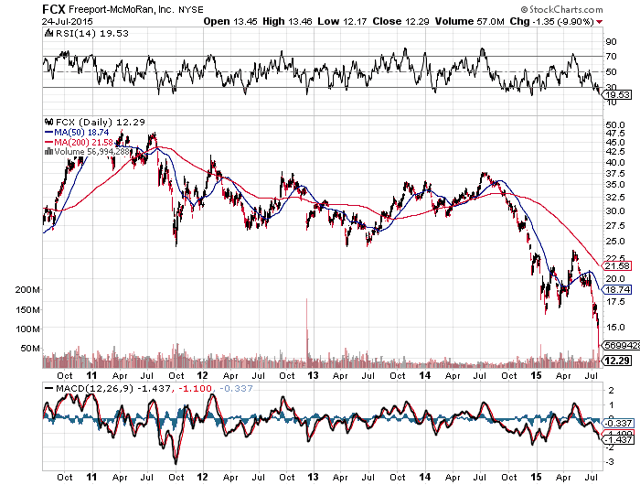 To understand where FCX might again find support, we can look to see how FCX traded during the last hard smackdown back in 2008: Here is a weekly FCX chart going back to that time period: 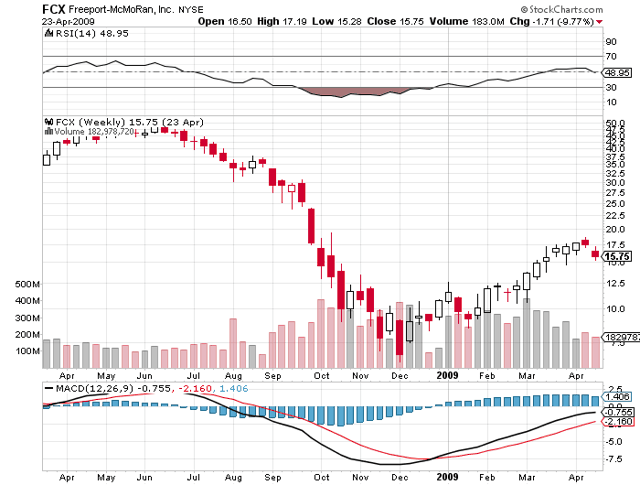 Once FCX does bottom, expect it to trade in a range for 3 to 4 weeks. However, the ultimate low could be a plunge to $8, $7, or maybe $6, but I would expect to see a quick rally back to $10 within a week or so, with every plunge. Since $16 was recent support, it will likely become future resistance, and that is the long-term price level one should target, if crude oil, copper and gold should finally stabilize and rally out of their present holes.

Scale trading in on FCX as it approaches $10 should work out well, as the company is extremely oversold and could bounce.

On an operational basis the company does still earn a profit, but is forced to take big write offs based on lower valuations of its assets. In recovery, the appreciation of these assets should help bolster prices, just as they now are a drag. If copper, gold and crude oil prices remain at current rock bottom prices, FCX will have to take further write-offs which could plunge the stock below $10. However, somewhere around $6 to $8, there should be some real value discovered. The stock has a book value of over $13, and a forward PE of just under 7. The company plans to spin off the oil company interests which should improve the balance sheet and remove the drag of low crude oil prices. In any case, FCX has positive cash flow and can weather the storms for several more years. Just as FCX rallied from $16 earlier this year, I expect it will begin a rally around $10 in the short term with maybe some quick spikes lower.