1) Stocks - Fundamental value investor using Free Cash Flow as defined by Buffett's 1987 shareholder letter. Invest in predictable, undervalued stocks with good management. Buy with a Margin of Safety, Sell at Intrinsic Value. Hold cash when nothing is available at my price. Use the Kelly Formula to determine optimum fraction to invest in each stock which maximizes the amount of money you win over a lifetime of investing.

Store my portfolio - and my brain - on the web at www.healthywealthywiseproject.com
"The trend is your friend - except when it's about to end!"

I sold my 3 remaining stocks today, CCL, JCOM and WDC.  Two were sold at a profit (CCL and JCOM), while WDC was sold at a loss.  On average the three stocks beat the return of the S&P 500.  I did not hold these positions long (4 to 7 months), and all 3 were still below my estimate of Intrinsic Value.

So what made me sell?

For one, some of the smartest market minds I know (ie. John Hussman, Richard Russell, Eric Janszen, John Mauldin, Mohammed el-Arian) are saying that the Bear is back - and stocks in general are headed much lower.  I've posted several of their articles on this site, and here's a link to a recent Hussman article Don't Mess with Aunt Minnie  where he gives a warning similar to his December 2007 call just before the last bear market.

But market forecasts are often wrong.  People will always be forecasting both bull and bear markets.  My intention with my individual stock holdings was to ignore these calls, and hold good stocks thru thick and thin, bear and bull alike - until one day the market recognizes their intrinsic value.

The reason I sold the remaining 3 stocks was that I've been reading the work of Tom Demark.  Tom Demark is a technical advisor to some of the largest trading operations in the world, including Tudor Group and SAC Capital.  His most popular public model is called TD-Sequential, and is designed to "Buy on Weakness" and "Sell on Strength" by identifying what he calls 'trend exhaustion'.  It can be applied to any time interval, from intra-day, to daily/weekly/monthly.  It is said to be more than 70 - 90% accurate, whereas most technical analysis indicators are less than 50% accurate.

In the 'Wealthy' section of the site you'll see I've devoted a page to Tom Demark in order to capture everything I can find about his systems.

The TD Sequential Indicator consists of two patterns, a TD Setup and a TD Countdown. Setups are the shortest in duration, lasting for exactly nine price bars when completed. For example, a buy Setup exists when there have been nine consecutive price bars in which each bar's close is lower than the close four price bars earlier. When a price bar closes below that of four price bars previously a '1' appears below the bar.  If the next price bar also closes below that of four bars earlier a '2' appears and so on. If before price bar 9 is reached a price bar fails to  close below that of four bars previously then the Setup is abandoned and the numbers are automatically deleted. Once nine consecutive price bars have been completed the trader will be looking for a "perfected"  Setup; one that is now valid for trading. A buy Setup is perfected when the low of either price bar 8 or 9 is less than the lows of both price bars 6 and 7. Perfected sell Setups look for a high of either price bar 8 or 9 (or one that follows) that is greater than the highs of both price bars 6 and 7.

When looking at a Weekly time frame, The TD Setup is often the only pattern you need to follow.  Looking at my purchase of CCL (Carnival Cruise Lines) - which I bought last fall at $31.29, you can see it completed a TD-Setup pattern this spring (week of April 19th, 2010).   Based on this indicator I should have sold the following week, which would have been at the 52-week high.  I would then sit in cash and wait for the next TD-Setup pattern (this time for a Buy) on this stock.  Nevertheless, this was a profitable trade for me, though not at the yearly high. 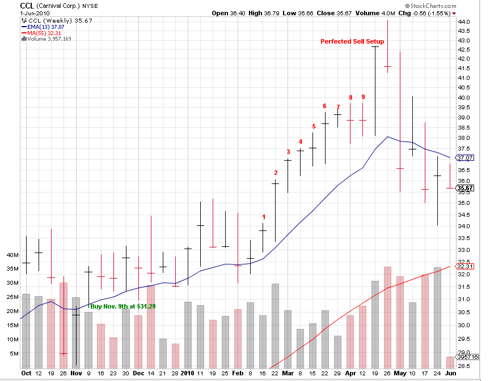 The second stock I sold today was JCOM (j2 Global Communications).  JCOM was purchased on February 1st, 2010, during what turned out to be Week 2 of a TD-Setup.  It was good - if lucky - timing.  The Setup was completed the week of March 22nd.  One method of assuring the trend is over is by waiting for a Trend reversal, or Flip Week, where in my case the price closes lower (for a Sell Setup) than the price 4 bars earlier.  This occurred the week of May 3rd and is indicated on the chart below. 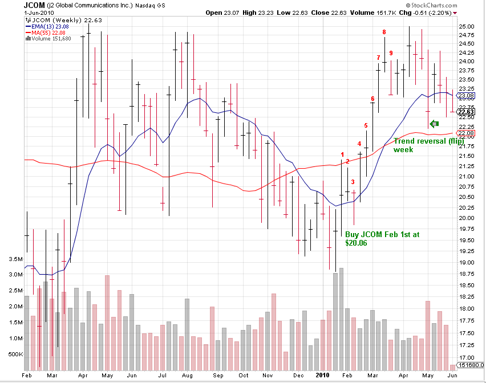 My third and final stock sale of the day was WDC (Western Digital Corp.)  It was sold at a loss, and according to Tom Demark Indicators, it never should have been purchased in the first place.  To see why, we need to learn about the second half of TD-Sequential, called 'Countdown'.

As seen in the chart below, prior to my purchase on February 1st, 2010, WDC had completed a full TD-Sequential Sell signal in the prior year - ending the week of November 9, 2009.  According to Demark, this is a powerful sell signal and we should not purchase this stock until the current situation is cleared by a new TD-Sequential Buy signal.  My purchase on February 1st, 2010, violated this rule, and not unexpectedly I suffered a slight loss with the sale today. 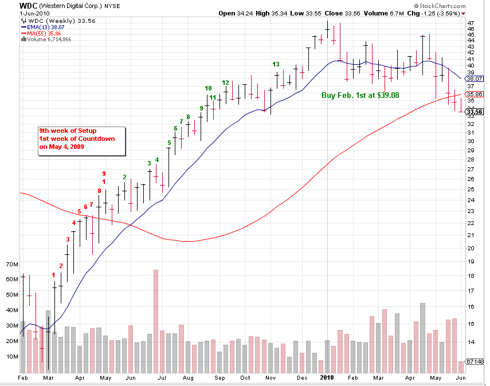 Technical Note:  A close inspection of the WDC chart will find additional 9-bar Setups, including one that ends at the 52-week high around January 1st, 2010.  These reinforce the Sell signal for WDC.

Many analysts calculate the Intrinsic Value of WDC to be above $100 per share.  So it would seem that buying  (or holding) today at $33 is a bargain.  But Tom Demark would say that a better entry point lies in the future for this stock.

The Future
Do I plan on following these Demark Indicators all year long with each stock, trading in and out?  No, not exactly.  These 3 stocks were sold today based on my readings of the market environment, in addition to the Demark Indicators.  I don't wish to do too much trading, I'd rather buy and hold for a 1-2 year period until the value is recognized by the market.

My plan is to use the TD-Sequential (and other Tom Demark Indicators) to find low-risk entry points for new stocks (and avoid High Risk entries like WDC).  In addition to these 3 stocks, I have several other stocks which have recently fallen below Intrinsic Value - but I'm watching and waiting for the Demark Indicators to tell me when to enter.