trading stocks, currencies and commodities for more than 10 years. allways happy to learn new things and anyone i meet can be a teacher. i love to use technical analysis as a primary tool for investments or trades.

NOKIA- (NOK)
seems very positive for the medium term (6 months- 1 year) how ever it already went up by about 145% over the last 5 months.
now we have to decide what is the best price to buy the stock at.

in order to do that i recommend to use at least 3-4 charts of daily, 4 hours,1 hour and half an hour chart.
only if all of the charts show a similar analysis that points out to the same direction/trend- is when we can tell that the analysis is reliable.
if each chart shows another trend than we will rely only on the longer chart (the daily).

in order to keep things simple i will use only the 1 hour chart.

because the Bolinger band starts to open horizontally i believe we are only in the middle of the down trend.

i expect Nokia to drop at least until the price of $3.5-$3.75.
this area will be a great price to buy the stock just before it picks up once again. 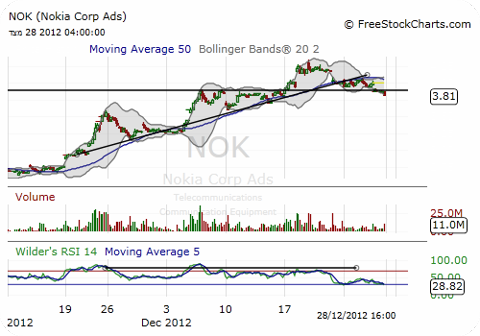