Not much happend over the weekend.

That being the case, I'm going to take the time to catch up on our Top Trade Reviews, as we haven't done one since Sept 13th, which closed out 2017's trade ideas at 54 winners and 9 losers for an overall 85.7% winning percentage for the year. This is why Top Trades is such a successful part of our subscriber base while, in fact, Top Trades only represent a small fraction of the trade ideas we discuss in our Live Member Chat Room - which you can SIGN UP FOR HERE (subtle marketing ploy).

Of course, one of the reasons we like to do reviews is to look at the losers, as they are often the ones that offer great new entries with a chance to turn around. As Fundamental Investors, we are more likely to be wrong about our timing than wrong about a position in general so a stock that goes the wrong way after our pick can be a great opportunity to jump in for a better price.

Top Trade Alerts are sent out from our Live Member Chat room and are usually the trade of the week that I think has the highest likelihood of being successful. We are developing a platform called "Trade Exchange" that will roll out this year to make our text alerts actionable so the pressure will really be on to perform in this segment.

Our first Top Trade Idea of 2018 came right on Tuesday, Jan 2nd with Chipotle (CMG), which had been crushed on another food poisoning scare but we thought the damage was overdone but, as noted, I didn't expect the kind of rebound we had - we played it conservatively, though we did play it more aggressively later in the year.

Let's make that the first official trade for the new LTP!

What's great about this trade is that, even if CMG goes lower, we can recover our money just through the quarterly short call sales. Makes it hard to lose!

Tuesday, Jan 16th was our next Alert (if we don't see something we really like, we don't send out an Alert) on Cabot (CBT), who are a specialty chemical maker we like because they are heavy into graphine, which is the material of the future - though not the near-term future, it seems - as CBT fell off a cliff after an October earnings warning. Fortunatley, we had taken a very light position which was:

Also that Tuesday, we sent out another Alert for H&R Block, who we always like to buy into tax season (like now!) and they've had quite a ride since. Our trade idea was:

They are very reasonably priced at $26.65 and they do pay a 3.6% dividend so I really don't mind owning them long-term.

That is a very key takeaway from our trading stragegy - it's much easier to have an 85.7% success rate when you stack the odds so firmly in your favor on every trade. HRB DROPPED 0.02 over the course of 12 months so ALL of our gains came from premium decay. We were Being the House - NOT the Gambler in our trade entry and we sold all the risk to other suckers who thought that HRB would be below $25 or over $27 but, as we expected, it went net nowhere for the year so we kept ALL of their money, which more than offset the loss of our own $1.25 of premium that we paid for the $22 calls.

Friday, Jan 19th, 2018 we added some hedges to our Short-Term Portfolio, which is usually net bearish "In case the market fails to surrender" - our STP was a massive outperformer this year and we tend to forget that, from time to time, we hedge our hedges as well. Our trade ideas at the time were:

edge #1 is SVXY, which is the Ultra-Short VIX ETF. This is going to be an actively managed trade:

We can do something similar with the Dow for the STP in something we used to call a Mattress Play.

At net $24,550 we're buying $40,000 in protection but we anticipate selling March, April and May puts for $6,000 more and this is the kind of spread we roll along all year. Upside at the moment is $15,550 so not too sexy but these are hedges we work into and, of course, with DIA at $260, the only way we DON'T get paid in full is if the Dow goes higher – which better mean we're making money on our LTP longs.

So here we have about $60,000 in downside protection for our LTP but we also like the STP to make money so, assuming we lose about $20,000 (half of what we're spending), let's find a couple of puts to sell.

That's $22,450 collected in premium that will mostly expire this year and, if the stock goes south, these are Watch List stocks we'd be happy to turn into long-term positions in the LTP and, don't forget, if they go down – it's probably because we're making $60,000 on our hedges!

Don't forget, the primary purpose of the STP is to protect the LTP so we look, generally, for opportunities that will make money if the market heads lower. If the market goes higher, the $500,000 LTP should easily cover any losses in the $100,000 STP.

The TSLA short calls turned the set into a net loss but, of course, we rolled those along and eventually took the win. IBM is now our 2019 Stock of the Year while ABX is now GOLD (merger) and we still love them this low.

Tuesday, Jan 23rd, we like OIH in our Butterfly Portfolio, where we sell a lot of short-term premium against our long-term positions.

This will be our first trade for the Butterfly Portfolio!

OIH is a nice, rangy play that's not likely to go up or down more than 20% but should give us good action in between so it's good for a neutral play where we sell puts and calls. Of course the key to liking a butterfly is seeing how cheaply we can protect it and we only need to protect the outside of our roll, not the whole thing so we can buy:

The most complicated thing about a Butterfly trade is learning to be patient and letting it play out. Generally, we only make adjustments once a month, during expiration week and, even then, only on contracts close to expiration or way off track. Otherwise, this portfolio is the embodiment of Being the House and constantly selling premium.

If you are a Top Trade Member – be aware that we do not send out adjustment notes. The idea is simply to keep selling short-term puts and calls against the long position and you can follow them in chat as a Trend Watcher or higher Membership.

Thursday, Feb 1st, there were 4 banks I liked and all 4 got killed in the recent crash so I'm goin to pause here and give them time to recover a bit more before reviewing February. If they go lower, they'll be good for new trades and, if they go higher - then we're back on track.

This morning, the markets are down about a point on a poor industrial report out of China backed up by TERRIBLE earnings/guidance from DLNG, VALE, NVDA, GOGL, PCG, CAT and AMD as the effect of the Trade War, Brexit and the US Government shutdown ripple through to the private sector. This is the biggest earnings week of the quarter with hundreds of companies reporting, including: 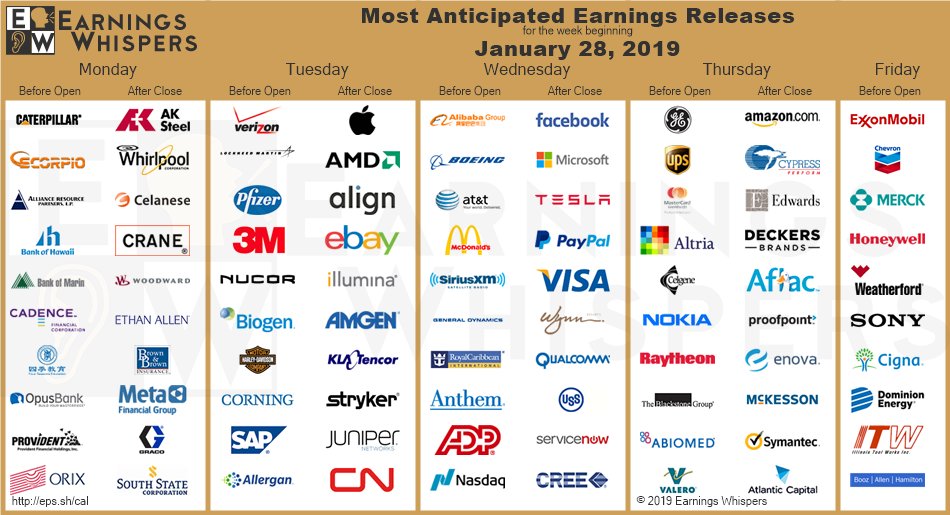 There's no Fed speak this week as they have a meeting and announcement on Wednesday (2pm) and we'll hear from Powell after that so, of course, we'll be going long into this downturn once it finds support UNLESS the 50-day moving averages fail and then our Strong Bounce Lines - in which case it will be every man for himself!

This is the data schedule for the week but a lot of Government data was delayed and will still be slowed due to the shutdown - so it's hard to count on the calendar at this point: It's easy to pick winners in a bullish market - the trick is to KEEP your money in a bearish one!

Be careful out there,