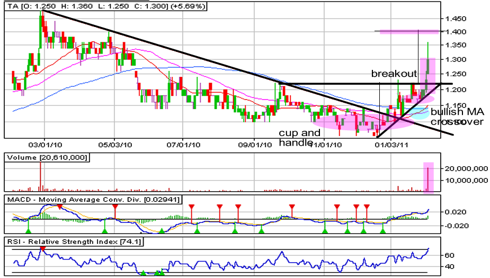 Trans-Asia Oil and Energy Development Corporation or TA in the Philippine Stock Exchange is a company that is involved in power generation, and oil and mineral exploration business. Like one of its partners in the drilling of several oil wells, Petroenergy Resources Corporation (PERC), TA looks to be on the verge of an upswing in the days to come as well at least from a technical point of view. As you can see from its day chart, TA has already escaped from its long term downtrend line. The other day (January 31, TA broke out from a cup and handle formation. This move was confirmed yesterday when its 5.69% gain was accompanied by a relatively large volume.

Yesterday’s breakout could swing TA towards its upside target of PHP 1.40 (gauged by projecting the height of the cup from the point of breakout). Another bullish indicator that suggests a possible move higher was a bullish crossover (highlighted in light blue) of the moving averages. Usually, when the red moving average crosses over the other two MAs signifies a switch in trend. On the down side, TA could likewise weaken because of its overbought condition. If it does, it could once again revisit its support around PHP 1.22.