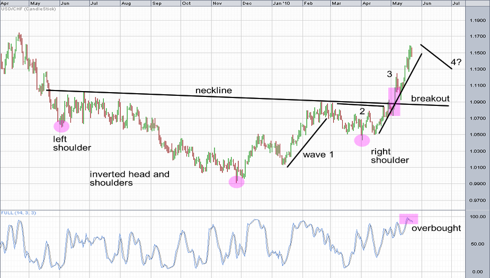 The USD/CHF broke out of an inverted head and shoulders formation during the start of May. Since breaking the 1.0900 resistance, the pair has continued its ascent. It seems, though, that the Swiss Franc is bound to rally against the greenback any time soon given the present overbought conditions. Moreover, based on the Elliot Wave Theory (EWT), the pair could be starting to mark its fourth wave. Remember that according to EWT, a wave is composed out 5 smaller waves. In an uptrend, waves 1, 3, and 5 are impulse waves while waves 2 and 4 are corrective. EWT also notes that in a 5-cycle wave, wave 3 is usually the longest. So if that’s the case, wave 4 could indeed be in the making.

Risk aversion from the market due to the ongoing Greek drama has caused investors to leave the anti-dollars like the euro, pound, and Swissy for the safety of the USD. The increase in the demand for the safer currency is very evident in the USDCHF’s rise. Notice that the US dollar has rapidly appreciated after temporarily hitting a low on April 2 (marked as the tip of the right shoulder). However, the rumor that the Swiss National Bank will come in and intervene in the forex market to support the CHF has caused the currencies like the EUR to rebound yesterday. This speculation, though, had a very minimal effect on the Swissy.

Note that the SNB is very notorious in getting involved in the fx market. Hence, there is an outside chance that the central bank could really do so in order to prevent the rapid depreciation of the CHF and to promote price stability. If and when this happens, we could see a correction in USDCHF which would technically mark its wave 4. Still, I think that the general investing community would resume buying the dollar until the euro finds a workable solution to the Greek debt crisis. On the Switzerland’s side, in my opinion, they would gradually let the CHF lose some of its value since such is beneficial to their economy, particularly to their export industry.