Vernon Martin is the principal of American Property Research, a commercial real estate advisory and appraisal firm in Los Angeles. He has appraised commercial real estate in 20 countries, 41 U.S. states, and four Canadian provinces over a 30-year career. He also formerly taught Real Estate Valuation at California State University, Los Angeles between 1998 and 2005 and has authored many professional journal articles and two books. He has degrees from the University of Chicago and Southern Methodist University, where he earned a Master of Science in Real Estate degree.

After visiting the vacant New South China Mall in Dongguan, China, and hearing of many other vacant new malls in China, I turned my attention to the coming IPO on the SGX (Singapore Exchange) for the Perennial China Retail Trust (PCRT), a property trust organized to develop new malls in China. I was naturally intrigued to know the rationale behind this IPO, which was originally scheduled to go public in March but was then delayed until June 9th and priced 30% lower. The rationale may become more apparent by the end of this blog.

Only one of these projects has been completed -- the 3 million square foot Shenyang Red Star Macalline Furniture Mall, a nine-story furniture mall which was said to be 91.8% occupied at the beginning of 2011. This mall exclusively sells home furnishings, building materials and furniture. The property manager is Red Star Macalline Furniture, China's most successful furniture retailer, with 66 stores throughout China, double the number of stores open in 2007.

China Daily reported in March that home improvement retailers in China are facing growing challenges. French retailer Saint-Gobain recently shut down all its Shanghai stores, stating that "the individual demand for interior settings is dwindling since more housing and apartments will be sold with interior decorations. Our business, which is based on individual demand, becomes increasingly difficult." Likewise, Home Depot has closed 5 of 12 stores in China, and British home improvement chain B&Q has closed 22 stores (including Shenyang) and reduced the size of 17 stores out of a total of 63 stores in China. Perhaps the foreign retailers don't know how to compete with Chinese retailers, but a recent statement from a VP at China Building Materials Circulation Association sounds ominous: "The need for building materials is falling because people, even those needing houses to get married, are watching the property market instead of buying houses and decorating them. They expect housing prices to fall significantly."

That's the problem with the furniture, home furnishings and building materials industry -- it is dependent upon a robust housing market, and if that market were to deflate, like it did in the U.S. and U.K., Spain and Ireland, this industry will deflate, too. This would suggest that furniture malls could experience high vacancies during the next Chinese recession.

Moreover, Chinese properties are all leasehold, limiting the potential for long-term capital appreciation.  The remaining lease terms of the properties in the Trust range from 38 to 40 years.

The remainder of the PCRT portfolio

The even-larger, adjacent, Shenyang Longemont Shopping Mall (3.5 million square feet) is scheduled to open in the third quarter and is said to be only 51.8% pre-leased to 185 tenants. The other projects will not be fully completed until the end of 2014. PCRT also claims to have S$3 billion (Singapore dollars, worth about 81 U.S. cents) worth of purchase options for commercial sites next to the coming High Speed Rail in China.

CEO Pua Seck Guan stated, "Among all the markets that I'm familiar with, I think that China offers the most exciting and best potential. The reason being, one, today you can get real estate at a very attractive price, and you can see the yield that you can get. Therefore you can see the arbitrage of the physical market value into a capital market. “

If that statement doesn't make sense to you, you can understand why I'm skeptical, too. China has a growing number of mostly vacant malls which can probably be obtained at “a very attractive price”, which makes me wonder why PCRT management has elected to develop, instead, particularly in Chengdu, which is even poorer than Dongguan (site of the failed New South China Mall) and in Shenyang, which has a 17% retail vacancy rate and tens of millions of square feet of other malls scheduled for completion in 2011. Foshan, the third mall location, is located in the overbuilt Guangdong province.

It is interesting to see how the 594-page PCRT prospectus has placed a positive spin on a February 2011 feasibility study from Urbis of Australia that presents more cause for concern, particularly about Shenyang, where three of the five properties are being developed. The IPO prospectus represents the Shenyang retail occupancy rate as 95 to 100%, but the feasibility study indicated an overall 83% occupancy rate for Shenyang shopping centers, most of which were built in the last decade. The report also mentions other competitive malls under construction in the same East Zhongjie neighborhood, such as:

The report goes on further to indicate 749,000 square meters (more than 8 million square feet) of new mall and department store space being completed in the next two years in the Golden Corridor, the main retail district in Shenyang. The Golden Corridor is within the defined secondary trade area of the PCRT malls. 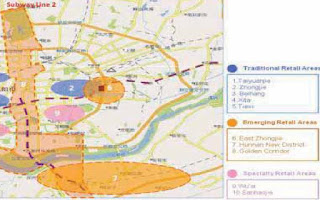 As for local spending power, the study indicates annual retail expenditures per capita of just RMB 8926, or about $1377 USD. Is this supportive of “mid to high end retail”?

The feasibility study’s conclusion would offend any numerate person:

"Given the expectation for continued strong economic growth and growth in personal incomes, the impact of any ‘oversupply’ is likely to be reasonably short, with the market adjusting over the following couple of years."

This would imply that a quadrupling of retail space in East Zhongjie could be matched by a quadrupling of local retail spending within two years. Anyone who has completed Lesson 1 of Economics 101 would be skeptical of such a conclusion. The report does not even present a quantitative analysis of supply and demand.

Despite the deluge of new space being developed, the Sponsor has assumed a 1% vacancy rate for the retail malls and continued 6% growth in rental income.

The Red Star Mall has opened to reported occupancy of 91.8%, but will a one-concept mall have staying power. particularly if the housing market was to recede?
As far as the talk of “yields you can see” is concerned, only the Shenyang Red Star Mall is producing income at the moment, and the malls in this trust will not be fully operational until the end of 2014. The IPO sponsor has forecasted a 5.3% yield in 2011, a tall achievement from mostly unfinished malls.

The reason for an IPO outside China

The use of an IPO on a foreign exchange to get financing is a result of the Chinese government’s crackdown on commercial real estate lending by banks. Escalating reserve requirements have hamstrung the ability of Chinese banks to lend on commercial real estate development, so developers must look outside China for financing. Somehow, sponsoring a risky real estate project on a foreign stock exchange gets taken seriously as an investment grade project.

The valuation report that accompanied the prospectus, conducted according to the standards of the Royal Institution of Chartered Surveyors, did not disclose that the appraised values were based on an "extraordinary assumption" that all the properties were already completed and fully leased until the Appendices section of the report. In the U.S., prominent disclosures of such extraordinary assumptions affecting appraised value are legally required in the body of the appraisal report; it surprises me that squeaky-clean Singapore does not require disclosure of misleading “extraordinary assumptions” for a public IPO.

Moreover, the valuation report in the prospectus did not even consider that PCRT was acquiring only a 50% interest in the Shenyang properties, so they mistakenly appraised the portfolio for 10.152 billon RMB (about S$1,932,000,000) and PCRT was the one to make the adjustment for 50% ownership in the prospectus. The appraisal firm was CB Richard Ellis.

Investors need to realize that whenever an IPO sponsor orders an independent appraisal or feasibility study, that such a study cannot be considered truly “independent”. The only independent study investors can rely on is one they order for themselves. Sorry to say this, being an appraiser myself, but too many appraisers are paid whores.

How the sponsor benefits from the IPO

So given the risk and uncertainty, what’s in this IPO for the Sponsor? The sponsor is appointed as the “Trustee-Manager” and is compensated as follows:

1. An annual base fee of .35% of appraised value up to S$10 billion. Based on the inflated CBRE appraisal of $1.1 billion, the Sponsor would be owed S$3,850,000 this year.
2. A performance fee of 4.5% of net property income (on top of the management fee paid to the actual property manager, Red Star Macalline).
3. An annual trustee fee of .03% of appraised value, or S$330,000 this year.
4. An acquisition fee of 1.35% of the acquisition price of the properties in Shenyang and Foshan (S$820,000,000), which would provide the sponsor another S$11,000,000 in compensation.
5. Development and property manager’s fees of 2% of gross revenues + 2% of net property income + .5% of net property income.
6. Leasing commissions of two months’ gross rent for newly completed or renovated buildings.
7. A divestment fee of .5% of the sale price of any real estate sold or divested.

The prospectus also indicates that PCRT's sponsor will earn S$141,800,000 in acquisition and development fees for the Chengdu Mall and S$121 million for the Foshan Mall, neither of which PCRT has title to yet. So development seems to be a profitable option for PCRT's sponsor, no matter what.

The bottom line is the Sponsor is superbly compensated no matter what happens to the properties in this portfolio, much as a real estate syndicator is. The piece de resistance in this scheme is that the Trustee-Manager can only be removed by a 75% majority vote of the unit-holders, so desperate is the Trustee-Manager to hold on to this gravy train. This is even disclosed as a risk in the prospectus: “There may be difficulty in removing the Trustee-Manager.”

My overall opinion of PCRT is that it is bad for investors, but good for the sponsor.

My skepticism does not count for much. What does the market think?

The IPO was originally priced at S$1 per share, then 70 cents SGD per share. Trading in PCRT on the SGX started on June 9th at 65.5 cents per share, and in the two weeks since, the unit price has declined to 59 cents per share for a market capitalization of S$661,800,000, which is 41.6% below valuation.

Disclosure: I have no long or short position in this stock, but will reconsider after visiting the properties in September.