The fight between David Einhorn and Bruce Berowitz continues over the merits of St Joe (NYSE:JOE), a real estate development company based in Florida.  According to Short Side, which tracks borrowing of shares for short selling, 40% of institional investors’ shares are currently borrowed.

Berkowitz owns 29% of the company’s 93 million shares, and he’s presumably not making them available to short sellers.  Or maybe he is in order to generate added revenue from lending.  Fairholme, Berkowitz’s hedge fund, is a long/short fund so Berkowitz is familiar with borrowing rates and the revenue that can be generated from securities lending.

The cost-to-borrow shares of JOE was low all through 2009 and 2010 up until Einhorn outlined his reasons for shorting JOE at the Value Investors Congress on October 13, 2010.  On that day, the cost-to-borrow increased from an average of 95 bps to 230 bps as investors at the Congress undoubtedly made calls to their brokers.  Shares borrowed in Lending Pit increased by 2 million shares on October 13.  The following day, the cost-to-borrow increased another 170 bps to 400 bps.  Since that day in October, however, the cost-to-borrow decreased slightly and remained below 300 bps.  However, on January 14, the cost-to-borrow started to increase rapidly.  Currently the cost-to-short is 3900 bps.  This is despite the fact that only another 1.5 million shares have been borrowed.  So it seeems that the increase in cost-to-borrow has more to do with constraints on the supply side.  So not many more short sellers have entered into the trade, but everyone is paying much more to stay in the position.  Also, JOE’s share price has risen 44% over the past three months, so short sellers are feeling pressure from all sides.

Einhorn’s reasons for shorting JOE in the first place are still compellling, but Berkowitz is doing his best to steer the company in a new direction.  Berkowitz just won a battle with JOE’s current management and JOE’s current C-level executives are stepping down and Berkowitz is regaining several seats on the board.

JOE also hired Morgan Stanley to look at selling the company.  Whether JOE would be able to get a good price remains to be seen.  It also remains to be seen whether short sellers will be forced to exit the trade or continue to hang on with the increasing borrowing costs. 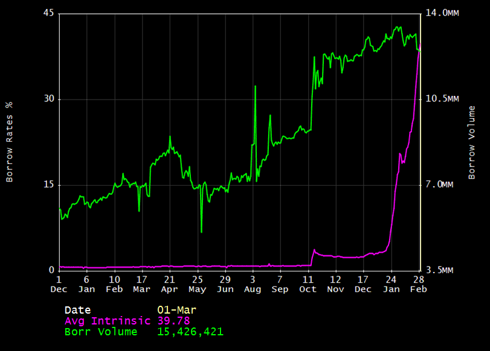