On June 30, 2010, the SEC announced its intention to expand the circuit breaker pilot program to many more stocks and, for the first time, ETFs. Public comments have expressed concern that, when applied to ETFs, circuit breakers may themselves create market disruptions. If a circuit breaker is triggered, whether appropriately or erroneously, for a widely-traded ETF, HFT firms major market participants may pause trading and deprive the market of liquidity when it is most needed. Once an ETF selected for the pilot program triggers a circuit breaker, firms which trade the basket of underlying stocks may also step away for five minutes until trading in the ETF resumes. In such a scenario, the impact on the liquidity of stocks underlying a halted ETF will demonstrate whether the circuit breaker program meets its objectives in practice.

Not all ETFs have been selected for the circuit breaker pilot program. NYSE Euronext compiled a list of 344 ETFs ("piloted ETFs"), as reported by Index Universe, utilizing a volume cutoff:

"NYSE Euronext, the parent company of the New York Stock Exchange, developed the list of 344 ETFs in consultation with other major exchanges and the Financial Industry Regulatory Authority.

"NYSE Euronext winnowed down the universe of U.S. ETFs by excluding products whose average daily trade volume was less than $2 million worth of shares, it said in a press release."

This criteria for selected ETFs produces some interesting and potential trading scenarios. For example, SPY and IVV, two ETF's which track the S&P 500, are included in the proposed expansion of the circuit breaker program. Therefore, if one of these two ETFs triggers a circuit breaker, will the market simply move to trade the other ETF until five minutes passes? What are the odds that both SPY and IVV will simulateously trigger circuit breakers? (This is not a rhetorical question.)

To address that possibility, we start with a summary of ETFs which may serve as substitutes (or proxies) for three broad market ETFs: SPY, QQQQ, and IWM. 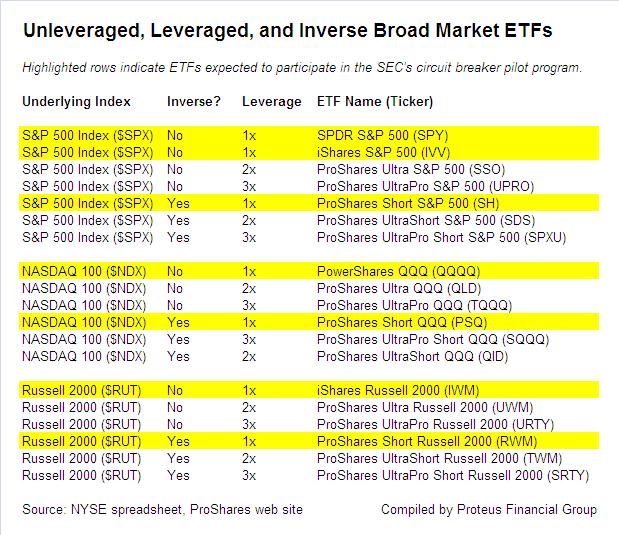 Those ETFs participating in the circuit breaker pilot program are only unleveraged (long and short) versions of their underlying indices. The obvious choice for trading through the duration of a circuit breaker would be to use a leveraged (long or short) ETF, sponsored by ProShares. The remainder of this analysis studies how effectively these ProShares ETFs followed their stated leverage ratio during 2010 Q2.

First a definition of the term "leverage ratio" as utilized in this analysis. To take an example, the ProShares Ultra S&P 500 (NYSEARCA:SSO) has a stated objective of going up or down twice as much as the S&P 500 index, on an intraday basis. Hence, the stated target leverage ratio for SSO is +2. Conversely, the stated target leverage ratio for ProShares UltraShort S&P 500 (NYSEARCA:SDS) is -2 because SDS moves in the opposite direction to the S&P 500. By looking at the returns of leveraged long/short ETFs over 5-minute intervals during 2010 Q2, we compare their returns to the underlying index by utilizing linear regression analysis. These regressions are constrained to have a zero alpha (zero intercept) so that the resulting beta (slope) provides a useful (albeit not perfect) measure of the leverage ratio. Each regression compares a single ETF to its underlying index, ignoring any 5-minute intervals when such ETF did not trade. Otherwise, volume has no impact on the regressions. By constraining the alpha to zero, the following graphs need to display only the slope (termed the "observed leverage ratio").

The closer an ETF trades to its stated target leverage ratio, the better such ETF may serve as a proxy if another related ETF triggers a circuit breaker. How well might various leveraged long/short ETFs of the S&P 500 index serve as proxies to SPY, IVV, or SH? The following graph shows the consistency of the leverage ratio for every trading day furing 2010 Q2. 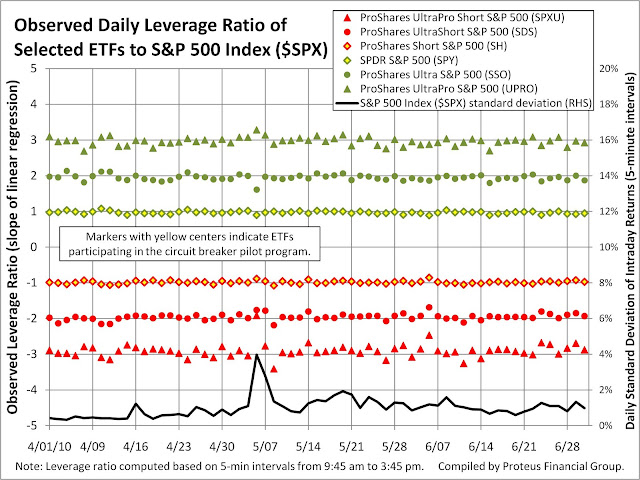 (For convenient viewing throughout all graphs, those ETFs which will be subject to circuit breakers have markers with yellow centers. For graphs pertaining to the S&P 500, the iShares ETF is excluded so that the higher-volume SPDR ETF is easier to view. On graphs plotting the observed leverage ratio over time, a black line represents the daily standard deviation of 5-minute returns to help compare deviations in the observed leverage ratio to underlying index volatility.) 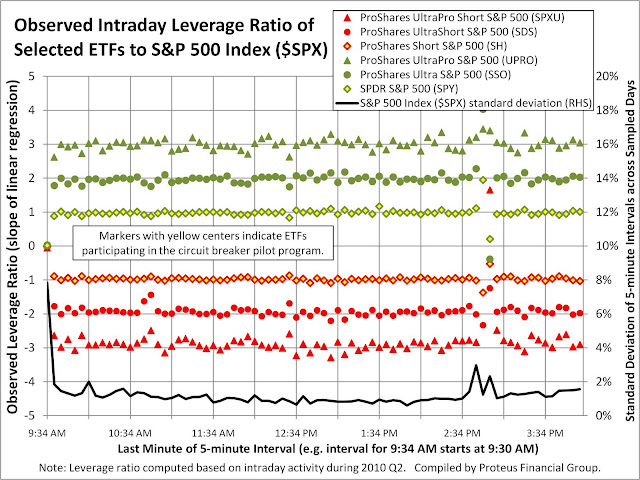 During certain times of the day, on average, the observed leverage ratio tended to deviate from the stated objective. Most likely (especially between 2:30 and 3:00) these deviations reflected aberrant activity on specific days (e.g. May 6), as opposed to repetitive behavior during most trading days. Interestingly, the interval from 9:30 to 9:34, where 5-minute volatility is highest overall, shows the largest discrepancy in observed leverage ratio. Currently, the SEC does not apply circuit breakers during the beginning and end of regular trading hours (9:30 to 9:45 and 3:45 to 4:00).

Switching from a time-based perspective, the next graph shows the observed leverage ratio according to the return in the underlying index during 5-minute intervals. 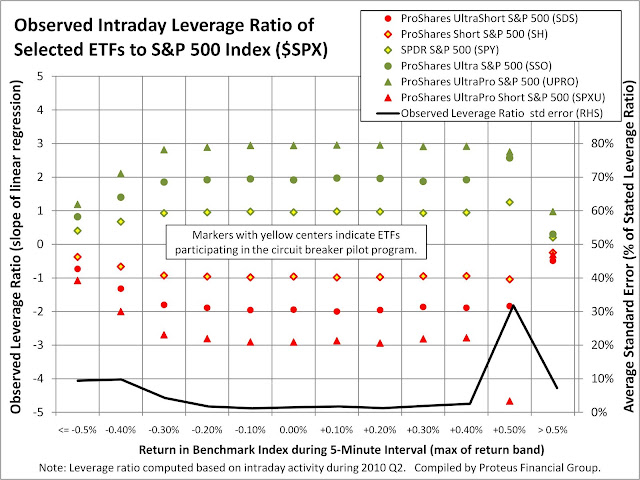 All ETFs based on the S&P 500 traded close to their stated target leverage ratios as long as the underlying index did not rise or fall more than 0.40% within any 5-minute interval. As the underlying index became more volatile, the observed leverage ratio tended to shrink. Note that as the magnitude of change increases, the number of historical data samples drops, which may in turn reduce the regression quality and increase the standard error of the slope (beta).

In the same manner, we can determine how well various leveraged long/short ETFs of the NASDAQ 100 index served as proxies to QQQQ or PSQ. The following two graphs plot the observed leverage ratio over time, first daily followed by intraday, and roughly follow the patterns seen in the graphs for the S&P 500. For the ProShares triple-leveraged ETFs, SQQQ and TQQQ, the observed leverage ratios deviated from the stated target levels more so than for the corresponding ProShares ETFs tracking the S&P 500 . 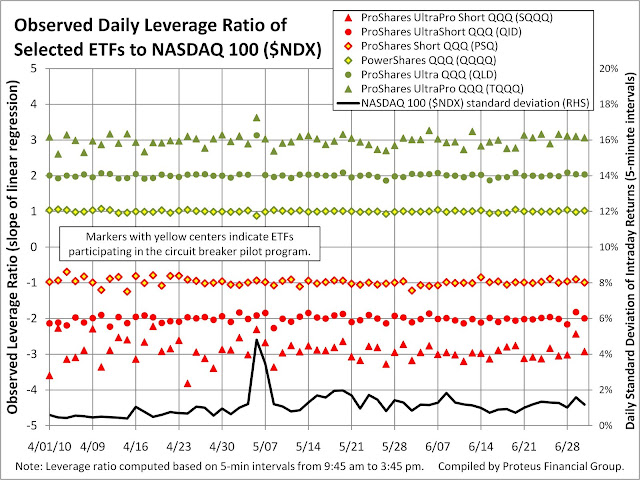 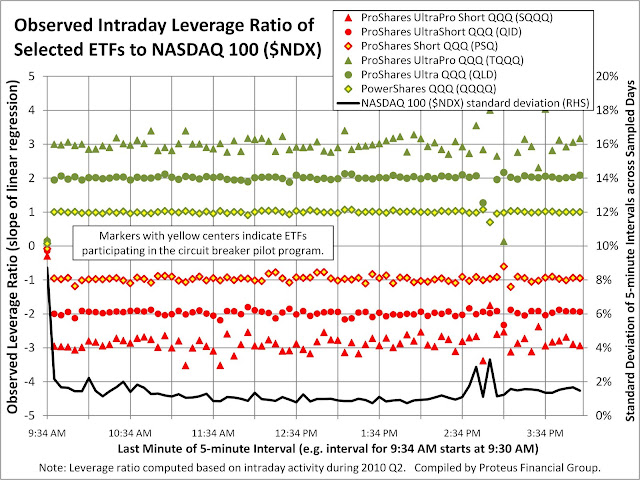 According to the return in the NASDAQ 100 during 5-minute intervals, the following graph shows that the observed leverage ratios for the related ETFs tracked their stated target levels most of the time. Only when the Nasdaq 100 index rose or fell by more than 0.40% did the observed leverage ratio begin to decline. In this case, the spike in standard error which we observed for the S&P 500 is not present among the ETFs which track the NASDAQ 100. 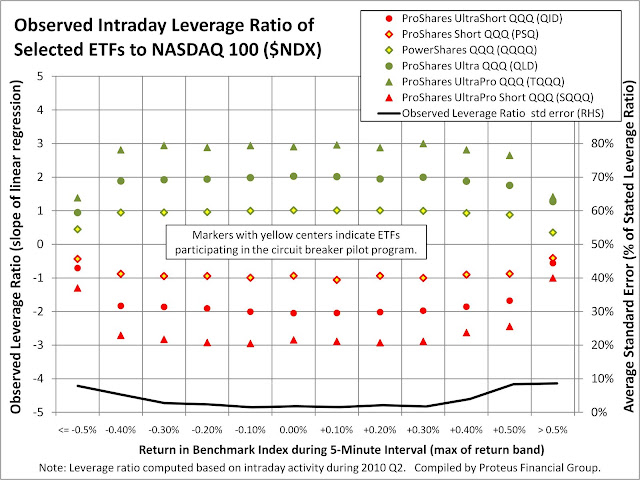 Finally, we can determine how well various leveraged long/short ETFs of the Russell 2000 index serve as proxies to IWM or RWM. The following two graphs plot the observed leverage ratio over time, first daily followed by intraday. 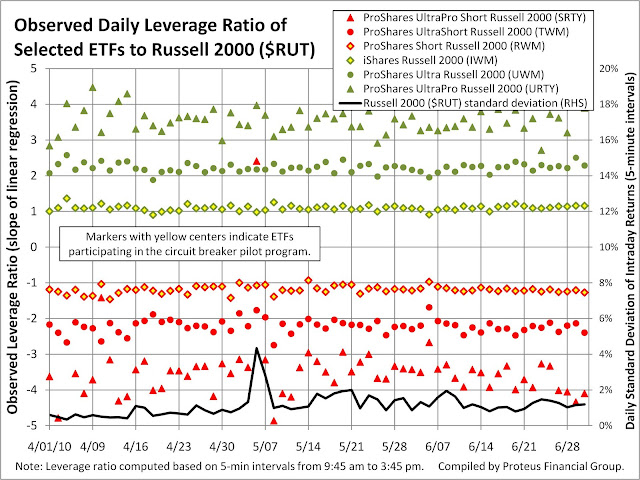 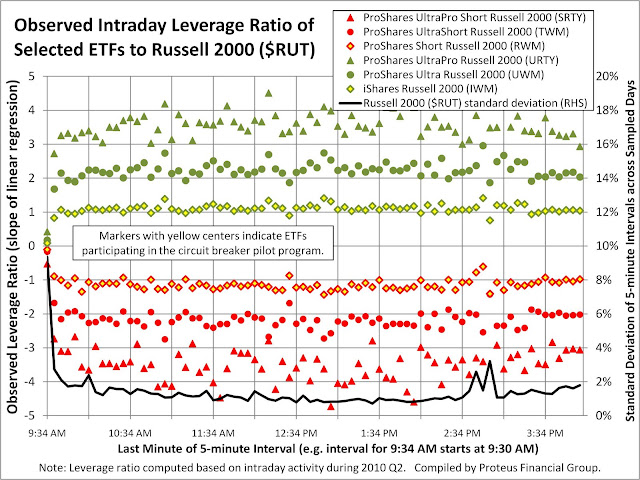 In this case, the observed leverage ratio of the ETFs fluctuated even more from their stated objective than for the ETFs which track the NASDAQ 100. Could these fluctuations be the result of lower trading volume in the ETF and its component stocks? Additional analysis further below should address this question. 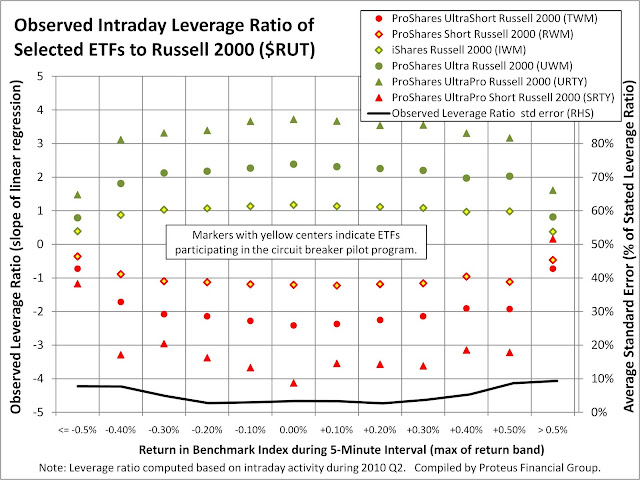 The following three graphs compare the daily volume of the ETFs listed above (except for IVV). When selecting ETFs to include in the pilot program, the SEC focused on the highest-volume ETFs for the three broad-market indices. In addition, the corresponding unleveraged inverse ETFs had respectable volumes but lower than some of their leveraged counterparts. (Note the log scale for the vertical axis.) 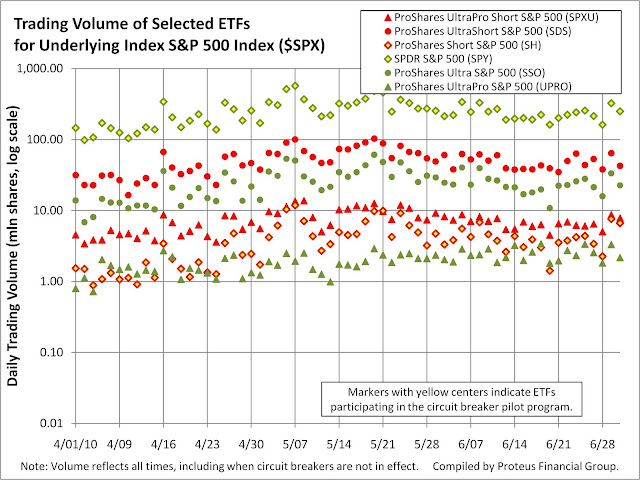 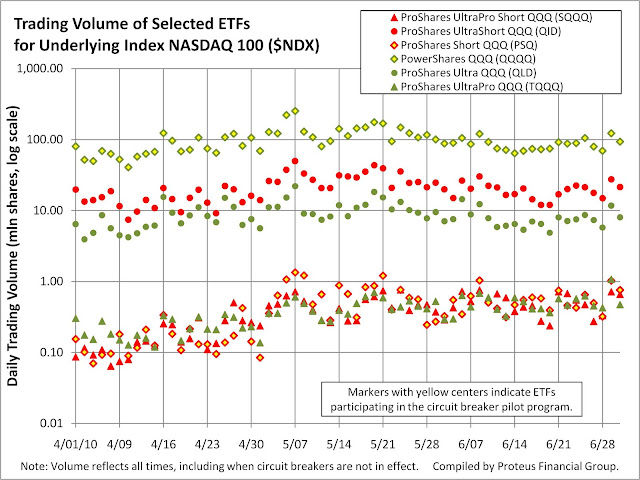 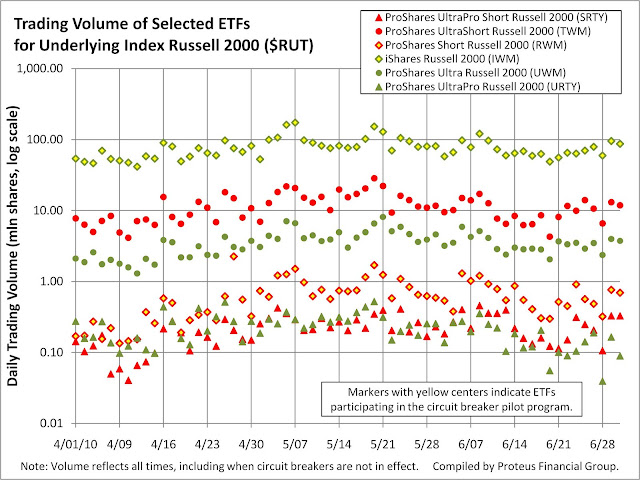 In fact, for all three indices, the double-leveraged ETFs (both long and short) traded with materially higher volumes than their corresponding unleveraged short counterparts. The same conclusion can be drawn from the following three graphs, which plot average intraday volume during 5-minute intervals according to the 5-minute return in the underlying index. (Note that the graph plots average, not total, 5-minute volume because not all ETFs traded during every interval in every trading day of 2010 Q2.) 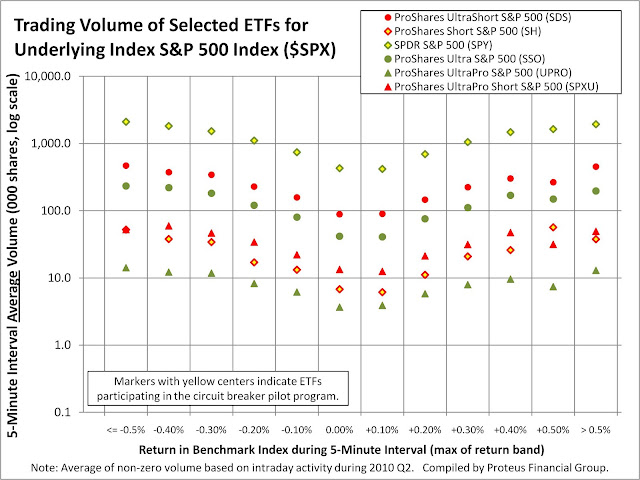 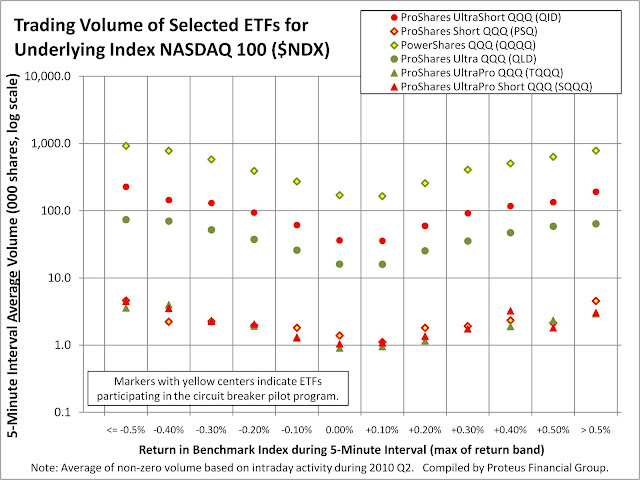 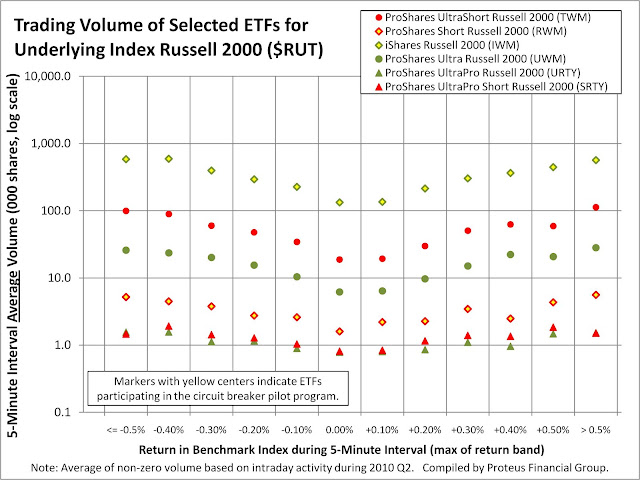 Once again, the double-leveraged ETFs consistently traded in greater volumes than their unleveraged short counterparts but less than their unleveraged long counterparts. Furthermore, these three graphs exhibit a very consistent "smile" shape, indicating that 5-minute interval volume does increase as 5-minute price movement (positive or negative) increases. While the overall shape is intuitive, the consistency among all ETFs (across different leverage ratios and long vs short) demonstrates the potential for a leveraged ETF to attract more volume should an unleveraged long or short ETF trigger a circuit breaker. However, these graphs do not and cannot prove how the observed leverage ratio of leveraged ETFs might behave during such a market scenario in the future.

In conclusion, the above analysis demonstrates some key aspects of leveraged ETFs which require careful consideration during normal and volatile periods of intraday trading.

2. As intraday price volatility of an underlying index increases, the corresponding volume also increases, confirming that ETFs are popular among traders who seek to rapidly gain market exposure or hedge existing positions. Both leveraged and unleveraged ETFs exhibit the same pattern of trading volume, which demonstrates that a leveraged ETF may be a viable proxy for an unleveraged ETF which has triggered its circuit breaker.

3. Both the NYSE and SEC appear to have postponed determining how leveraged ETFs may be included in the circuit breaker program. Most likely, the embedded leverage of such ETFs increases their chance of triggering a circuit breaker at times when other similar ETFs may trade inside their trigger levels. Such a potential scenario is further complicated by past behavior of observed leverage ratios, as shown above. (Currently, the SEC is not granting exemptive relief to ETFs which request to make significant investments in derivatives.)

4. The SEC is already concerned with the performance of leveraged ETFs, specifically due to their daily resets (which should not be pertinent to intraday leverage ratios). Might the exercise of identifying circuit breaker trigger levels create further scrutiny on a product where FINRA states "typically are not suitable for retail investors who plan to hold them for more than one trading session, particularly in volatile markets"?

Disclosure: No Positions
Follow Omer Uzun and get email alerts