In an effort to assess how asset allocation based on Modern Portfolio Theory can help an individual investor, the simplest set of assets - the three main market indices (DOW, SP500 and NASDAQ), a corporate bond fund (FBNDX), and a long term treasury fund (VUSTX) - was used to retrospectively construct a portfolio for each year during the period 2000-2011 on the basis of monthly returns of these assets from 1990 to the preceding year (e.g. , the MPT-based portfolio for 2005 was constructed by using the monthly returns for the period 1990-2004), and during the year the allocation was used to invest in (DIA, SPY, QQQ, FBNDX, and VUSTX). Our methodology differs slightly from the customary usage of MPT inasmuch as we base our optimization on the empirical data available at the time of the allocation, and, therefore, update the allocation every year, rather than construct a portfolio with fixed allocation on the basis of all the available data. Such a method is perhaps more rapidly responsive to changes in the statistical properties of the returns due to structural changes in the economy and the financial markets.

Due to the frequent rumblings about MPT, one would have expected our exercise to provide convincing evidence that MPT is somewhat less than useful for the individual investor. Extremely surprisingly, the performance of this portfolio turns out to be better than that of most of the mutual funds with 5 star rating from Morningstar.

The basic idea of MPT is very simple. It is a recipe for computing the weights of various assets in the portfolio such that the mean return for the portfolio is a specified value (the target return) while the risk of this portfolio, which the theory assumes to be the variance of the returns, is as small as possible. In other words, the method finds the weights of the various assets in the portfolio such that during the given historical period, while its mean periodic return is a specified value, a measure of the deviations of the historical periodic returns of the portfolio from the specified mean value is minimized.

The performance of the portfolio is shown in the table below. In each column are shown the returns for the given target return for which the portfolio was updated at the beginning of every year during the period 2000-2011. It should be noted that if the target return is the same every year, the minimized risk that the MPT yields may vary from year to year. So the main caveat of the­­­­­ analysis is that this minimized risk is acceptable. Otherwise, it may be necessary to change the target return from year to year in order to design the portfolio with acceptable risk.

The following plot depicts the growth of $1000 invested on 1/1/2000 and yearly rebalanced according to the MPT results for the target return of 10%. It is perhaps fortuitous, but there was not a single year of loss during this period. It's not really necessary to show the growth of a portfolio invested in SPY during this period as it is by now painfully well known to every investor. 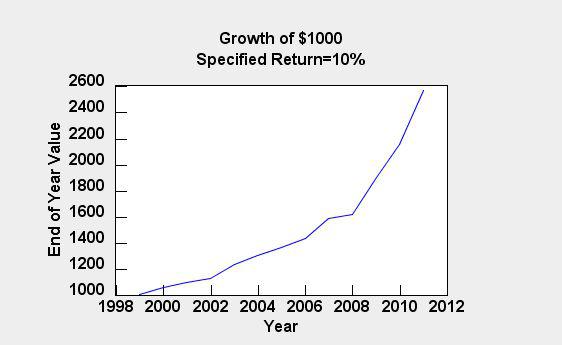 The allocation to the various indices and bonds for every year during the period is shown in the figure below. Note the ability of the method to alter the allocation to market indices during the times when the stocks did relatively better than bonds. It is also noteworthy that there was no year during which any allocation was made to SP500 (SPY). 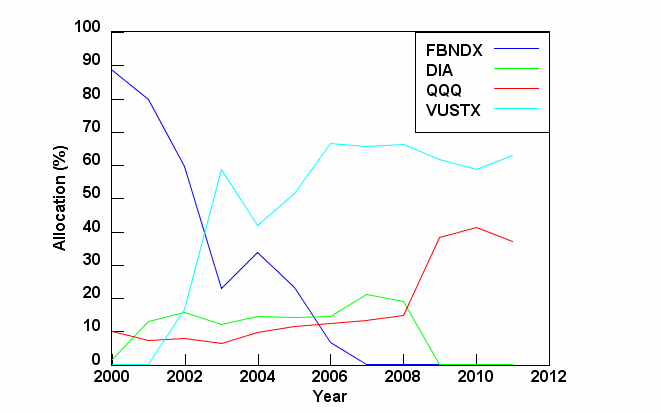 A search for Morningstar funds with 5 star rating and average or less than average risk whose 1, 3, 5, and 10 year returns exceed the corresponding returns of the portfolio with 10% target return yields no such funds among possibly hundreds of funds. The last five year returns of the much touted lazy portfolios also fail to improve upon this portfolio.

What the result means in practice is that during the last twelve years an investor would have probably been better off using MPT to yearly update a portfolio of only the major market indices (of course the ETFs corresponding to the indices would have to be traded) and two bond funds rather than investing in one of the bewildering arrays of mutual funds available in the market. That is quite astonishing.