In a 1963 lecture on the subject of Securities in an Insecure World, Benjamin Graham, the father of value investing and the guru of Warren Buffett, asserted that diversification between stocks and bonds was the true source of excess returns compared to the market. Specifically, he advised that the relative allocation to stocks and bonds should be between 25% and 75% one way or the other depending on the current state of the markets with respect to the value of the stocks. (http://business.financialpost.com/2013/04/26/benjamin-graham-revisited/ . See also, page 89 of the 2006 Edition of Graham's book, The Intelligent Investor)

The Naïve Graham strategy, which is the simplest one that can be derived from Graham's idea - one that the he probably would not approve, though it difficult to say so definitively as the investment vehicles such as ETFs did not exist at that time - leads to results that are noteworthy. Prior to describing the details of the strategy, we summarize the results for a number of cases. For the purposes of comparison with much simpler buy and hold alternatives, also shown are the results for a small cap value fund, DFSVX, and a balanced fund PRWCX, both of which have historically yielded superior performance compared to their respective peers.

Inasmuch as the risk-based performance metrics are substantially better than those of the alternatives considered here, the strategy has much to recommend itself.

The strategy entails rebalancing a basket of stock and bond ETFs at the beginning of every quarter on the basis of their relative returns during the immediately preceding quarter. The weights of the various ETFS are determined such that the total weights of each of the two classes of ETFs (stocks and bonds) are between 25% and 75% as advised by Graham.

The Method for Two Fund Baskets

This method applies to a basket of two funds, one a stock fund, and the other a bond fund.

The Method for Six Fund Baskets

This method applies to a basket of six funds, half of them being stock funds, and the rest bond funds.

The precise values of the weights are not very important: the only requirement is that the total for the top three ranked funds be 75% and it be 25% for the bottom three funds (even the totals of 75% and 25% weights may be replaced by slightly different weights for stocks and bonds). If the rank-based weights are in decreasing order, the allocation is determined purely by relative strength: the funds with higher returns in a quarter are assumed to likely perform better than the other lower ranked funds in the next quarter.

The following equity ETFs were used in the various baskets:

The ETF TLT and the mutual funds FLBIX and VUSTX, all based on long term treasuries, were used for the bond portion of the six fund baskets. In actual implementation, once the weights at the beginning of a quarter are determined, FLBIX and VUSTX may be replaced by TLT. (Alternatively one may just use three copies of TLT in the computations, but for the sake of simplicity we have used three distinct funds here.)

The main advantage of this strategy is that the allocation is determined without any complex computations, in sharp contrast to the other methods such as risk parity or the maximum diversified portfolio algorithm, and yet the returns are quite satisfactory. For the baskets considered here, the volatility of the returns and the maximum drawdown are also much lower than those of the stock funds alone. Just as the asset allocation methods that minimize volatility end up yielding portfolios which have superior returns over periods that span multiple market cycles, it appears that the portfolios whose allocation is based on returns alone may have low volatility.

As an example, the equity growth curve and the allocation diagram for the Guggenheim Growth basket are shown in the following figures. 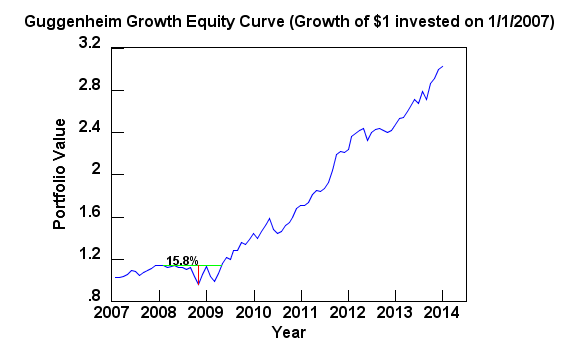 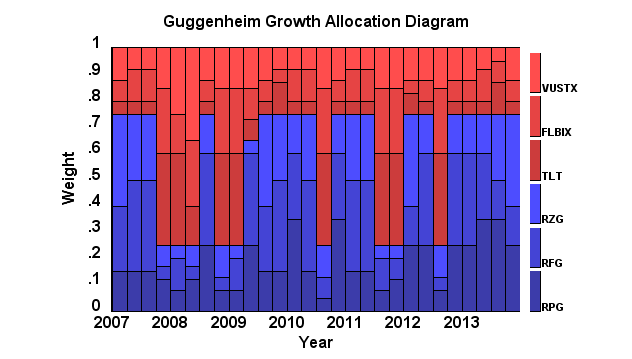 Disclosure: The author is long IJS.

Additional disclosure: This is not investment advice.