This is the set of five annual strategies that I will be following in 2016. Just to be clear, and this is intended to be more than the usual proforma disclaimer, I do not advise anyone to use any of these strategies, and in case one does decide to use any of the information here, it should be done with an abundance of caution, forethought, deliberation, and diligence, as investing is inherently never without risk, and almost every investment vehicle or strategy may lead to losses that are indeterminate in magnitude and timing prior to their occurrence. All of my results are based on historical data, and, of course, there is absolutely no guarantee that, in the future, either the historical patterns that have led to the superior performance in the past will be repeated or the historical performance itself will be replicated.

This is a slight modification of the strategy that I introduced at the beginning of 2015 ( https://seekingalpha.com/instablog/709762-varan/3652756-a-five-fund-basket-for-the-long-haul ), which returned 3% for the year - not quite satisfactory, but slightly better than SPY.

I have replaced the Select Consumer Staples Fund (FDFAX) by the Select Retailing Fund (FSRPX), and the Real State Fund (FRESX) by the Select Construction Fund (FSHOX), due to the better overall historical performance of the in-coming funds. The strategy entails rebalancing the basket at the beginning of every year by means of a modified version of the risk parity method that utilizes the variance matrix of the five funds based upon the daily returns of the prior year, as well as the total returns of the five funds during the prior year.

The back test performance of the strategy is compared in the figure above with the market indices. The figure depicts the compound annual growth rates of portfolios initially funded at the beginning of any year since 1988 and held to date. (The results prior to 2004 were computed by using VUSTX instead of TLT.)

The performance metrics for the period 1988-2015 are as follows:

For 2016, the portfolio consists of the following:

This is a momentum based strategy applied to the basket of 100 stocks in the NASDAQ 100 index ( http://dark-liquidity.com/Varan.php ). In 2015, the NASDAQ 12 returned 8.9%, and its hedged version returned 3.9%, both handily beating SPY. It is noteworthy that of the over forty lists of stocks selected by various financial entities and tracked here (

http://dark-liquidity.com/StockPicksSummary.php), these strategies were two of the only six which did not return a loss for 2015.

For the hedged version of the NASDAQ 12, 5.4% is allocated to each of the twelve stocks listed above, and the rest to TLT.

This (https://seekingalpha.com/instablog/709762-varan/2550271-an-annually-updated-portfolio-of-utility-stocks ) is a momentum based strategy coupled with allocation based on the maximum diversified portfolio (M.D.P.) algorithm ( http://papers.ssrn.com/sol3/papers.cfm?abstract_id=1895459 ) that seeks to maximize a measure of the diversification of the portfolio.

For 2016, the strategy yields the following portfolio:

This strategy (https://seekingalpha.com/instablog/709762-varan/4587756-winning-buffetts-bet ) is designed to minimize the volatility generally associated with leveraged funds while simultaneously retaining at least some of the performance enhancement due to leverage. The strategy entails annual risk-parity based rebalancing of QLD ( the leveraged version of the NASDAQ 100 fund) together with UBT, the leveraged version of long term treasury funds. I will be using this strategy for the first time in 2016.

Generally, for a basket of stocks which yields consistently good performance in terms of total return, periodically investing in the laggards may actually improve the returns or drawdowns or both. I started with the basket of following stocks (which was constructed while exploring the performance of individual stocks based counterparts of various portfolios containing Fidelity Select Sector Funds)

containing equities in conglomerates, REITs, utilities, retail, health, and technology. This basket would have yielded very good performance during the last ten years or more. However, just investing, at the beginning of every year, in the equally weighted portfolios of a few of these equities whose performance was the worst in the prior year would have led to generally better returns than investment in the whole basket. The following figure depicts the compound annual growth rate of the whole basket together with the growth rates of various contra-momentum portfolios initially funded at the beginning of any year since 2003 and held to date (with, for example, the Contra 5 portfolio being the portfolio of five yearly updated laggards ). 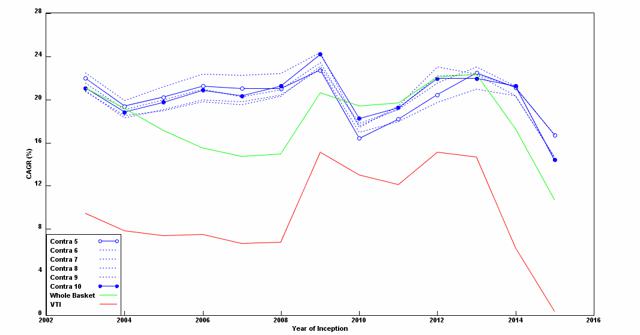 The performance metrics for various portfolios are given in the following table.

All the strategies that I have described here suffer from selection, survivor, and data-snooping biases to varying degrees, and so these biases also have to be adequately considered by anyone contemplating their implementation for personal portfolios.