Pure Growth Capital is a boutique financial & corporate communications firm singularly focused on assisting our clients in growing and protecting their shareholders. We focus on niche growth companies and the emerging markets.
Can sustainable aquaculture be the key in saving the blue fin tuna and keeping the fish a culinary treat worldwide?

A study released on April 19 by the International Union for Conservation of Nature (IUCN) offers a dire prediction: More than 40 species of marine fish currently found in the Mediterranean could disappear in the next few years. According to the report, commercial species, including the Bluefin Tuna, are considered threatened or near threatened with extinction at the regional level, mainly due to overfishing. 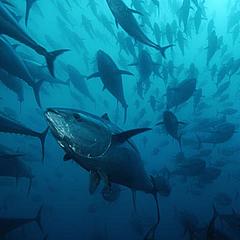 “The Mediterranean and Eastern Atlantic population of the Atlantic Bluefin Tuna (Thunnus thynnus) is of particular concern,” says Kent Carpenter, IUCN Global Marine Species Assessment Coordinator. “There has been an estimated 50% decline in this species’ reproduction potential over the past 40 years due to intensive overfishing. The lack of compliance with current quotas combined with widespread underreporting of the catch may have undermined conservation efforts for this species in the Mediterranean.”
This statement is baffling given the best available information on the issues of the Mediterranean and Eastern Atlantic Bluefin stock. The “widespread underreporting” and “lack of compliance with current quotas” must refer to incidents before the 2008-2010 reform of ICCAT, as no reports of illegal fishing have been filed since 2009, according to ICCAT’s illegal vessel list (http://www.iccat.int/en/IUU.asp), in spite of much strengthened policing of the waters and tighter control of the fishing. The study also contradicts the result of ICCAT’s scientific body, SCRS, which published a report (http://www.iccat.int/Documents/Meetings/Docs/2010_SCRS_eng.pdf) in autumn 2010, the most comprehensive assessment of the status of the stock ever made.
“With the exception of the Atlantic Bluefin over the past two years, the Atlantic Bluefin stocks did suffer from a lack of coordinated management over the last few decades,” notes Oli Steindorsson, Chief Executive Officer of Umami Sustainable Seafood. Mr. Steindorsson, a native of an Icelandic fishing village, is relying on his deep roots in the industry, and lessons learned from the overfishing and replenishment of the cod stock in his native country, to position Umami at the forefront of the fight for sustainable use of the world’s Bluefin stock.
As concerns over depleting the natural stock of Bluefin Tuna have increased in recent years, the International Commission for the Conservation of Atlantic Tunas (ICCAT) has reduced the total available catch for the Eastern Atlantic Bluefin Tuna (NBT) from 32,000 metric tons in 2006 to 13,500 tons in 2010 and 12,900 in 2011. A stock assessment conducted by SCRS in October 2010 calculated the Mediterranean stock of Atlantic Bluefin Tuna at approximately 175,000 metric tons, a significant improvement over a 2007 estimate of 78,000 metric tons, 57% of the historical highpoint of the stock in 1955-1957. Management measures put in place by ICCAT have outlawed illegal unreported catches and set the stock on a track to regain its former prominence. According to SCRS, the scientific body of ICCAT, the stock is expected to reach equilibrium in 2022, given the current quota of 12,900 metric tons.
Umami’s sustainability strategy is built around a set of objectives. For example, Umami strictly adheres to the catch levels scientifically required to permit the replenishment of Bluefin and other overfished species in particular regions. Also, the tuna that is caught by Umami is being farmed year round in cages at its facilities in Croatia and Mexico, a step that is helping to increase biomass and to decrease the need to overfish wild stocks. (Umami’s stock of Bluefin increased from 1,315 metric tons on June 30, 2009 to 1,719 metric tons one year later.) In addition, Umami is overseeing the spawning of its farmed fish and fertilized eggs and is already releasing fry back into the natural environment. 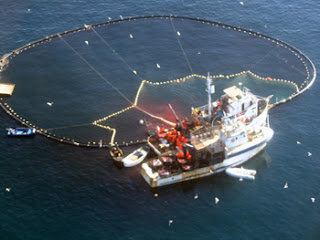 “We are very proud of the work we have done to date to build a sustainable aquaculture business around the Northern Bluefin Tuna species and we are excited about our future,” says Mr. Steindorsson. “Currently, we are the among very few companies in the world that is capable of farming Bluefin Tuna year-round. Our sites have been strategically chosen for that purpose, and we hold more than half of the known locations worldwide where tuna can be farmed year-round.
“There are no predators, such as sea otters, sea lions or sharks, in the Adriatic waters—where our Croatian facility is located—that might attack the fish in captivity. In the Pacific, where there are natural predators, we have built cages to keep the predators out of our Mexican facility. The waters where our farming sites are located are pristine, with no cases of red or blue tide caused by the damaging build-up of algae. There is no industrial production nearby either of our facilities, and in both places there is exceptionally clean water. The islands surrounding the farm sites offer natural shelter against most storms. In addition, the salt and oxygen levels and the water temperature offer a good combination of conditions for sustainable growth of the tuna.”
Bluefin farmed by Umami is fed only whole, small pelagic fish. No chemicals, drugs or additives are fed to the fish. Umami has managed to maintain a feed-conversion ratio of 13:1 at its Croatian facility and 17:1 at its Mexican facility, in contrast to the industry average of around 20 and the 25-30:1 ratio required in the wild. This means that the company is able to sustain its stock of tuna with considerably less feed than what even Mother Nature can manage.
Umami’s operations hold a larger number of sexually mature fish than can be found in captivity anywhere in the world, which in turn spawn in their cages, releasing fry into the wild. The company has put considerable resources into a propagation program, and commercially viable breeding of the northern Bluefin Tuna could become reality within a few years, eliminating the need for wild catch. Umami has a large brood stock population in Croatia, which has been proven to spawn in 2009 and 2010, and it has expanded its knowledge and capabilities in taking the fertilized eggs to the next stage. Umami is well placed to maximize its future production quantities with the use of specific technologies and propagation infrastructure and is focused on achieving the clear objective to close the life cycle of the species as soon as possible. A variety of factors will determine the time involved in achieving this goal. 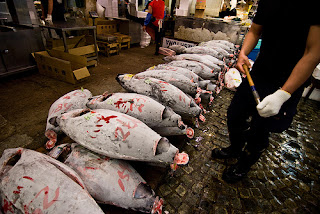 Umami has campaigned for lower quotas and stricter controls over the last five years, and its stance remains that all fishing should be subject to quota, based on a scientific assessment of maximum annual yield.
“Umami already has a proven record of financial success, and we are taking very good care of the environment along the way,” says Mr. Steindorsson. “Although Japan is our major customer, we are now expanding into the EU and US markets so that everyone can enjoy a piece of sustainably grown sashimi on their plate.” Umami’s sustainability practices represent a major step in keeping the prized Bluefin Tuna thriving—and on our tables as well.
Source: http://www.bymnews.com
Source: http://www.cnn.com
1 Comment
To ensure this doesn’t happen in the future, please enable Javascript and cookies in your browser.
Is this happening to you frequently? Please report it on our feedback forum.
If you have an ad-blocker enabled you may be blocked from proceeding. Please disable your ad-blocker and refresh.