Long term buyer and holder of silver. I still have silver from when it used to be the actual US money- when money had intrinsic value. Accumulating physical silver is always a wise investment.

Began investing and started charting on paper and calculating RSI and Stochastics on paper by hand.in the late 1980's (hey, an IBM XT computer cost $5000 back then).

On Gold: it's not that I am such a die-hard gold bug, it's more that I'm a big government and Federal Reserve pessimist and realist. The 10 cent candy bars I used to buy after school in 1961 when I was 10 now cost about $1.50. I have lived through the 90% decline of the Dollar. Thank's to the Federal Reserve. No accident: that's how they plan it.

I am always keeping an eye on what gold and silver are doing. I have mostly been out of the mining stocks since April and May. Yeah, I got caught in the big $140 drop in April and immediately sold a lot of miners and bought some DZZ. Still, it was not pretty or profitable. I was not fast enough to catch the bottom in gold on June 27.

Now there may be a second chance coming if one wants it. Gold went up almost $80 on Tuesday and Wednesday the 17th and 18th. It gave back $60 by Friday. On the chart of (GLD) below we see it has gone below its 50 day MA and may be heading back down to the lower Bollinger Band line (50 day, 2 dev). This would be around $123 or $124 for GLD (horizontal line) which would also be a 62% retracement of its recent move from June 27 to August 27. 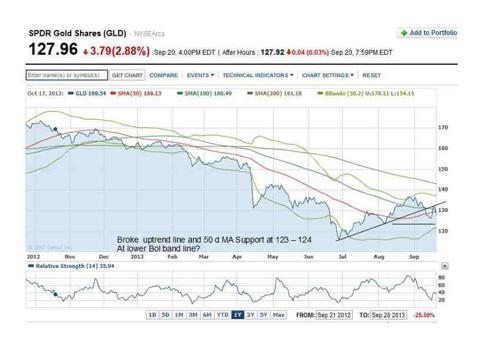 Relative strength is also lagging around 40 after having peaked and declined sharply. I would wait to see if $125 for GLD holds.

For those who speculate with NUGT and DUST, here is a chart of GDX. Short term it is negative. It is below the 50 day MA of $27.20 and now needs to find support. Yet, I would NOT short here using DUST. I would wait for support and then decide if I then want to go long. 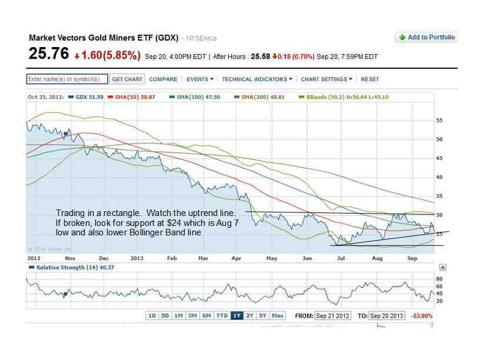 As I hold mREITS: (AGNC), (IVR), and (TWO) I pay close attention to the mREIT (REM) which is an Etf that holds the major mREITs like NLY and AGNC. I watch REM to track the mREITS, like I use GLD to watch gold. I tried to catch these mREITS after making tentative bottoms because of the big yields, which may shrink if they cut the dividend as AGNC just did. Even though AGNC cut its dividend from $1.05 to $0.80, and sold down by 57 cents Friday 9/20 it is still above its 50 day MA.

Here is a chart of REM. 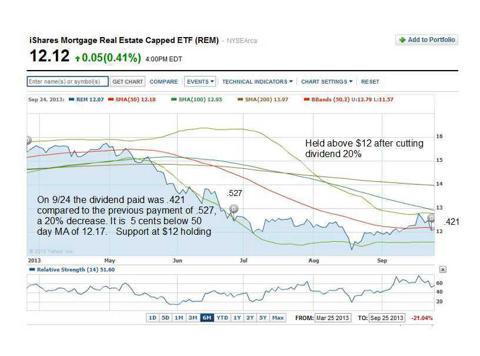 Relative strength is positive, just under 60.

REM reflects mREITS as a group. As a group they appear to have bottomed on August 19 and staged their first rally. They have held up in spite of dividend cuts. It is would be significant for REM to get back above th 50 day MA. If it fails, then it would revisit the lower Bollinger band area of $11.57.

It am holding mREITS AGNC, IVR and TWO as tentative short term positions, hoping they will strengthen and reward with a short term to intermediate recovery and also with 12% and higher yields. They may also turn into intermediate (or longer) holdings.

(AGNC) went ex-dividend today, 9/26. The opening price was reduced by 0.80 at the opening. Then it traded down another 0.34. It is still above its 50 day MA which is still positive. Yahoo shows the price declining by $1.14 today where Charles Schwab shows the correct $0.34 decline. The 0.80 will come back as a dividend payment. 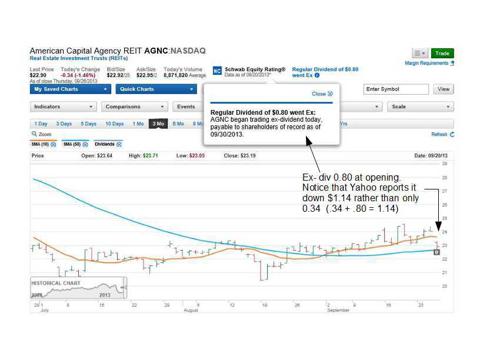 I am ready to sell if the market, interest rates or other factors turn against mREITs.

Finally, this chart is for IT who is a follower of (PSEC) 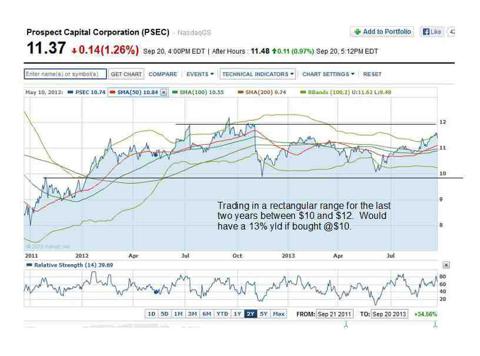 While on the topic of BDCs, here is a chart of (MAIN), one of the very best BDCs. As you can see it topped in March at $34. (chart says April, but it was March). Since then, it hasn't been able to hold above $31 and it has just weakened by falling below its 50 day MA. It peaked, made two Right shoulders under $31, and now is showing more signs of weakness even as the general stock market has made new highs. This does not bode well for BDCs in general as MAIN is one of the best. Maybe it will trade sideways, but if the general market weakens, it will go with the market. 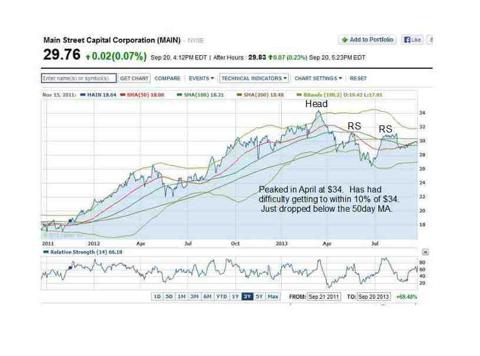 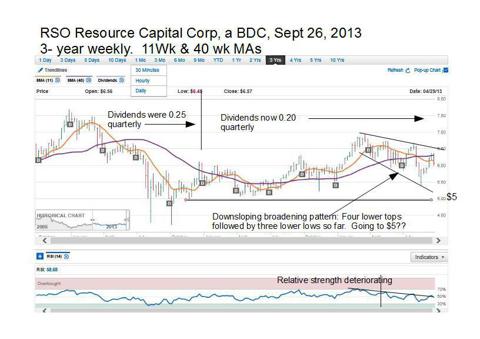 Relative strength is (see below the chart) is making lower highs.

Of the BDCs mentioned above, two of them (MAIN) and (RSO) are showing a negative picture. (PSEC) looks neutral, but MAIN and RSO may be indicating that BDCs are may be going lower.

That's all for now.

Best wishes and good investing to you