Publisher of options newsletter TerrysTips.com since 2001.. Thirty years experience trading options virtually every day. including stint as seat holder and market maker on the C.B.O.E. MBA from Harvard Business School and DBA from Univ. of Virginia Darden School. Author of Making 36%: Duffer's Guide to Breaking Par in the Market Every Year, In Good Years and Bad (4th revision - 2012) and Coffee Can Investing: A Better Idea Than Mutual Funds in an IRA or 401(K), 2014. TerrysTips.com is a newsletter that carries out eight different option portfolios which many subscribers mirror on their own or through auto-trade at several brokers who make all the same trades in individual customer accounts. Each portfolio offers something different (bullish, neutral, or bearish),and different underlyings (GOOG, SPY, SVXY, and other individual companies). In 2005, the S.E.C. brought an action against Dr. Terry Allen, claiming that he was managing money for people without being a registered investment advisor because of the auto-trade service offered by several brokers who placed trades in their customer accounts based on Terry’s Tips newsletter recommendations. A second complaint was for a single statement on his website that they believed was incorrect and therefore fraudulent. Although two large law firms assured Dr. Allen that if he went to court on the first issue, he would win because there was a Supreme Court decision stating that investment newsletters are exempt from registration requirements - it would be a violation of their First Amendment rights. However, they estimated that his legal expenses would be greater than settling with the S.E.C. (and a year or two of his time tied up in court proceedings), and both firms recommended that he accept the settlement offer while not admitting any guilt. The second issue (fraud) involved a single statement that was true when it was written but a couple of years later, option prices fell to 10-year lows, and it was no longer true. The S.E.C. argued that the statement was not removed from the website in a timely enough fashion. For the past eight years since the settlement with the S.E.C., Dr. Allen has have been publishing the Terry’s Tips newsletter (and recommendations are executed in customer accounts at thinkorswim by TD Ameritrade through their Auto-Trade program), and the S.E.C. has not objected to any of his activities.

This is the second article covering companies who report earnings during the week starting April 22, 2013. The first article - 3 Earnings-Related Plays For Next Week - included the companies which report before Wednesday, April 24th, and today the rest of the companies are covered.

For several months I have been studying ways to predict stock price action after an earnings announcement using four measures:

If expectations are unusually low, the reverse is true. The stock may well move higher even if the company fails to meet analyst projections.

Last week, these expectation measures suggested that SanDisk (SNDK) had extremely high expectations and would likely fall after the announcement, regardless of what the numbers were. The bearish option spread I recommended in How To Play The First Week Of The April Earnings Season ended up gaining 68% after commissions - see details.

As high as SNDK's expectations seemed to be, Google (GOOG) had equally low expectations. In one of our portfolios at Terry's Tips, with GOOG trading about $770, we bought May - April calendar spreads at the 780 and 790 strike prices, paying $4.60 and $4.75. In the morning after the announcement, we sold these spreads for $11.52 and $11.80, more than doubling our money. Once again, our measure of expectations correctly predicted the direction the stock price moved after the announcement.

Apple (AAPL) seems to have as low expectation levels as GOOG did a week ago. This would suggest the outright buy of AAPL in advance of Tuesday's after-hours announcement, or May - Apr4 calendar spreads at higher strikes than the $390.53 current price (e.g., at the 400 and/or 410 strike prices) where calendars can be bought for less than $4. These spreads could easily be worth double those amounts if the stock moves moderately higher next week after the announcement.

Here are the numbers for the remaining companies (trading over $20) with Weekly options that announce next week: 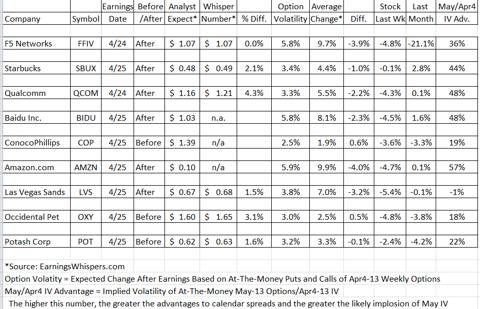 While you may use this information to support or refute ideas you may have about these companies, there does not seem to be a strong indication for any of these companies that expectations are particularly high or low. That is a real shame since I spent many hours calculating these figures.

Occidental Petroleum (OXY) and Qualcomm (QCOM) have whisper numbers which are higher than analyst expectations by the largest margins of any of the other reporting companies, but both companies have traded much lower over the past week and month, suggesting that expectations are not unusually high in spite of the elevated whisper numbers.

Of the nine companies reporting, Starbucks (SBUX) might be the one with the highest expectations (and might be most likely to trade lower after the announcement). Whisper numbers are slightly higher than analyst expectations, the stock has moved higher over the last month, and it fell only 0.1% last week while the S&P 500 fell by 2.1%. However, unless you have other reasons to believe that SBUX is due for some weakness, this level of expectations is not sufficiently strong to suggest a short sale, at least compared to the high levels we saw in SanDisk last week and low levels displayed in AAPL and GOOG.

One interesting note is that many companies, notably Baidu (BIDU), F5 Networks (FFIV), and Amazon (AMZN) have option prices which are quite low compared to the average historical change in the stock price after the announcement (according to EarningsWhispers.com). You could buy a straddle for the percentage of the stock price (Option Volatility column) and make a gain no matter which way the stock price moves just as long as the percentage change is the same as the historical average.

Another way of playing this would be to use the information that option prices for these companies seems to be lower than they should be to pick a direction if you like or dislike a particular company's prospects, and buy either a put or a call. For example, I think AMZN is having difficulties right now, and selling the stock short or the outright purchase of a put might be in order. Even with that inclination, I would be more comfortable buying a calendar spread at a lower strike price because I don't really feel that strongly about the stock moving lower at this particular earnings announcement.

I continue to believe that checking out the level of expectations prior to an earnings announcement is a great way to predict the direction the stock price might take after the announcement (regardless of how good or bad those numbers might be). In order to get a handle on the level of expectations, you have to go through the process of measuring the variables as I have done in the above table.

There is surely some value in concluding that there is not a clear edge to be had in either direction based on these calculations (as we have discovered in the above table), and as long as there is interest from Seeking Alpha readers, I will continue to make these calculations and pass them along to you.

Disclosure: I am long AAPL. I wrote this article myself, and it expresses my own opinions. I am not receiving compensation for it (other than from Seeking Alpha). I have no business relationship with any company whose stock is mentioned in this article.