My name is Koo Karimi from Riverside, CA. I am here to seek and learn from the astute and be engaged in active debate about investing in stocks, particular in stock options. Please leave professional and productive commentary when discussing various articles so we can have an effective discussion regarding various investments. It should be advised that any article material is my own opinions and ideas. Investors should conduct their own due diligence when investing in equities and various trading strategies. I am currently studying security analysis and portfolio management in preparation for the CFA. Thank you for visiting! Desmond Fargo Koo Karimi 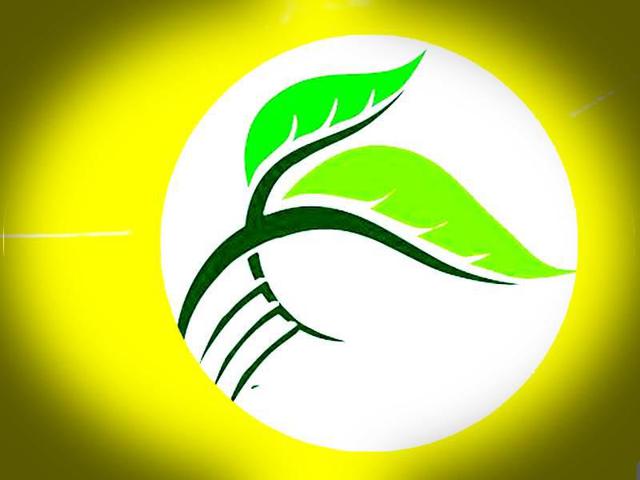 CEN Biotech reverberated the hearts of investors as they read the much needed press release(s) on September 24th, 2015 and November 12th 2015, discussing the company's spin off transition as well as the nutritional sector of the company. Thousands of investors tread closer to their dreams as their refusal to bend to pessimistic bashers' notoriously blatant lies were relinquished by the announced due date of CEN Biotech to spin off and become its stand-alone entity on November 30th 2015.

Spin-offs provide the investor a unique environment to examine the capital structure of the new company and be able to rely solely on itself for financing its capital investments. In other words, CEN Biotech no longer requires FITX (Creative Edge Nutrition) for any equity and can manage its own assets and funds, bringing intrinsic value to shareholders and investors alike. CEN Biotech will have little debt, if any, to not only manage this new capital structure, but to also engage in various equity deals and focus its efforts to leverage the company in diversification and company stability. 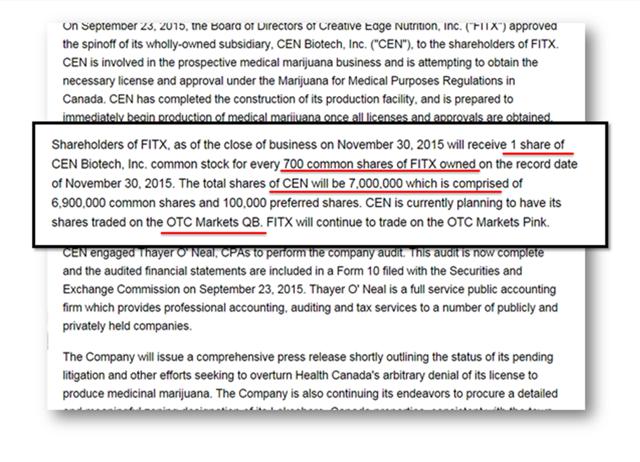 Investors should note the distribution ratio of the spin off; for every 700 shares of FITX currently worth $0.0056, one share of CEN Biotech will be retained. In other words, a shareholder can pay roughly $4 for one CEN Biotech share (700 shares X .0056). This is grossly undervalued for the venture and future prospects of the company.

It would also be prudent for investors to watch closely the launch of GiddyUp sports energy drinks, spearheaded by James Robinson, CEO of FITX. A press release issued on November 12th 2015 , asserts the seasoned sports drink guru CEO to have finalized a deal with Dr. Pepper/Snapple Group in the production, launch, and commercialization of the energy drink successfully.

Historically, spinoffs have outperformed the market by as much as 18-30%, with the spinoff company beating the market average by as much as 45% during the first two years of the initial spinoff. "Stock valuations for both parent and spinoff companies often rise due to the investor's "preference for focused and pure play companies." Furthermore, the current market conditions have traditionally indicated spin off ventures to outperform in strong bullish markets. (Chip Dickson Investigation)

Many bullish and bearish investors agree that the current market capitalization of CEN Biotech remains to be seen. Unfortunately, the market has inadequate analysis of CEN Biotech-largely due to a lack of sufficient detail to fundamentally evaluate and interpret the company's performance. Moneymakers are causing somewhat of a "lobster trap" in the market, costing investors millions in price per share daily for relatively no reason. Below are important highlights that can significantly affect the price per share in correlation with the intrinsic value of CEN Biotech. Though it is difficult in quantifying a fair valuation in pps, many thousands of investors agree that CEN Biotech will be worth at the minimum $25-35. Many other intrinsic prospects can only add value to the pps, particularly Hemp Technologies and global market distribution plans of the company.

In addition, much speculation has given many credible investors the notion that a merger with a relatively large pharmaceutical company, RXNB, coupled with the prospects of Hemp Inc, has put CEN Biotech at a market cap value of near $250 million dollars. Furthermore, the share quantity of CEN Biotech places it well under the average in the marijuana industry (20 million), giving investors a unique opportunity to catapult with the stock price almost instantly.

Form 10 filing crucial to spin off.

Just to illustrate the complexity of spin off undertakings and the cost and preparation of such a feat, the book "Spin Off Guide", by Wachtell, Lipton, Rosen & Katz, explains:

Before disclosing an intended spin-off, companies should complete enough preliminary work to be confident that, once the anticipated spin-off has been announced, it could be completed; therefore, the company should have a general understanding of the expected costs of implementing the transaction and the likely time frame and confirm that there are no "show-stoppers" that would prevent completion of the transaction. In the case of a spin-off of a subsidiary that has been operated as a standalone business, this may be a relatively simple process because the business to be spun off will have already been reasonably well defined."

CEN Biotech's Form 10 filling can be downloaded off the SEC website. It is fairly reasonable to assume that a merger acquisition with RXNB (Creams n Caps) would subsequently satisfy these stringent requirements and also allow CEN Biotech to concurrently focus on their global pharmacy distribution as well as their medical marijuana endeavors. Of note, ongoing business relationships such as the Lakeshore fiasco, Health Canada judicial review of licensure, NAFTA claim violations by the government of Canada, and delicate share restructuring will propel the stock price to record breaking levels relatively quickly.

To give a sense of spinoff fees, investors should check the listing fees, detailing various fees such as initial listing fee cost ( average $150k), annual costs ($250k), number of shares outstanding ranging from 40 million to 550+ million, transaction costs, arbitrage merging costs (well over $1 million dollars). This can quickly cascade a massive toll for the company. Investors have robustly discussed that roughly $1.4 million dollars has been utilized by the company to successfully spin off CEN Biotech from FITX. This is serious, and an exciting monumental moment for investors and the company to witness on November 30th 2015.

The spinoff strategy in lieu of a reverse stock split allows for a share restructuring that yields a much smaller market share quantity (reduced almost 420%), an increase in the value of CEN Biotech shares, and most importantly, the transition of CEN Biotech to a major exchange, leaving the "penny stock stigma" finally behind them. This will also attract new investors that have ignored the OTC market, and institutional investors, who were not generally allowed to trade penny stocks due to the manipulative uncertainties of that exchange. This is truly an accomplishment very few, if any marijuana companies have yet to attain.

Of note, smart and business oriented CEOs invest their time and money in ventures that yield a much favorable outcome. Many investors should realize that Bill Chaaban has waived selflessly two years of salary with CEN Biotech and canceled the contract with FITX that would otherwise have put the new spin off company in debt. Bill Chaaban, a lawyer by profession realizes that CEN Biotech will require sacrifice, tenacity, and an incredible vision to see the bigger picture that many opponents and naysayers lack. 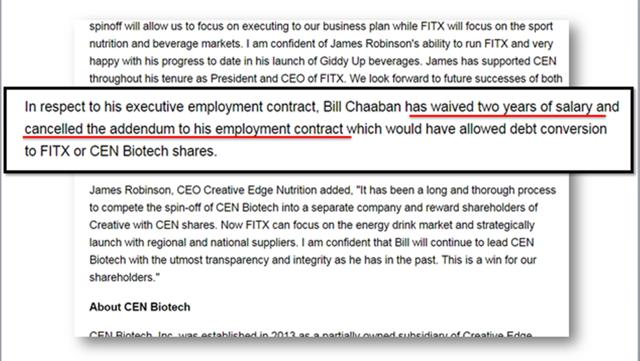 Audited financials are an integral component of a successful company and a well-known barometer that gives investors a great deal of confidence in a company's business plan and assets. Audited financials, which have not been utilized by any marijuana company to date, embeds honesty and legitimacy to a company's financial statements, enabling the company to be scrutinized meticulously by professional equity analysis firms such as Morgan Stanley, Wells Fargo, and Merrill Lynch. This is the time in which CEN Biotech will uniquely separate itself from other marijuana companies that contain convoluted financials tarnished with corruption and stock manipulation controlled by the media and third party opponents. 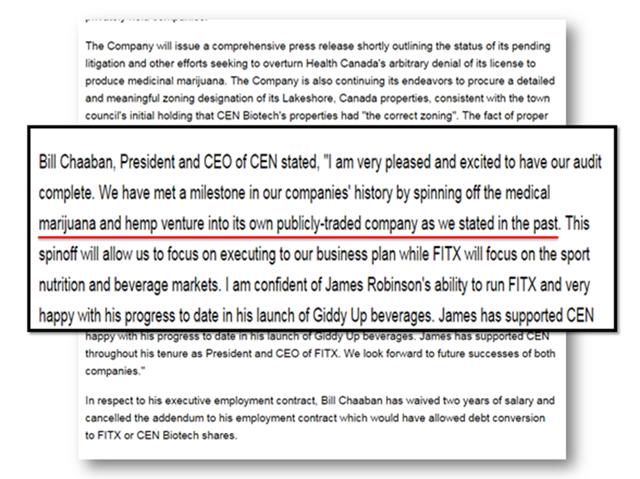 Much of the updates below have been critically analyzed by investors and are salient to the success of the company. CEN Biotech has a team of lawyers, doctors, financial gurus and SEC/IRS board of directors that have scrutinized the company's prospects. The company and investors agree that the rule of the law is in their favor, and will vindicate the company from the gross corruption and misrepresentation tarnishing the company. 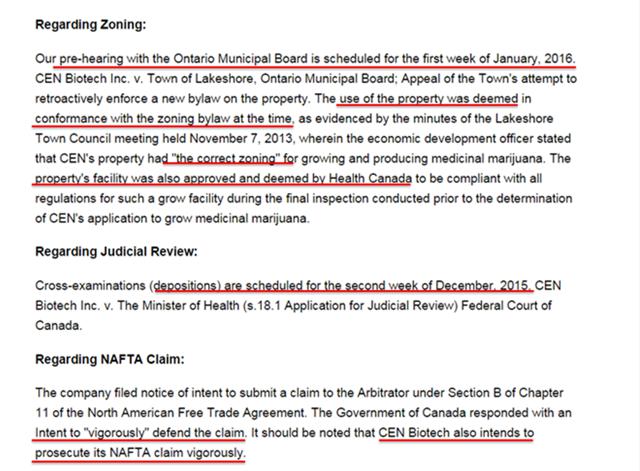 It has been more than two years since the inception of the marijuana company. The truth of the matter is, CEN Biotech is fundamentally poised to be the leader in the industry and there are many compounding factors that have given investors insight into its success. Bashers and opponents brushed off the spin off as a blatant lie, a misrepresentation, and false propaganda. The spinoff is a testament to the thousands of investors who have patiently protected their investment ideas and gave hope to the honest average investor and bystander in the gross misrepresentation of CEN Biotech by various media outlets. The due diligence of each investor has been unprecedented, and it should not go unnoticed. Investing in CEN Biotech should be taken seriously, and at this time, one of the few marijuana companies that have left opponents envious in shock and awe. More to come in this great journey ahead!