Larry Kummer has 37 years experience in the finance industry in a variety of roles. From 1994 to 2013 he was at UBS, the last 15 years as a senior portfolio manager and Vice President of Investments. Now retired, he had most of the major licenses at FINA, plus those for commodities and insurance.  His articles are widely reposted. Those about economics & finance appear at Roubini’s Economonitor, Investing.com, OilPrice.com, Wolf Street, and (of course) Seeking Alpha. Those about climate change appear at websites such as Climate Etc (of eminent climate scientist Judith Curry). Those about geopolitics have been posted at Martin van Creveld’s website and elsewhere. See his articles about the 2007-08 crash here: http://fabiusmaximus.com/financial-crisis/ Seeing the real estate crash coming, he began writing in Nov 2007. He called the recession in early 2008 (a controversial call then). Like everybody else, he didn't anticipate the depth of the crash in late 2008 -- although accurately reporting as it happened.

Summary: The economy is slowing. We are probably not in a recession, let alone beginning the End Times depression doomsters have so often predicted. On the other hand, continued slowing seems likely, and a little more and we will have a recession. Let's look at some key indicators.

(1) Manufacturing; one piston of the US economy's engine

December's Advance Report on Durable Goods shows a continued slow decline, especially new orders. The monthly decline in December was large, but not unusually so for this volatile data. It doesn't scream "recession".

Nor does the year-over-year decline of 1.7% SA scream "recession. It is not even unusual. New orders often decrease without a recession following; it has happened several times during this expansion. The data only goes back to 1993. 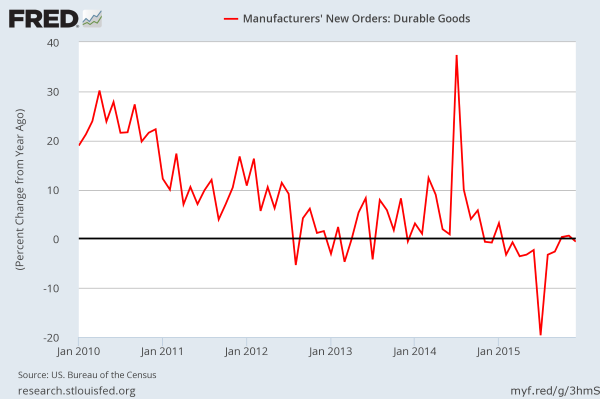 The most reliable indicator for the US is DoT's Transportation Services Index for freight volume. As you can see, it's been slowing YoY SA through November. It is a volatile index (clickbait fodder), and has been negative often before. Data goes back to 2000. 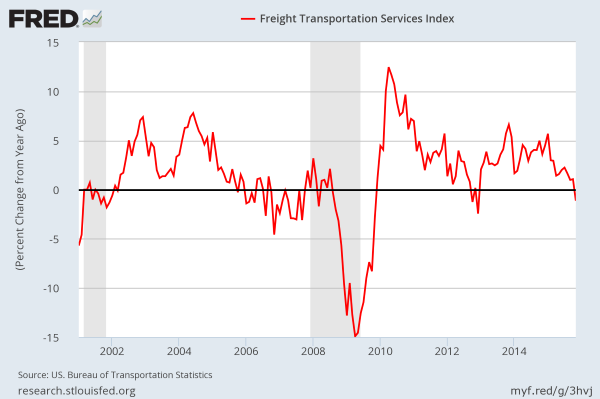 One of the best indicators of trade activity is the World Trade Monitor by the CPB Netherlands Bureau for Economic Policy Analysis. As you can see, nothing is happening. The numbers are volatile month to month, but show steady slow growth during the past two years. 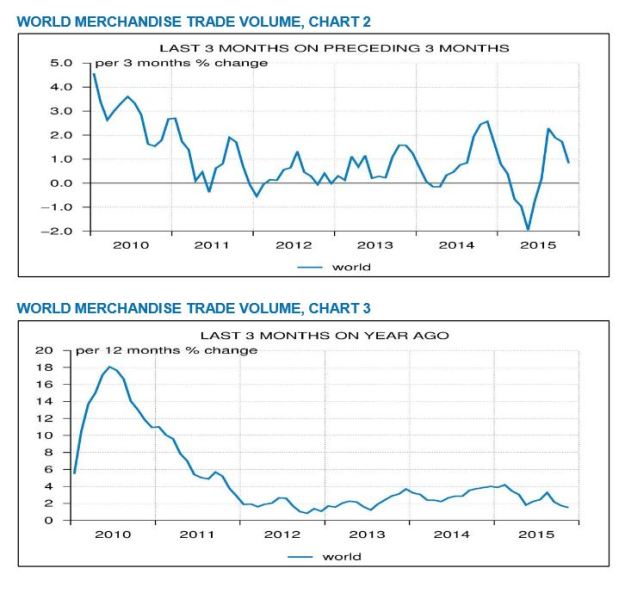 The US economy (updated today)

The US economy is slowing, but slowly. There are so many indicators. I suggest watching the Atlanta Fed's GDPnow model's forecast. It does no better than carbon-based economists, but is easy and fast to consult.

Since the crash the economy has grown slowly -- with two brushes with recession, both prevented by government stimulus. Fiscal and monetary stimulus in Q4 of 2010; QE4 in Q4 of 2012. Now the economy is slowing again. I suspect we will have, at best, another brush with a recession. 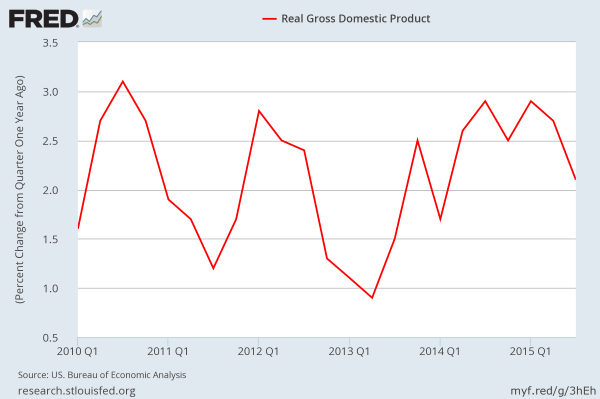 We do not have anything similar for the world economy. The most reliable current indicator in my opinion is the OECD's Composite Leading Indicator (CLI). Their January report with November data shows continued stable slow growth. 100 is the long-term average of economic activity; the arrowheads mark inflection points.

What about China? The CLI for China is 98.4, flattish for the past five months. Neither its stock market or economy is burning. The Shanghai Stock Exchange Composite Index is down 13% YoY and down a quarter from the December high, but stocks have little role in China's economy. 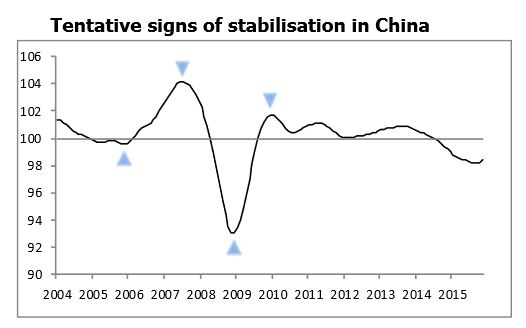 The US economy is slowing, but slowly. The world economy is stable. But many forms of economic, social, and geopolitical stress are increasing. Some, like the pricing prices of oil, natural gas, and oil -- and the US presidential election -- have few or no clear precedents.

This could become an exciting year. Stay alert and nimble.

See these articles at Seeking Alpha about the US economy...