Larry Kummer has 37 years experience in the finance industry in a variety of roles. From 1994 to 2013 he was at UBS, the last 15 years as a senior portfolio manager and Vice President of Investments. Now retired, he had most of the major licenses at FINA, plus those for commodities and insurance.  His articles are widely reposted. Those about economics & finance appear at Roubini’s Economonitor, Investing.com, OilPrice.com, Wolf Street, and (of course) Seeking Alpha. Those about climate change appear at websites such as Climate Etc (of eminent climate scientist Judith Curry). Those about geopolitics have been posted at Martin van Creveld’s website and elsewhere. See his articles about the 2007-08 crash here: http://fabiusmaximus.com/financial-crisis/ Seeing the real estate crash coming, he began writing in Nov 2007. He called the recession in early 2008 (a controversial call then). Like everybody else, he didn't anticipate the depth of the crash in late 2008 -- although accurately reporting as it happened.

Summary: The great struggle to manage or even control oil prices again dominates the world economy and the news headlines. Yet even the basics are poorly understood, cloaked in myths and misunderstandings. Here is a quick sketch of how the oil boom brought us here, how the bust will end, who will win, and what comes next.

On 4 March 1999 The Economist predicted $5 oil. That was the bottom. experts often just project more of the same.

What's happening with the oil markets today? Oil has gone from $150 to $30, and some experts say it will drop to $15. Just as in the previous cycle it crashed to $10 (the low) and experts predicted it would go to $5.

Both cycles ended, as commodity cycles usually do, with massive excess production. Now oil "producers" (i.e., miners) and their creditors must decide how to reduce output and raise prices so that most of them are profitable.

Note: the term used here is "oil", but the numbers shown are for liquid fuels: crude oil (which includes that from oil sands and lease condensate), petroleum broadly defined (natural gas plant liquids and shale oil), and other liquids (from coal, gas, and plants). Over time different liquid fuels gain competitive advantage; we need not fetishize crude oil.

The daily balance produced by prices

Oil is expensive to store commercially. This forces production into an almost daily balance with consumption. There is no long or large surplus of output over production.

The increased crude production during the past few years was small: 1.7% per year for the five years ending Oct 2015 (a total of 7.8 million barrels/day). Slow growth plus increased efficiency meant slow demand growth - three-quarters of which came from America (5.9 million b/d) and the rest came from Iraq (1.9 million b/d) - both of which could continue boosting production.

Then came the end of sanctions on Iran, allowing a flood from its massive oil reserves. A collision was inevitable. When ex ante oil demand (i.e., before price feedbacks) exceeds production - as it did in 2008 - we get "demand destruction" - rationing by price. Rising oil prices motivate people to reduce discretionary consumption, invest in methods and tools to increase efficiency of use, and adopt substitutes. If those prove insufficient or too slow, the economy slows enough to balance demand and supply.

The process works just as inevitably in reverse when ex ante production exceeds demand - a "rationing" of the market among producers. Either they voluntarily reduce output as prices fall, or falling prices push them to do so through bankruptcy (i.e., the weak fail). The process is painful without collective action, which is why cartels are born.

Production in the North Sea illustrates these dynamics. Capex has been slashed and " 43% of oilfields are likely to operate at a loss this year if the price does not recover."

People often cheer the falling oil prices as a stimulus to the world economy. It's an illusion, like belief that breaking windows stimulates the economy. It does for some (e.g., window repairmen, oil consumers). But it is neutral for the world economy, especially when the bankruptcies begin.

In the early 1970s the OPEC cartel took over management of the world oil market, formerly done by the Texas Railroad Commission. Cartels accept the role as swing producers to keep prices stable and higher than they would otherwise be; non-members can free-ride by not sharing in production cuts during slow demand growth or rapid capacity gains. Price wars restore the balance in the game.

We saw this in the early 1980's as the Soviet Union expanded production. The Saudi Princes made way, cutting their output to accommodate it - until 1986. Then they increased production, employing their lower cost of production to push the Russians out of the market. The resulting loss revenue contributed to the USSR's fall.

From Politifact, 13 March 2014 (always good at debunking the Right).

Now history repeats itself, this time with the US taking market share - and depressing prices. The Saudi's have some of the lowest-cost oil plus stronger balance sheets than most producers. They are well-positioned to wage a price war - and be the "last man standing." Before this is over, bankruptcies will have oil producers standing in line to join OPEC (some covertly, with quiet cooperation). If it continues long enough, perhaps Alaska and Texas will join (that's gallows humor). 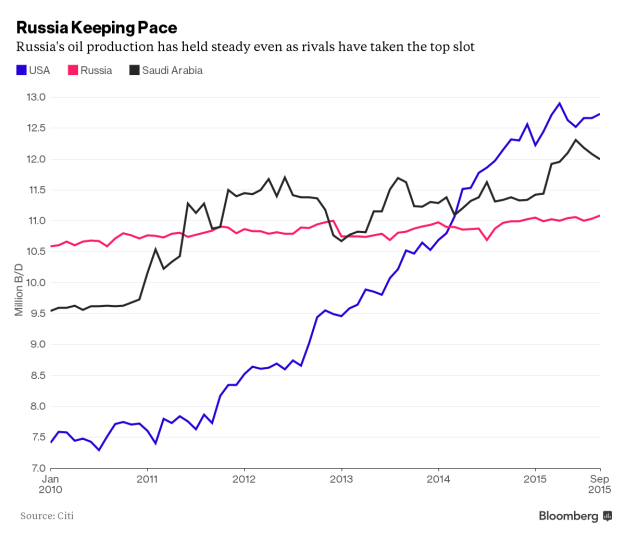 The Saudi Princes have one other factor that makes them the likely winner: they cannot afford to fail. With a rising population of royals and commoners to support plus wars in Syria and Yemen, the breakeven estimate of $97.50 is probably too low. For the Saudi Princes, "whatever it takes" to boost prices is probably their game plan.

They have massive investments, but they are melting like last winter's snow at $30 oil. As are all the rich oil producers. For many of those who lack large cash hoards but depend on oil profits - such as most US E&P companies - bankruptcy is the inevitable outcome if this price war continues. 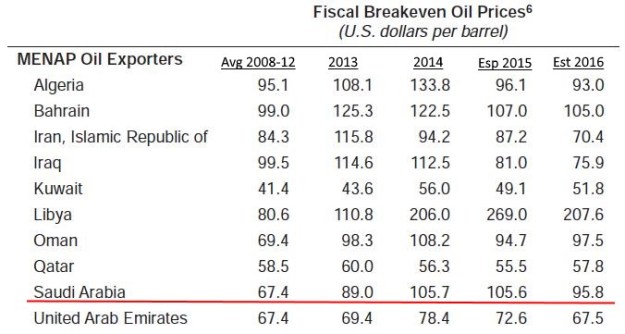 As always, these are point estimates of dynamic numbers. The assumption is ceteris paribus (other factors remain the same), which they will not (e.g., their currencies will weaken, helping in some ways and causing different problems - a mix different for each nation). But $60 oil is bad news for most oil producers; $40 is a disaster.

Prices will eventually recover as production declines, whether by negotiation, bankruptcy, or after years of falling capex. Oil prices must rise so that sufficient oil gets pumped to meet world demand. That price is certainly over $60, depending on the unknowns of global GDP growth and technological innovation. The price rise might be fast, if a revitalized OPEC (perhaps with quiet partners in other nations) cut production.

A quick cut of two million barrels/day (~2% of production) would boost prices. The resulting spare capacity of four or five million barrels/day would provide valuable insurance for the world in these uncertain times (its calculation explained here). See this EIA graph…

Oil prices will rise again. When prices rise again, exploration & production will increase - but at higher price points than during the past boom. Probably much higher oil prices will be needed to restart the capex needed to maintain current levels of oil production, let alone provide for future economic growth.

Company CFO's will write checks only for projects that will produce profits at the prices at that time - and only with conservative assumptions (no more "field of dreams" capex). How far is that? It's a complex calculation. There are project operating costs, capital costs (capex to develop the field), overhead (got to run the company), and the cost of capital (money is not free). Different sources have different mixes, so there are no easy comparisons between them. The "cost" numbers quoted in the media are usually a useless mix of numbers.

Lenders to the oil industry will will play a role in setting prices. They will demand higher interest rates than during the past cycle, as the memories of the coming defaults will linger for years. The coal bankruptcies, now starting to become serious, will further entrench the reputation of energy lending as high-risk - deserving large credit spreads.

What about fracking? Companies relying on fracking produced little free cash flow even with natural gas (Henry Hub) at $3.50 - $4.00 and oil (WTI) at $90 - $100 - as they were for most of 2013 - 2014. And that was with an absurdly low cost of capital provided by lenders (too low, as will be proven by the bankruptcies that are just starting). Fracking production falls off quickly; the capex flow won't restart until oil and natural gas prices rise a lot from here.

Boom-bust cycles are an inherent part of the commodity business. With oil, the most important industrial material, they shake the world more than most. These create hard times for the people dependent on oil. To create some order in their lives they often create cartels - which oil consumers consider illegitimate (much as employers often consider unions illegitimate).

As we get closer to peak oil - increasing production by tapping ever-lower quality reserves - and new sources - aided by new technology. This probably means a shift of their cost structures from operating to capital costs, which will increase the size and violence of these cycles. Profits in the booms followed by bankruptcies of households and corporations.

Managing these cycles might become desirable, rather than leave them entirely to the free market. If so it will become as obviously desirable in hindsight as it seems impossible today.

For a deep look at these issues see Exxon's new report "The Outlook for Energy: A View to 2040". Also see the EIA's "What drives crude oil prices?"

Hee are other posts about oil:

See my articles at Seeking Alpha with trading advice…

And these about the US economy…

To learn about the minerals that power our world, and will for many years more, I recommend reading the IEA report Resources to Reserves 2013. Here is a brief slidedeck of its contents. For a deeper look, see the IIASA's Global Energy Assessment (a widely cited source document, including by the IPCC's AR5). Here is a 113 page summary.