Dara Albright is a recognized authority, thought provoker and frequent speaker on topics relating to fintech, digital-, peer- & crowd- finance. Albright has held a distinguished 25 year career in IPO execution, investment banking, corporate communications, financial marketing as well as institutional and retail sales. Albright was one of the earliest voices covering the JOBS Act and advocating for greater democracy in the equity and credit markets. In 2013, she co-founded LendIt, the largest and most recognized global p2p & online lending conference organization. In 2015, she co-founded FinFair, the first conference platform to feature the leadership, products and technologies driving the crowd-centric retail alternatives market. In 2016, she founded FinTechREVOLUTION.tv, a groundbreaking online financial channel for the masses that highlights how technology is being employed to make personal finance and retirement planning interesting, entertaining, simple and interactive. Prior firms she worked for include: Unterberg Towbin, Morgan Stanley Dean Witter, Divine Capital and Citigate Dewe Rogerson. She is a graduate of the George Washington University and has held securities industry Series 7, 24, 31 and 63 licenses. Her body of work can be found at DaraAlbrightMedia.com.

It took Europe's economic collapse coupled with the rampant political manipulation of the U.S. monetary system for me to realize that everything I was ever taught about socio-economic theory had been dead wrong.

I feel shortchanged by my professors, economic journalists and yes, even, Hollywood who perpetually instill this false notion that money and greed are the root of all evil. Although both may lead to unscrupulous actions, capital and our desire to obtain it, have done more to progress the human race than any other motivator in the history of time.

Greed and money enable philanthropy. Both foster the innovation that leads to job creation and upward mobility. When did it suddenly become less admirable to donate to charity than to pay higher taxes? Is it really immoral to desire a better, more financially stable, existence for our children? Is it that vile to strive to afford quality healthcare or more expensive organic food free of GMOs (genetically modified organisms)? If you ask me, money is only sinful when it when it corrupts the democratic process by paying off elected officials and unwitting voters.

Portraying wealth and greed as evil may score political points and even win academy awards, but it certainly doesn't resolve our nation's fiscal crisis. Even worse, failing to acknowledge the actual problem only exacerbates the economic turmoil. For the sake of future prosperity, let's reveal the true culprits behind the economic and moral decline of America, shall we? I think money and greed have served as scapegoats for the real villains - power and gluttony - long enough.

Instead of a government for the people and by the people, as originally intended, America is being held captive by insatiable financial monopolies that feed narcissistic politicians who feign support for the lower and middle class by tossing them a few entitlement bones. Instead of legislatively rigging the markets to favor financial monopolies and bribing its citizens with handouts, the government should be encouraging free markets and eliminating the regulations that suppress lower socio-economic classes from aspiring.

Our bloated government needs to stop controlling the populace and start serving its people. It can begin by providing its poorer citizens the very same investment freedoms that it grants its wealthier ones. The government should never have assumed the authority to dictate how its constituents spend their salaries. And yet, it has. The U.S. government continues to forbid citizens with lesser incomes and a smaller net worth from investing in the same high growth opportunities it allows its citizens who make more than $200K per year and have a net worth of at least $1M (excluding the value of one's home).

Over the last 80 years, the government has been gradually confiscating many of our investing freedoms. It now restricts the majority of its people from investing in alternative assets where the potential financial returns greatly outweigh those of conventional asset classes. Why would a democratic government legislatively favor one class of citizens over another? Power, of course!

The government would defend its actions by claiming it is trying to "protect" its "less financially sophisticated" citizens from fraud. But this argument doesn't hold muster considering the greatest instances of fraud have been perpetrated, not by under-regulated alternative asset classes, but rather by public assets containing the most regulatory oversight. Does Enron and Worldcom ring any bells?

The truth is repairing our financial markets requires effort and education. The restoration also entails pissing off the fatcats who most benefit from the status quo. Simply stated, it's just easier as well as politically advantageous for members of the government to simply blame Wall Street greed (while secretly condoning it). Furthermore, keeping the public misinformed gives government another opportunity to introduce regulatory restrictions and illicit even more power.

I say, "Enough is enough!" It is time for our government and our financial markets (as if they are even two distinct entities) to be handed back to its rightful owner, we the people. While some may fret that it is too late and that the damage has already been done, I would argue that its resolute citizens will salvage America - like they consistently had done throughout the last 237 years.

Through social technologies and fairer securities legislation, we Americans have an exceptional opportunity to repair OUR economy and retrieve OUR financial markets by employing the doctrines of "crowdfinance".

"Crowdfinance" is a more democratic financial system that allows individuals, as opposed to large financial institutions and government entities, to fund and profit from the ingenuity and innovation of their fellow citizens. This practice is not only more efficient, it is essential to ensuring prosperity for all Americans - not just a privileged few.

In today's financial climate where interest rates are at all-time lows and companies can't go public until after critical growth peaks have long passed, "crowdfinancing" is vital in order to accommodate a yield oppressed public and America's cash-starved small businesses. And the beauty of this approach is that unlike venture capitalists who take controlling interests or high frequency traders who require quick exits, crowdfinanciers are long-term minority investors - a successful strategy that has consistently led to both stronger businesses and better investment returns.

Crowdfinance is principled in a new economic theory I am proposing called the Doofenshmirtz Economic Theory that allows all socio-economic classes equal opportunities to own small pieces of growing businesses. It is named after Doctor Heinz Doofenshmirtz, the antagonist from the children's cartoon, "Phineas and Ferb" - only the most imaginative cartoon in the history of cartoons. Doofenshmirtz has one ambition in life - to "take over the tri-state area". Mind you, that similar to Crowdfinanciers, Doofenshmirtz doesn't endeavor to own all of the world's riches or rule the entire planet. He is perfectly content reigning over an infinitesimal subset of the earth - the tri-state area.

The tri-state area symbolizes optimal quantities of money and greed - ample amounts to incentivize, yet not enough to corrupt. If only financial conglomerates and self-serving politicians would be willing to forego all of the power and gluttony and just settle for the tri-state area. If only.

Ironically, before it was tarnished by power and gluttony, the Doofenshmirtz economic theory was actually referred to as capitalism. And it was capitalism that enabled America to transform from a vast farmland into the greatest economic superpower the earth had ever encountered. Hopefully the crowd will wake up and finally reclaim what is rightfully theirs - before a great democracy becomes the land of mediocracy. 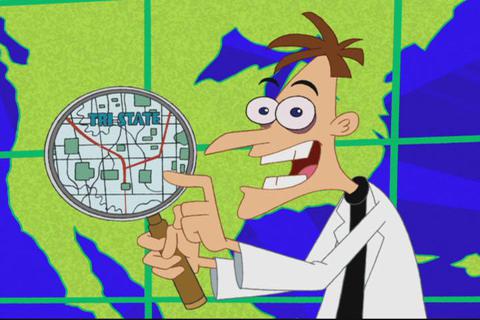