Robert Balan has 5 decades of experience in the financial markets. Education in Mining Engineering, Computer Science & Engineering, M.S in Quantitative Finance, and training in Economics led to a commodity analysis career during the commodity boom of the early 1970s. Robert made a switch to global macro focus in the early 1980 when the commodity bull market waned, with specialization in foreign exchange. Robert wrote a very high profile daily FX analysis while Geneva-based (Lloyds Bank Int'l) in the mid-1980s (the first FX commentary with a real global readership, "most accessed" in the Reuters and Telerate networks from 1988 to 1994).

He worked for Swiss Bank Corp and Union Bank of Switzerland (precursors of today's new UBS) as head of technical research in various finance centers (London, New York, and subsequently, head of prop trading at SBC in Toronto ) from the late 1980s to mid-1990s. A stint at Bank of America as head of global technical research followed in late 1990s to the early 2000s.

Robert wrote a book on the Elliott Wave Principle in 1988, which has been hailed by the London Society of Technical Analysts as best ever book written on the subject. Robert is a member of the National Association for Business Economics (NABE), U.S.A. 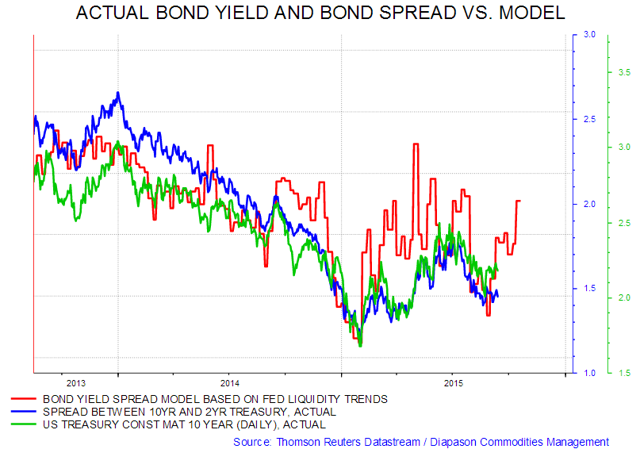 Model's Follow-through Forecast: Long Treasury yields will continue to decline until at least early March 2016, with brief countermoves to the upside.