Robert Balan has 5 decades of experience in the financial markets. Education in Mining Engineering, Computer Science & Engineering, M.S in Quantitative Finance, and training in Economics led to a commodity analysis career during the commodity boom of the early 1970s. Robert made a switch to global macro focus in the early 1980 when the commodity bull market waned, with specialization in foreign exchange. Robert wrote a very high profile daily FX analysis while Geneva-based (Lloyds Bank Int'l) in the mid-1980s (the first FX commentary with a real global readership, "most accessed" in the Reuters and Telerate networks from 1988 to 1994).

He worked for Swiss Bank Corp and Union Bank of Switzerland (precursors of today's new UBS) as head of technical research in various finance centers (London, New York, and subsequently, head of prop trading at SBC in Toronto ) from the late 1980s to mid-1990s. A stint at Bank of America as head of global technical research followed in late 1990s to the early 2000s.

Robert wrote a book on the Elliott Wave Principle in 1988, which has been hailed by the London Society of Technical Analysts as best ever book written on the subject. Robert is a member of the National Association for Business Economics (NABE), U.S.A.

The US Dollar is being primed for a strong, although probably brief, rally during the summer of 2016

On a trade-weighted basis, the Dollar hit a 15-month low on Tuesday, May 3. Over the course of less than 2 weeks, it has risen by 2.8%. Compared to equity or commodity movements, that is minuscule, but in currency terms, that is significant. On that day, the US Dollar briefly fell after the payroll data, but came back strongly to finish the day at the high. The Dollar's strong come-back suggests that the financial markets may be having a rethink of the factors that made the Dollar weak over the past few months. Those factors are starting to evolve to produce a more favorable outlook for the US currency, at least in the near-term.

As we discussed in the last Commodity Insights Weekly (CIW) report ("Gold net long positions are overstretched: gold price may correct as the US Dollar makes a short-term recovery", May 9), the previous weakness of the US Dollar was encouraged to a large extent by the flip-flops of the Federal Reserve on their long-sought quest for "rate normalization." The Fed turned "dovish" since they tightened policy in December. Tumult in international financial markets stayed the hands of the central bank hawks, and that allowed Fed doves to gain the upper hand in subsequent FOMC deliberations.

Thus far, the ascendancy of the "doves" led the Fed to pause in its rate "normalization" it has always wanted to do, and reduced the expected pace of rate hikes in 2016 by half. That paved the way for a weaker US Dollar and enabled gold and other precious metals to shine. In a previous CIW report ("It is time to refocus on the US Dollar as a key driver of risk-on, risk-off", April 12, 2016), we made some observation and forecasts, which included the likelihood of the US Dollar (DXY) falling to the area of at least 92.00 and perhaps slightly lower. That event has come to pass, and so we now look at the other side of the coin - a US Dollar recovery over the next few months.

But why and what will make the US Dollar continue becoming stronger from here? To answer these questions fully, we have to first analyse the reasons which caused the US Dollar to sell off from December last year, deviating from its strong upside trajectory of the past 3 years. There were four main causes of the weakness: (1) the long-feared cataclysm in China has mostly subsided, after recent data suggest that the Chinese economy is bottoming. The price and usage of construction materials and steel bars are rising, the property market is heating up, money growth has accelerated, and industrial profits are recovering; (2) the Fed has turned dovish (as we discussed above) and that has done plenty to weaken the dollar. The March FOMC statement was clearly on the dovish side, as were most subsequent speeches by key Fed officials, as economic conditions in the US deteriorated. Real GDP in the first quarter increased at a measly 0.5% annualized pace, following only 1.4% in Q4 of 2015. In addition, the Fed is now giving more weight to developments outside the U.S. Fed Chairman Janet Yellen had admitted that she and her colleagues "wanted to adjust our thinking about the path of policy" in response to the still-fragile global growth environment, which was the case until the end of Q1;

(3) The NIRP (shorthand for Negative Interest Rate Policy) applied by the Eurozone and Japan, resulted in decline in inflation expectations on those areas and put upward pressure on their real rates, leading to unwanted currency strength for EUR and JPY, and corresponding weakness in the US Dollar; and (4) the market sentiment had become too Dollar bullish towards the end of 2015. So the overstretched technical factors helped prime the selloff in the greenback. It was a fact that the bullish sentiment on the dollar had reached highly elevated levels in December 2015, a fact that was echoed in near-record long dollar positioning among currency speculators. Once the fundamental factors that started to favor the other major currencies materialized, the Dollar sell-off accelerated.

What to expect from here

So knowing the reasons for the 2-quarter US Dollar weakness, what can we expect going forward? The primary consideration for the turn-around in the US currency earlier in the month had something to do with changes in market perception about the strength of the US economy, and how it may affect the Fed's evolving stance on policy tightening this year. We believe that the Fed's dovish tone will likely to change in 2H this year. Financial conditions in the U.S. have eased significantly over the past few months, thanks to falling corporate bond spreads, a rising stock market, and the weakened US Dollar. Such easing positively impacts the real economy after a lag of about 6 months, suggesting that the time window of those easier conditions to impact the real economy is just about to start now. That is in fact visible in the way that US growth has ticked up in the recent weeks in the Atlanta Fed GDP Nowcast Tracker which is now showing 2.8% growth for Q2 (see the first chart of the week below). 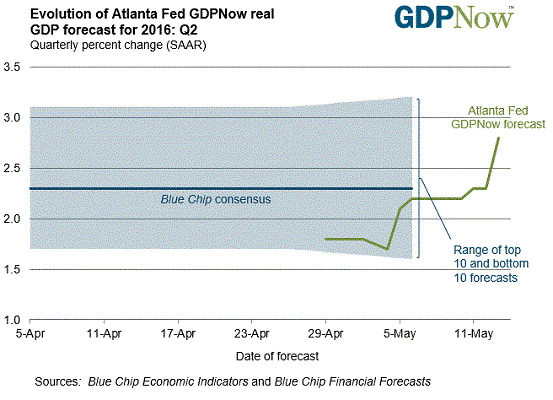 Tightening labor market slack will also likely push up actual inflation and inflation expectations over the coming months. The unemployment rate has fallen to 5%, just a smidgen off the Fed's estimate of full employment. Job growth is strong and consistent, and jobless claims are still on a clear downward trajectory as it has been for several years. Broader measures of labor market slack (the U-6 rate) support the proposition that the output gap has nearly closed. Conventional measures such as average hourly earnings are distorted by the inflow of low-skill workers back into the labor market, creating the impression that there is no wage inflation. But more refined measures such as the Atlanta Fed's Wage Tracker (see chart below) do show a clear acceleration in wage growth. 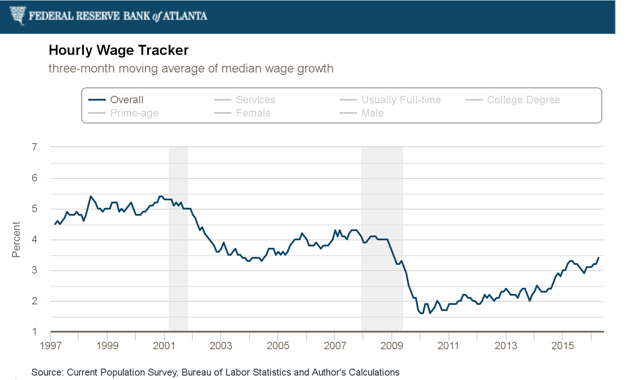 In addition, with the household debt-to-asset ratio now approaching levels last seen in the 1990s, consumers have plenty of capacity to ramp up their borrowing. At the same time, the cost drag on inflation is set to diminish as the oil price stabilizes, and the dollar's recent softness implies further inflationary pressure. On core inflation (excluding the food and energy components), the trend suggests that the Fed is falling behind the curve. Core CPI is at a post-crisis high, having risen 2.3% year on year in February, 2.2% in March, and by our reckoning, another rise in April. It is likely therefore that inflationary pressures will mount as the year progresses. 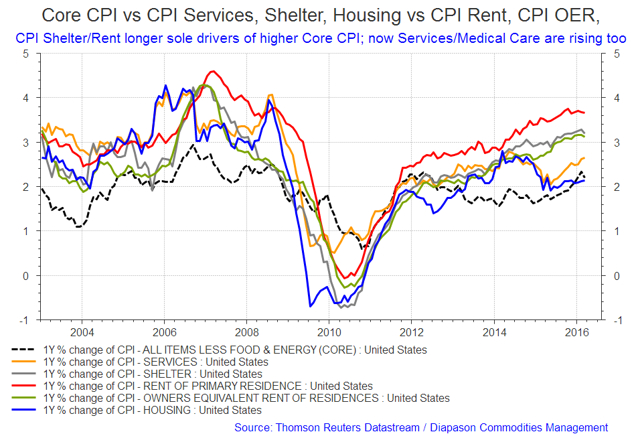 The Fed will refocus on US domestic issues

Simply put, domestic progress since the horrible economic circumstances of early Q1 puts the Fed, with a newly-adopted international mandate, in a difficult position. The Fed was and still is essentially trapped between a US economy that increasingly justifies normalization of monetary policy, and the interest of the global markets - in which about 60 of the world's transactions are Dollar-denominated - that had driven the Fed into its current dovish stance. For the reasons discussed above, we believe that the Fed will abandon their dovish stance soon. To assume that the central bank will in fact ignore their domestic mandate for longer, and continue to remain solicitous of international markets (which have already significantly improved) and not tighten policy for the whole year, is not a very viable hypothesis to bet money on.

As we see it now, the Fed is being primed by the current benevolent financial markets and financial conditions to change the tenor of their story. We can not be complacent that a July hike will not happen -- we believe that it is still pretty much in play. If the Fed changes its tune, as we believe they would, it should strengthen the US Dollar, and that, mechanically, would weaken the price of gold/ precious metals and other commodities. Nonetheless, we do not see another overpowering US Dollar performance - we start with the assumption that reinstatement of the outlook of two rate hikes this year (whether they would actually happen or not) could allow the greenback to claw back circa 50 percent of its losses from its recent highs. Our US Dollar TWI model shows how the US currency may perform over the course of summer this year (see chart below). But by late Q2 2016, the US Dollar may be downward abound again, and so would allow hard assets, including commodities and precious metals, and strong finish for the year. 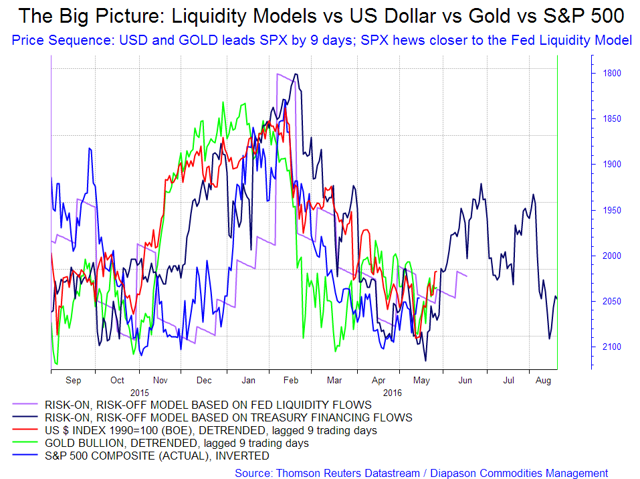 I wanted to make this into a more detailed SA article, but no more time. Have to dash to the hospital. See u guys next week.