Matthew Sauer, Esq. is the President and Chief Investment Officer of the Mutual Fund Investor Guide. Each month he publishes the Investor Guide to Fidelity Funds, Investor Guide to Vanguard Funds and ETF Investor Guide. On a weekly basis he publishes the Global Momentum Guide, focusing on sector specific mutual funds and ETFs. Before launching the Mutual Fund Investor Guide, Matt served as the President and Chief Investment Officer for the Fidelity Independent Adviser family of newsletters. Under his tenure, over 30,000 subscribers followed his investment commentary. From 2004 to 2013, Matt served as the Chief Operating Officer and Managing Partner of Dion Money Management, an independent wealth adviser that managed over $900 million in assets. Mr. Sauer earned his Juris Doctor from Albany Law School of Union University, Albany, NY and is a licensed attorney in the State of New York. He received his Master of Business Administration, from the State University of New York at Albany and graduated from Bucknell University, earning his Bachelor of Arts in Political Science and Economics. Having passed the Uniform Investment Adviser Law Examination, Mr. Sauer is an Investment Adviser Representative licensed in the Commonwealth of Massachusetts.

Oil prices have settled into the low $50 range and a positive short-term bullish trend remains in effect. Given the volatility in the oil market and geopolitical risks, this relative calm may be shattered at any moment, but for now, prices are pushing higher. One factor helping the market is that U.S. oil production is either beginning to drop in some areas, or projected to drop by May. This should ease inventory pressure and begin moving the market back towards a balance of supply and demand. The data from last week favors this view: oil inventory grew at a much slower pace.

Energy remains key for the stock market because weakness in this sector is why large-cap stocks have only gained about 2 percent since November. XLE is challenging its February high today and a push higher will open up a move towards the November levels. If that happens, the broader stock market will rally.

Energy was the best performing sector over the past week, more than doubling the return of healthcare stocks. The worst performers were utilities and consumer cyclicals, which were down less than 0.2 percent.

Among sub-sectors, solar remains strong and biotech continues to pull the healthcare sector higher. Internet funds were slowed by the EU filing a complaint against Google (GOOG). Homebuilder confidence climbed to its highest level in almost a year in this month, allowing homebuilder ETFs to be on the verge of a new 52-week high. 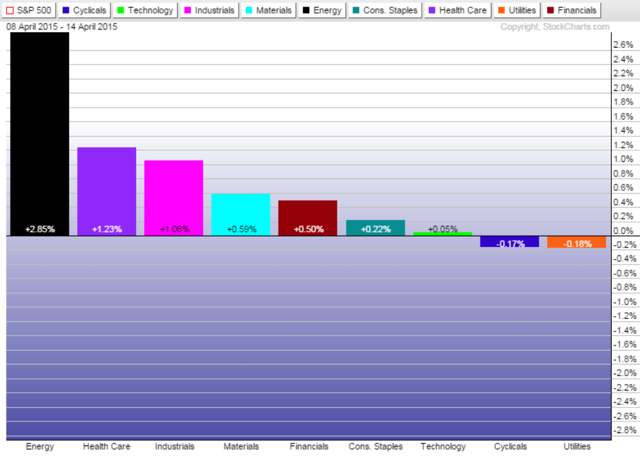 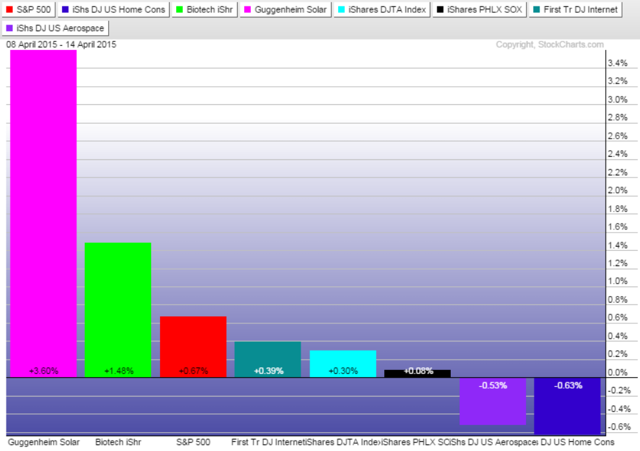 TAN is approaching its 2014 high. We had expected a correction in recent weeks because interest rates continue to fall, which typically leads to weaker performance in solar stock. If TAN doesn't correct soon and continues on the current trajectory, it will make a new multi-year high a possibility. It would then open up a challenge of the $70-plus highs from 2011, about a 40 percent move from current levels.

The big story in the currency markets this week was a rumor that the Greek government is preparing to default on an IMF loan. This sent the euro back near its lows for the year, before recovering. Although the Greek government denied the rumor, it will continue to hang over the market. The euro has been in a range between $1.05 and $1.10 since hitting its lows and it's likely to remain at those levels until the latest Greek situation is resolved.

Value stocks have rebounded strongly since late March, aided by the rally in energy. It's still too early to say if a significant shift is underway, but a trend is intact. Value stocks represents a good opportunity relative to growth, given that is has underperformed for almost the entirety of the post-2008 bull market.

The surge in Hong Kong traded shares finally took a pause. The Chinese A-share market remains in a steady uptrend and has gained more than 100 percent over the past nine months. Volume on the Shanghai exchange now regularly exceeds the levels seen at the 2007 peak, when the Shanghai Composite crossed 6000. Going solely by the volume and the growth in the economy, a move to new all-time highs is not hard to imagine. It also only took the Shanghai Composite a little more than 2 years to go from 1000 to 6000, a 600 percent advance, so the current pace of the advance has precedent.

China's market is dominated by retail investors, which is why it is more prone to booms and busts. Psychology plays a larger role and most participants in the market are traders looking to sell shares at higher prices, not investors evaluating company fundamentals. Right now investors are pouring into the market and new investors are the fuel for higher prices. When they stop opening new accounts or psychology shifts, the same stampede into the market that carried it higher, will cause devastating losses for those who stay too long.