Mr. Hammer is a biotechnology analyst, focusing on small and mid-cap biotech stocks. He holds a MS in Biotechnology and specializes in targeted therapies for cancer and autoimmune diseases. Visit his blog at http://www.hammerstockblog.com.
The past 12 months have been anything but boring for Micromet’s shareholders (OTCQB:MITI). Last summer, Micromet’s stock climbed to $7 following excellent clinical data (discussed here) and a landmark publication in Science Magazine (discussed here), but since then the company has lost half of its value. Volatile trading is quite standard for small, cash burning biotechnology companies, however, Micromet’s case was particularly frustrating.
Micromet invented a new class of antibodies it calls BiTE (Bispecific T-Cell Engager) antibodies. Unlike conventional antibodies, BiTE antibodies bind two targets, the first target is presented on a cancer cell and the second is presented on an immune cell. The simultaneous binding of both cells by the BiTE antibody can redirect the immune cell to attack the cancer cell, thus exploiting the body’s natural immune mechanisms to fight cancer. Conceptually, a BiTE antibody is similar to cancer vaccines, which also aim at producing an immune response against tumors. Despite a history of failures in the field of immunostimulating antibodies, it looks like Micromet has found the right formula.

The small size of BiTE antibodies could also confer an advantage over conventional antibodies in terms penetration. Small antibodies are believed to have better penetration properties, so they can reach areas that are less accessible for normal antibodies, especially the inner compartments of solid tumors or bone marrow. This might, in part, explain blinatumumab’s ability to purge patients’ bone marrow so efficiently. The better penetration could also be important in solid tumors, where the core of the tumor is less accessible.

2009 events
Micromet is looking at a busy 2009, with three important value creation points.
The first event will occur this June, with the update from the phase II ALL study. The results may show two important features. The first one is blinatumumab’s ability to clear disease remnants from additional patients’ bone marrow, while the second feature is response duration. Positive results will set the stage for a registration trial next year.
The second event will occur at the European Cancer Organization (OTC:ECCO) meeting in September. Micromet expects to present data for a second BiTE antibody, MT110. Although little to no value is ascribed to this agent, a good data set could have a huge impact. Apart from being the second BiTE antibody to generate clinical data, MT110 is the first BiTE antibody that targets solid tumors. Solid tumors have always been more difficult to treat and they are characterized by lower success rates, particularly due to accessibility and drug penetration issues. Theoretically, BiTE antibodies are ideal for eradicating solid tumors because they have better tumor penetration and a mechanism of action that involves amplification. Solid tumors typically require higher doses compared to blood cancers, so in this trial Micromet might have to dose escalate all the way to the maximum tolerated dose for a therapeutic effect. Therefore, the trial might provide more data with respect to the toxicity of BiTE antibodies. MT110 targets a protein called EpCAM, which is expressed in some of the most common tumor types, including lung and colorectal cancer, so it represents a huge commercial opportunity. In contrast to blinatumumab, Micromet owns 100% of the rights to MT110, so the upside potential, as well as the risk in this program is substantial.
Lastly, the third event should be at least one new licensing deal for a BiTE product. The company stated it expects to announce at least one deal but refused to provide additional details. In the first half of 2010, Micromet will probably launch a pivotal trial in ALL with potential approval in 2012, but at the moment, the company has cash reserves that will finance operations through the second half of 2010. Therefore, Micromet must find an additional source of capital already this year, in order to have more than a year’s worth of cash. MT110 could turn out to be a huge value creator, but data is expected only towards year end, and of course, the nature of the data is unpredictable. This leaves Micromet with two options to get a meaningful cash infusion. The first option is doing another equity placement, which could be relevant only at higher price levels. Another option is finding a new partner for blinatumumab. According to the amended agreement with Medimmune, the US rights for blinatumumab cannot be partnered until the drug is approved, which leaves only the international rights on the negotiation table. Micromet will probably want to keep the European rights, so it should try to do what Arqule (ARQL) did in 2007 and license the commercialization rights for the Japanese market, the second largest oncology market in the world. The Japan based pharmaceutical companies have been very active on the M&A and licensing front, especially in the oncology field, so Micromet might find a bidder within several months. The financial terms of the deal will depend primarily on the data Micromet will present at the EHA meeting this summer.
In summary, dsepite Medimmune’s decision to abandon blinatumumab, its prospects are as bright as ever. During 2009, Micromet will have several important events, including at least one licensing deal and two potential proof of concept events in ALL and solid tumors. On the financial front, the recent development turned 2009 from an originally worriless period into a more challenging year, as Micromet will have to raise at least $30M through licensing deals or other means in order to make it to the finish line. 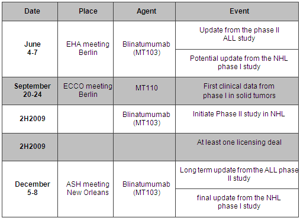