While all eyes have been focused on the European debt crisis, MENA, Japan, and the weak U.S. data, this obscure market deserves some attention. It is often the market we aren’t look at that do the most damage.
Beware CDS Indices Trading Cheap
The CMBX tranches are all now trading below their March lows and are approaching levels last seen in September 2010. The cash indices appear stronger, but that is often the case in illiquid credit markets. The scenario that has played out time and again in credit markets is where the CDS indices lead the way. The indices go down and trade ‘cheap’ to fair value. This leaves cash investors scratching their heads as they don’t understand why the CDS index is doing so well.   At some point the move in the CDS index causes enough fear that they decide they should sell some of their assets, just in case the index is correct. That is when they find out that in spite of Bloomberg screens full of run after run of ‘markets’ on the bonds they own, they cannot find a bid at the prices quoted. Dealers will work an order lower, but won’t provide liquidity. This lack of street liquidity usually happens after the street is caught long having missed the turning point when the market went from bid without, to offered only. This lack of liquidity in the cash market then scares the bond holders. They either choose to sell down their bonds, or more likely decide to hedge a little with the CDX index. This makes the index even ‘cheaper’ to the cash. For markets with thin (nonexistent) single name CDS markets, this process is amplified, as the ‘arb’ community cannot come in and go long the index via the single names. This certainly applies to the CBMS market, so it has all the features that have led to rapid price declines in other credit markets.

So long as there is no real fear in the market, this move can be contained. It will stabilize, and some brave investors will decide the underlying market looks cheap and play it through the ‘cheap’ CDX index. That trade often works extremely well if the market stabilizes, as the asset class performs and the index does even better as shorts get pushed out and the ‘cheapness’ goes away.

The problem occurs when fear of the underlying assets grow. Whether it was leveraged loans and the LCDX, sub-prime mortgages and the ABX, or for those with longer memories, the auto makers and IG indices, the spiral of weaker index reinforcing weaker cash prices can begin.
Is there any risk that CMBS can spiral down?

There are some real problems in the market. The supply of new issues is increasing putting pressure on the secondary market. Delinquency rates spiked up April and remain high according to TREPP. Commercial property prices have started to decline again this year according the Moody’s/REAL Commercial Property price index. Vacancy rates seem to be sending mixed signals, but in spite of all the positive retail sales data, the mall vacancy rate remains elevated. With a weak job market and slower retail sales there is a strong case to be made that we could see vacancies rise. All of these combine to put real pressure on the market which makes the potential cycle of sell index, sell bonds, sell more index lower, a likely possibility.
Why aren’t stocks moving?

One answer, likely to be served up by the bulls, is that the CMBX market is wrong. They will argue that the cash market is correct. The other answer is that credit is a leading indicator. The credit investors focus on the downside and see it sooner. They realize that the bids in the bond market aren’t very real and are not deep. They can see that the market doesn’t have the liquidity to absorb a real seller of CMBS. If the credit markets are leading the way then look at IYR or some of the big names in IYR as short candidates. Shares outstanding in IYR dropped significantly in early May. That trend has stabilized but the shares outstanding still remain well above their longer term averages, leaving room for additional withdrawals from this market.

If you think the credit markets are wrong, it is hard to find a good way to play that without getting long CMBX (I wish the CDX indices were exchange traded by now). From a short end, most of the stocks have ignored the weakness in CMBX and offer an opportunity to short.  IYR, SPG, and VNO are prime short candidates.  They have continued to perform well but would be hurt by any problems in the CMBS market.  They are just starting to get weaker so momentum investors may pull out, further helping the short position.
How are other credit markets behaving?

ABX, to the extent it really exists, is behaving a lot like the CMBX market. It is getting weaker and is spreading into even the prime market. The U.S. indices are trading a bit heavy as everyone seems to be long credit and has not been scared out of their positions by the noise in Greece. IG16 is trading a little cheap to fair value, but the single name market is still robust and can handle any arb activity, keeping the indices, CDS, and cash in line. The HY market is seeing HY16 trade more than a point cheap. The single name market there is too illiquid to attempt the arb at that level of cheapness, so that will keep pressure on single name CDS and potentially the cash market. We saw the HYG ETF move down yesterday by a half point more than the dividend. Shares outstanding are very high and if people become nervous that 7.4% yield is not really ‘high’ yield, regardless of how cheap the market looks on a spread basis, we could see some sellers. For all the chatter about HY being cheap on a spread basis, it trades on a dollar price, and the call features provide extreme negative convexity in a downturn.

FINS and SOVX has performed better than other CDS market over the past few days. They outperformed their cash markets, but that makes sense as shorts and hedgers decided to cover on the positive rumors coming out of the EU/ECB/IMF regarding Greece. Now that the squeeze is over, they have taken on a weaker tone again as investors look to protect themselves.

So far none of the credit cash markets have experienced any real selling pressure. The difficulty in sourcing bonds is still too fresh in most investors minds that they are reluctant to sell cash. It is hard to beg for allocations on new issues one week, and then sell down a big chunk of inventory the next. Investors have cash and claim they are willing to put it to work, so choose to short a CDX index as a temporary measure. The strength these markets have experienced is so strong that this likely won’t change for awhile, but it is worth watching to see if the indices get cheap, particularly in high yield. And if I had a nickel for every time a manager who said they were looking to buy bonds 5 bps cheaper decided to actually sell when they were there rather than buy, I’d be a very rich man. Hedge funds in particular have to be very careful of their performance, and it doesn’t take much of a downturn to scare them out. With overall yield levels so low, many hedge funds must be running some leverage to get to target returns above 10%. That would make the switch from ‘buy the dip’ to ‘lightening up just a bit to be prudent’ easier to trigger.
So focus on CBMS and keep a close eye on HY.
CMBX AM Chart 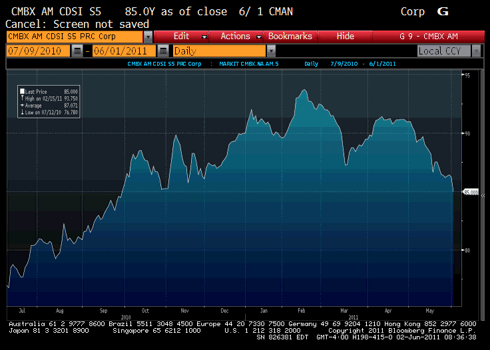 Disclosure: I have no positions in any stocks mentioned, but may initiate a short position in IYR over the next 72 hours.