AlphaStratus is a leading provider of 13F software that gives investors the data and tools to efficiently and comprehensively analyze 13F information. Transparency among hedge funds remains poor making it more important than ever for investors to leverage available sources of information to extract the intelligence necessary to make informed decisions. AlphaStratus serves hedge funds, fund of funds and family offices. Visit AlphaStratus.com or email info@alphastratus.com for more.

T2 Partners co-founders Whitney Tilson and (the less famous) Glen Tongue recently announced in a letter to investors that they were closing T2 Partners and going their separate ways.

Tilson will remain at T2 but will re-invest from scratch. Glen will leave to start his own fund.

Tilson is a died-in-the-wool value investor and a huge fan of Warren Buffett. Berkshire Hathaway has been a consistent top holding in the fund every year. A list of all T2's top 10 stock picks (for the last 5 years) is shown below: 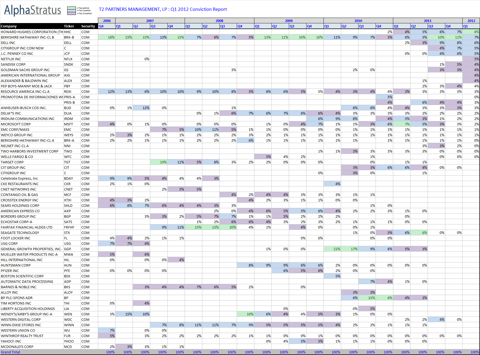 Berkshire Hathaway aside, T2 had some very good timing on its top position in 2009 & 2010, in particular (GGP & STX). Replicating his top position over time (buying 1 week after each 13F is released and holding for 1 quarter) would've earned you alot of money: 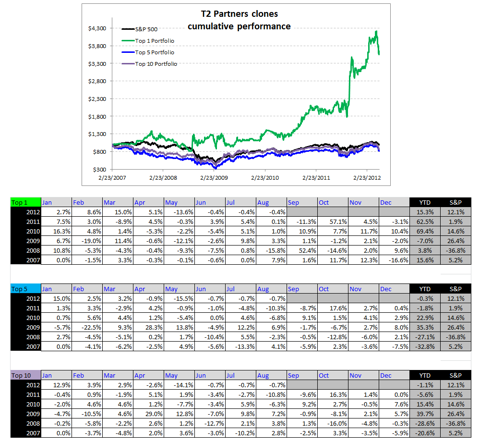 It will be interesting to follow Whitney Tilson and Glenn Tongue's new funds going forward to see which one BRKB ends up in...and which one is worth cloning. T2's most recent top pick is especially interesting. Howard Hughes Corp (HHC) is the company that was spun out of General Growth Properties after bankruptcy in 2010:

This company has had quite a run but stil looks compelling on a number of levels. Another interesting fact is that Bill Ackman at Pershing Square owns 3,568,017 shares which is over 9% outstanding as of the most recent 13F. Ackman is not known for sitting by idly without forcing an event to unlock shareholder value. And given the track record of T2's top picks over time, this could prove a profitable play for investors.