Why “Playing the Ponzi”? I view the entire monetary and financial system as something of a Ponzi scheme. Starting with currency that is created as debt, and running straight through a global economic model that is based on infinite growth in a finite world. This won’t end well. I’d go a step further and suggest that our materialistic value and belief system is another way in which we’re building castles on sand… but I digress. I view our financial markets as a casino, and frankly, I like gambling. I prefer technical analysis to fundamental analysis because I find the “behavioral” side of investing more interesting than longer term projections based on financial/numerical analysis. Pictures make more sense to me than numbers. I'm dumb like that. As for an investing “philosophy”, I believe in small/micro-caps. I believe the market rewards growth above all else, and growth is easiest (to spot, at least) and most explosive when a company is young and small. As a company matures, its growth inevitably slows. Microcap stocks tend to be extremely volatile so I believe strongly in taking profits on the way up (or exiting quickly if the entry point proves poor). I attempt to buy stocks that are pulling back in the midst of a longer term uptrend. I hold anywhere from hours to years, but usually in the 3-6 month range. I am an amateur investment enthusiast, who has committed every investing cardinal sin at some point - and sadly, sometimes still do. Between first entering the markets in 1999, and 2002, I lost 90% of my seed money. Since then, I’ve found an approach that works reasonably well for me. My average return has been about 20% annually since 2003.

IWM, the Russell small cap ETF, broke under long term trend line support earlier this month. It has rallied back to the trend line. A failure here would likely suggest more downside to come. 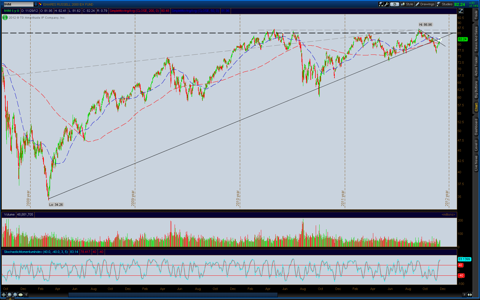 Here is a closer look at just the last twelve months: 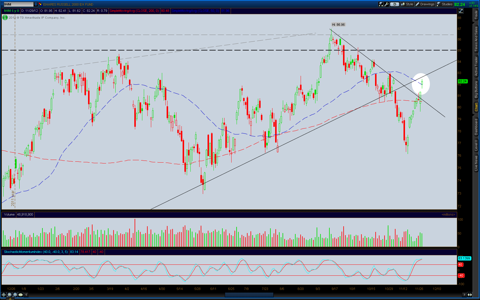