Manager of the Fifth Quarter Fund, a long/short equity hedge fund based in San Jose, CA. Multiple years of investing in stocks and options, with a recent focus on trading volatility ETFs and options.

Now that everyone has had some time to digest the results of the recent US election, the discussion turns to the short-term and long-term impact on the US markets. Prior to November 6th, there seemed to be consensus that the "market" favored a Romney victory and that a second Obama Administration would be "bad" for the stocks long-term. The reaction in the US stock market the day after the election seemed to support this view. Indeed the DJIA (^DJI) was down over 700 points (5%) at its post-election low; the S&P 500 (SPY) was also down by 75 points (approximately 5% as well).

However, on closer inspection this election revealed a great deal of information that, based on historical trends, may actually be good news for stocks and bonds in the long-term. In order to understand what this impact may be, it's worth reviewing some of the salient points from the election results and see what they tell us about the future political landscape.

First, the popular vote for President is still very close. Obama's margin of victory here was approximately 2.5%. However, in the Electoral College (which Obama won handily 332 to 206), the Democrats seem to have a substantial advantage that is solidifying. This is because the voting patterns revealed what demographers have known for some time: minority groups -- Latinos, Asians, and African-Americans -- are becoming a larger part of the US population and hence the electorate. The figure below from CNN summarizes the voting breakdown by ethnic group and compares it to 2008 election. 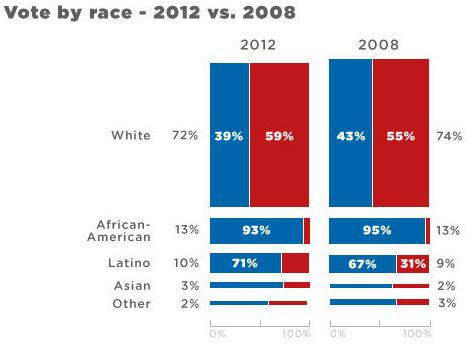 As we can see, a comfortable majority of Latinos and Asian-Americans vote Democratic and those percentages have increased since the 2008. The African-American support for Democrats dropped slightly from 2008, but is still comfortably over 90%.

The growing population and influence of minorities in this country is not news. Demographers and the recent census have been telling us that the United States will eventually become more "non-white" than "white".

The Pew Research Center published a widely-quoted report on population trends and projections up till 2050. According to their analysis, the past 40 years has seen 40 million new immigrants to the US, making this the largest immigration wave in US history (based on absolute numbers, not percent increase). As we know, earlier immigrant waves, such as in the early 20th century, were almost entirely European. However this more recent wave has had a substantial number of Asian and Hispanic immigrants. 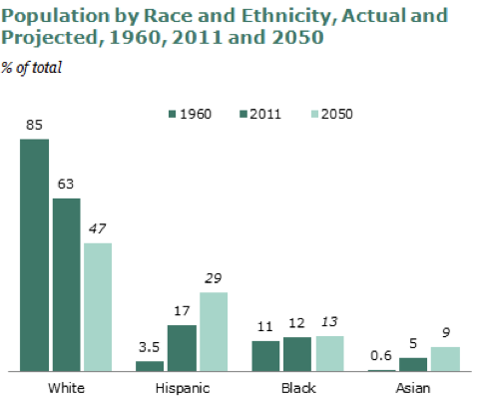 One of the Pew report's authors also wrote an interesting analysis of the recent election, with some of the conclusions summarized in the figure shown above. The Latino population is currently the nation's largest minority group. It will triple in size and account for most of the United States' population growth through 2050, when they will account for 29% of the total population. Whites will become a minority by 2050, dropping to 47% of the population. The non-white ethnic groups comprise 37% of the population today and cast 28% of the total votes (according to exit polls) in the 2012 election. Not only was this a record, it is expected to increase in future elections. These minority groups taken together gave 80% of their votes to President Obama.

Key takeaway #1: the minority groups of today will be the majority in two generations. Their voting preference to date has been leaning strongly Democratic.

This shift in the electorate at the national and state level brings about a whole new political calculus for both political parties. White working-class voters, older voters, and those in rural areas can be counted on to vote for the GOP. In contrast, Democrats are winning handily in the major cities and suburbs that are growing and have a mix of whites and upwardly mobile minorities.

The "electorally critical" swing states, such as Iowa, Pennsylvania, Colorado, and Nevada, have been Democratic-leaning in the past two elections and all went to Obama in 2012. This shift, while only giving Democrats a slight advantage for now, may grow if the Hispanic and Asian-American population continues to grow and voting patterns stay the same.

Ohio and Florida was the focus on much attention in the days leading up to the election. As it turns out, Obama didn't even need those states -- and their combined 44 electoral votes -- to win. By winning the other swing states, Obama gave himself enough of a margin. He ended up winning Ohio anyways and eventually Florida when they were done counting.

Nate Silver, author of the FiveThirtyEight blog in the New York Times, makes a key point: the Republicans are winning some states such as Tennessee, Kentucky, Arkansas, and West Virginia by very large margins; so large in fact that neither presidential candidate bothers to campaign there much. However, this large margin of victory is not reflected in similar Electoral College gains, since the system doesn't allocate "extra" electrical college votes to account for their blowout margins. So the Republican's victory in these states is "inefficient" from an Electoral College point of view.

The narrative of all the elections in the past decade is that if any party can win its "base states" and a handful of the swing states, they can get enough electoral college votes to win the Presidential election. The problem for the current Republican Party is that this wave of minority voters will start to have more of an influence in some of their "base states", especially in the Southwest.

This can be seen in a great series of interactive graphics published in the Wall Street Journal. The most interesting result shows the counties that have become more blue since 2004. This shows a clear trend of counties in the Southeastern states trending Democratic. There are states where the Republicans have counted on solid support for decades. If any of these sure-fire red states in the South "flips" to blue in the coming years, it will spell trouble for the Republicans in the Presidential race. Most of the counties and states getting redder are already solidly Republican -- which doesn't buy them much in the way of Electoral College advantage.

Key takeaway #2: Due to the distribution of Electoral College votes and change in voting patterns of key states, the Democrats may be solidifying their advantage in the race for President despite a close popular vote.

While the Democrats may hold the advantage for Presidential races, the calculus of state and local elections can be very different. Very often (and certainly in many places this election), voters are comfortable casting their ballot for leaders of one party at the local level and the opposing party at the state and national level. Ostensibly, this is because one particular issue, support for a ballot measure, etc. may dominate voters' political party preference at the local level.

In fact, Republican's still enjoy historically high levels of representation in state legislatures and governorships. Even with the tectonic demographic changes discussed above, we still have a split in governance with the Democrats holding the Presidency and the Senate, the Republicans holding the House (albeit the numbers from each party in Congress did favor the Democrats).

Key takeaway #3: Neither political party is expected to dominate both houses of Congress and the Presidency simultaneously. Split governance is likely here to stay.

So - what does all this mean for the markets? There are a few trends and predictions we can make based on historical data and what we have seen in the past few weeks: 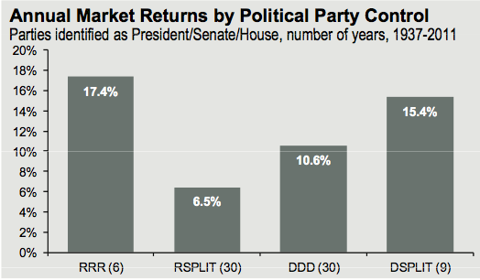 Disclosure: I am long SPY. I wrote this article myself, and it expresses my own opinions. I am not receiving compensation for it. I have no business relationship with any company whose stock is mentioned in this article.

Additional disclosure: I have a position in SPY by selling near-term out-of-the-money puts in the ETF.