Amid the earnings flurry this week, Bloomberg will host a virtual event that will focus on how the disruptions of 2020 will impact navigating 2021.

Tuesday’s session will be of particular interest as executives from among the Consumer Discretionary (NYSEARCA:XLY) subsectors hit hardest by the pandemic appear, Seeking Alpha’s Catalyst Watch notes.

Consumer discretionary has been one of the most intriguing S&P sectors during the pandemic given the different groups. There were the early e-commerce and discount-retail winners, but the beaten-down groups, like those represented at the event, have always had a strong Robinhood enthusiasm as comeback plays.

That was often hidden by its overall performance being dominated by Amazon (NASDAQ:AMZN), and the addition of Tesla (NASDAQ:TSLA) has only made XLY more top heavy.

Recent performances for the stocks featured at the event are mixed.

Hilton is down 8% from its post-pandemic high hit on Jan. 8, but up nearly 32% in the past six months.

A decline of 3.6% on Friday took the price below the 50-day simple moving average of about $107, moving below that level for the first time since Nov. 3.

CCL is seeing a similar technical pattern as HLT. It fell below its 50-day SMA on Friday for the first time since Nov. 13. There was a “golden cross” bullish signal on Dec. 8 when the 50-day rose above the 200-day.

Looking to ETFs, the SPDR Retail ETF (NYSEARCA:XRT) has Kohl’s at a 1.1% weighting, which is just in the top third of the holdings (its top weighting is suddenly GameStop).

XRT is at a record high and has been in overbought territory for 11-straight sessions. Its relative strength index is at 78.71. 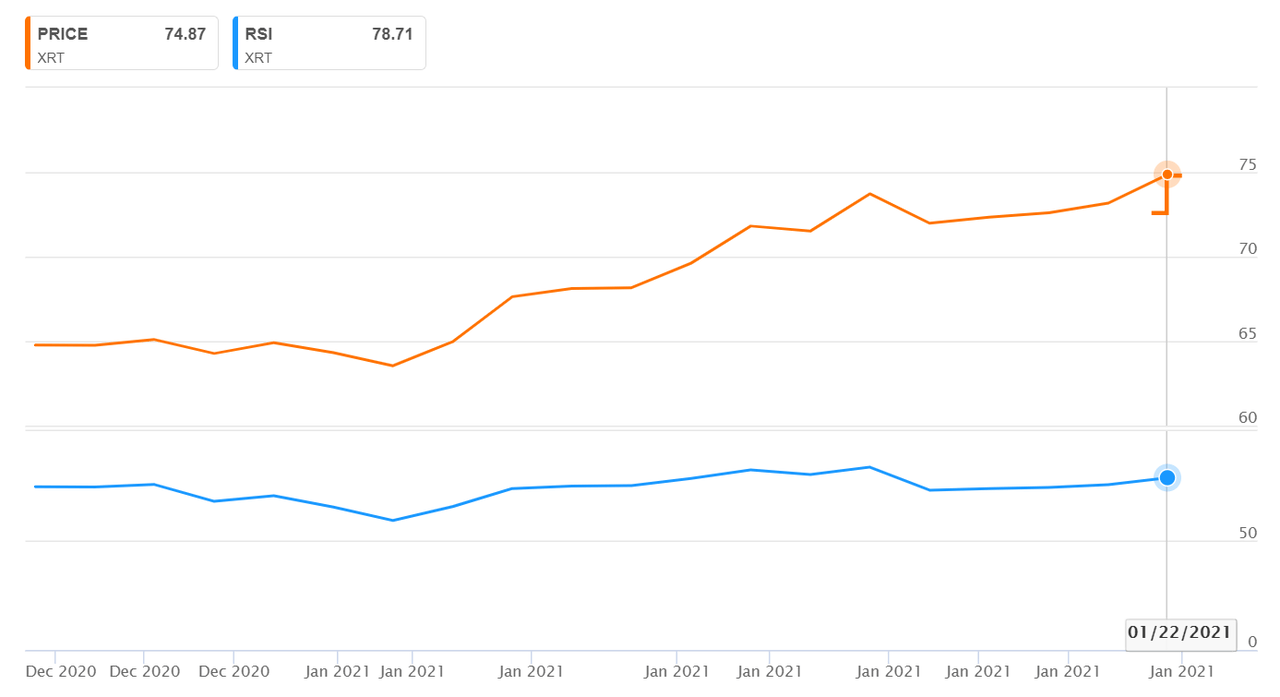 It’s also looking at a record distance between price and the 200-day SMA at nearly 50%.

Seeking Alpha contributor Dividend Seeker recently wrote a comprehensive report on XRT, noting that while "I believed in the story behind the fund and was bullish heading in to 2021, these recent gains seem to be a bit extreme. As a result, I believe caution is warranted. For investors, this could mean holding off on new positions, or taking some profit now."

Carnival has the largest weighting in the SoFi 50 ETF (NYSEARCA:SFYF), which is a crowd-sourced ETF that picks the top 50 widely held U.S. stocks in SoFi Invest. It comes in at 17, with a weighting of 1.8%.

SFYF, which has only been in existence since mid-2019, is also at an all-time high. It’s holding just below overbought with an RSI of 68.80.

The Invesco Dynamic Leisure and Entertainment ETF (NYSEARCA:PEJ) has the most exposure to Hilton. HLT is the sixth-largest holding with a weighting of 4.4%.

PEJ is still looking to recover to the levels it hit just before the pandemic selloff, about 6% below the peak hit on Feb. 20.

PEJ has gone through a pandemic transformation with changes in its underlying index, with airlines going from the largest weighting to zero, streaming taking on huge importance and a boost in restaurant exposure, stocks that could see a big impact from a White House push to change how most waiters and waitresses are paid.