The Department of Energy provides weekly updates on the world's largest observable inventory of oil and oil products; those stocks are falling at a near record pace in 2022. Each oil market strategist has their own preferred metric, and the weekly reports are volatile, but when combining all the metrics (commercial oil, strategic reserves, oil products, etc.) and observing trends over several reports, it's clear inventories are falling fast. In the first five weeks of the year, the US normally builds several million barrels of inventory ahead of the summer driving season; this year, inventories have fallen by almost a million barrels a day (NYSEARCA:USO) (NYSEARCA:XLE). 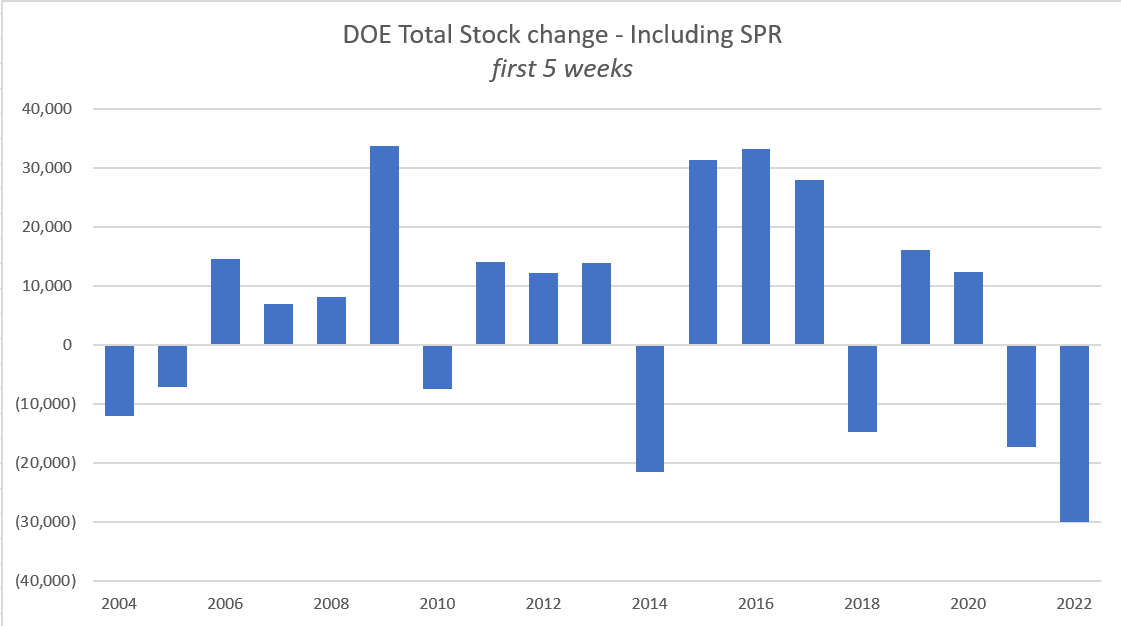 In a break from recent history, there doesn't appear to be a strong supply response to rising prices and declining inventories. When Chevron (NYSE:CVX) reported Q4 results two weeks ago, the Company guided the street to flay YoY production in 2022. Exxon (NYSE:XOM) did the same, as did BP (NYSE:BP) and Conoco (NYSE:COP). Bakken producer Whiting (NYSE:WLL) announced they plan to increase capex 55% in 2022 and acquire assets to generate only ~3% production growth. Driller Nabors (NYSE:NBR) reported earnings Tuesday and indicated they don't expect to add any rigs outside the US in Q1.

Although the inability of OPEC+ to hit increased production targets has become consensus, there's some debate on the US's ability to meet growing demand. This week Citi oil strategist Ed Morse advised clients to short the oil market, while famed oil investor Pierre Andurand suggested inflation-adjusted oil prices are relatively low by historic standards (the 2008 high of $147/b would equate to $222/b today).

The Biden administration for their part has indicated "all options are on the table" for managing energy prices. Spokesperson Psaki said yesterday the White House is talking with oil-producing countries about production increases, and oil consuming countries about strategic reserves releases. Neither tactic has done much to control prices in recent months. Although a White House agreement with Iran to allow for additional exports would create incremental supply.

With US E&Ps set to report earnings, the market is sure to be focused on the allocation of cash flow between shareholder returns and production growth. The prospect of accelerating US production would have been considered a bearish indicator only a few weeks, but may become considered healthy given current market conditions. It will be interesting to see if DOE forecasts for oil surpluses are adjusted after seeing production plans from US E&Ps in coming weeks.