Austria's OMV (OTCPK:OMVKY) announced Thursday that its refineries will halt spot sales of heating and diesel fuel until further notice, indicating the move is "a precaution" to ensure the company can meet contractual obligations. Separately, Shell (SHEL) halted deliveries of premium gasoline in Hamburg until Monday.

At this stage, shortages are likely to be presumed transitory, given the need to re-route oil feedstocks and refined product supplies. However, shortages of products are tantamount to destruction of oil demand, and the market is likely to remain laser focused on the issue. If refining capacity proves to be a bottleneck in the supply chain, refiners may be better positioned to capture the economics of a barrel than upstream producers. Certainly European refining margins rising from $1/b at this time last year, to ~$40/b currently should provide a tailwind to earnings. 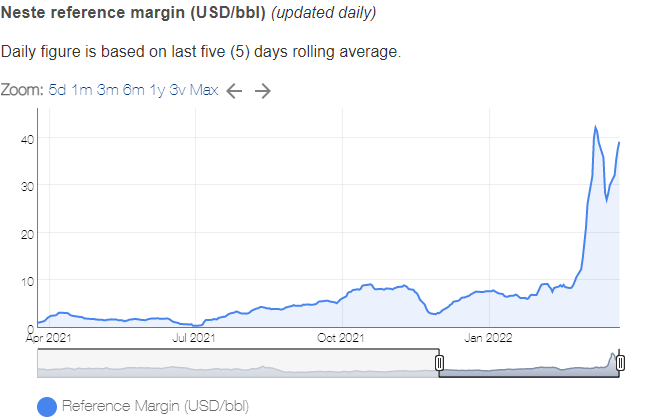 But what if shortages are not transitory? As the IEA, EIA, Aramco (ARMCO) and others discuss record oil demand, it's worth revisiting the capacity for refiners to process all that oil. In the US, capacity has fallen by ~1mb/d since 2019, as Phillips (PSX), Holly (DINO), Delek (DK), Marathon (MPC) and CVR Energy (CVI) have jumped at government incentives to convert large oil refineries to very small bio-fuel refineries. In Europe, Exxon (XOM) shut the Slagen refinery in Norway, Gunvor shut two units in Rotterdam and one refinery in Antwerp, Total (TTE) converted Grandpruits, Neste (OTCPK:NTOIF) shut Naantali and Galp (OTC:GLPEF) shut its Poro refinery. All in the past two years. According to the IEA, global refinery closers outpaced capacity additions in 2021 for the first time in 30 years.

It's too early to say if reduced refining capacity in the west, paired with Chinese policy actions, is enough to smother record oil demand. However, with refining margins at all time highs, refining capacity greatly reduced, shortages popping up in Europe, and many refineries like Phillips (PSX), Par (PARR), Neste (OTCPK:NTOIF), and Saras (OTCPK:SAAFY) trading well off historic highs, the market is sure to keep an eye on updates from management teams into Q1 results.