During the pandemic, Uber (UBER) food delivery was gaining customers, and CEO Dara Khosrowshahi was talking about entering new multi-trillion dollar markets. But Wall Street was listening. DoorDash (DASH) went public mid pandemic, raising billions in an IPO. Delivery Hero, already public, issued billions in equity and borrowed even more to finance growth. In Asia, Grab (GRAB) raised billions in a SPAC offering, as Didi (DIDI) and Zomato did the same through IPOs. The increased attention from Wall Street armed Uber's (UBER) competitors with fresh capital aimed at customer acquisition. Customer growth drove many to call food delivery a pandemic winner; however, increased competition from near limitless capital flows made profitability more and more challenging. Judging by recent share price performance, food delivery was not in fact a "pandemic winner."

In the energy sector, a cyclical downturn was mistaken for a secular shift away from fossil fuels. The view was not only held amongst investors, but shared by executives and board members alike. Nowhere was the secular decline of fossil fuel demand more anticipated than at BP (BP). Where, during the company's 2020 investor day, management shared plans to sell gas-station food via EV delivery bot. Ironically, adding to competition in the food delivery sector, if ever so slightly.

BP (BP) was not alone in allocating resources away from energy production. Wall Street left the industry quickly, with Jim Cramer famously calling the sector a "perma short" in September 2020. Bankruptcy followed, with more than 50 US oil and gas producers filing since the beginning of the pandemic. Even the government printing press refused to inject capital into the sector, as funds to purchase oil (USO) for the strategic petroleum reserve were dropped from the governments $2.0t stimulus package. As Chuck Schumer noted, his colleagues "eliminated the $3.0b bailout for big oil."

That said, it's not IPO proceeds, high yield bond issuance, or government stimulus that accounts for the lion's share of capital investment in the energy sector. Internally generated cash flow funds the vast majority of global energy investment. And energy-focused management teams and boards shared many of Wall Street's concerns. Having reduced investment in oil and gas production after oil's price collapse in 2014, spending was cut further during the pandemic: 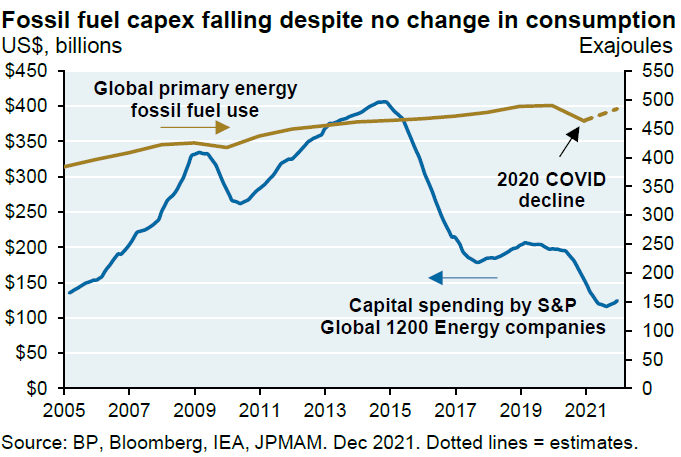 As a result, energy is in short supply, demand is at a record high, prices are predictably elevated and energy equities (XLE) are more valuable than ever. Saudi Aramco (ARMCO) replaced Apple (AAPL) as the world's largest company, and Exxon (XOM) is now worth twice as much as Salesforce (CRM). Leading some to speculate, that perhaps energy was the real "pandemic winner."