Shares of enterprise software maker Adobe Inc. (NASDAQ:ADBE) are hovering above a 52-week low after the firm's recent guidance pointed to slowing growth and macro headwinds. However, Wall Street remains bullish on the company's overall prospects, given ongoing expansion in its digital media business.

Does ADBE's cautious guidance give you a chance to buy a long-term winner?

Following the release of its quarterly results last week, ADBE dropped to a 52-week low of $346.97. Shares have since ticked off that level, rising to above $370 in Wednesday's intraday action.

The recent earnings-inspired slide has added to a longer-term downdraft. Even as it has come off its lows, the stock remains 34% lower for 2022 as a whole. Moreover, ADBE has declined more than 45% from its November 2021 high of $699.54.

The slide has come amid a revaluation of tech stocks, as rising interest rates have pressured the sector. Meanwhile, worries of an economic slowdown, which would put a crimp on business spending, has dragged on shares recently.

These concerns were highlighted in the firm's recent earnings report. On June 16, ADBE announced Q2 Non-GAAP EPS of $3.35, which surpassed analyst estimates by $0.04. The company also topped revenue expectations by $40M, reporting a top-line figure that rose 14% from last year to reach $4.39B.

However, despite these Street-topping results, the firm gave a disappointing forecast, targeting revenue of $4.43B for the current quarter, compared to a forecast of $4.51B. The yearly outlook likewise fell short of projections, with the company targeting $17.65B. Analysts were looking for a figure around $17.85B.

As a result of weaker guidance, Citi analyst Tyler Radke lowered his price target on the stock to $380 from $425. Radke kept the firm's Neutral rating and called ADBE's forecast "controversial" with commentary "suggesting enterprise summer seasonality concerns, which we translate to incremental deal slippage/macro headwinds."

Taking a similar view in the wake of the results, Bank of America analyst Brad Sills also lowered his price target on ADBE to $450 from $560. Meanwhile, Credit Suisse analyst Phil Winslow decreased his price target to $425 from $525, also citing the firm's guidance.

Analyst Keith Weiss changed his rating on ADBE from Overweight to Equal-Weight and cut his price target to $362 from $591.

Is ADBE a Buy?

Regardless of its price slashes, the Street appears to retain a favorable outlook on the stock. A survey conducted by Seeking Alpha shows that 25 of 31 analysts over the past 90 days label the stock as either a Strong Buy or Buy.

The remaining six analysts have tagged ADBE as a Hold. Additionally, the average price target for Adobe is $467.31 with a top target of $549 and a low target of $362.

See the breakdown below: 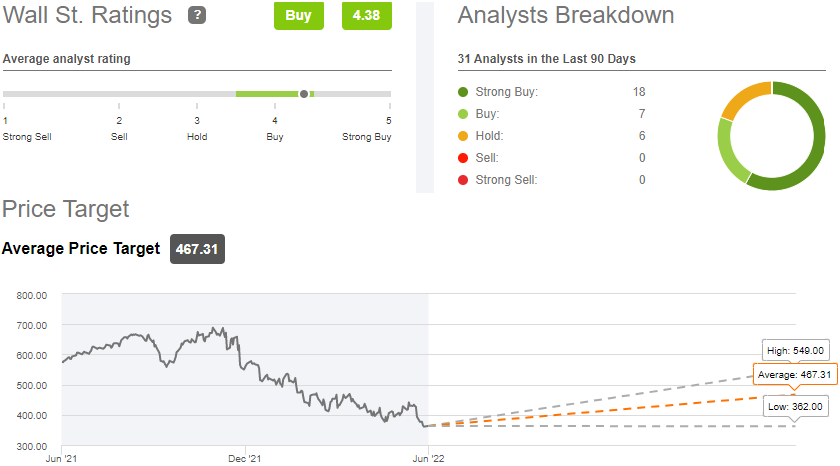 Seeking Alpha’s Quant Ratings tend to side with the more cautious analysts. The tool, which tracks quantitative measures related to the stock, labeled ADBE’s valuation as a D, its growth as a D+ and its momentum as a C. However, the Quant Ratings did deliver ADBE with an A+ when it came to profitability.

At the same time, fellow SA contributor Daniel Schonberger thinks that a 50% decline isn’t enough with the high risk of a severe recession and bear market on the horizon.