Bankruptcy filings across all types rose 10% from a year ago to 35,355, according to new research from Epiq's Bankruptcy Analytics platform.

On a month-over-month basis, the total number of bankruptcy filings rose even more, up 15% from July, representing a 16% increase in commercial filings and a 15% rise in individual filings.

For the first time, all chapters rose from July. Chapter 11, which allow corporations to restructure debt, filings surged 81% to 466 from 257 in July. Chapter 13 filings, which allow individuals to develop a plan to repay all or part of their debt, rose 15% to 14,981 filings. Chapter 7 filings, which provide for liquidation of the debtor's nonexempt property to distribute the proceeds to creditors, grew 13% in August to 19,884 filings. 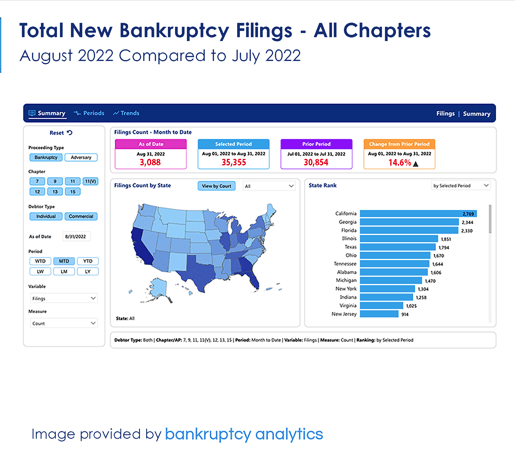 "New bankruptcy filings in August clearly show momentum in the market," said Chris Kruse, senior vice president at Epiq Bankruptcy. "Chapter 13 new filings continue the recent trend of month-over-month growth and for the first time since March, we also see increases in new Chapter 7 filings in August. We expect this trend to continue as the U.S. exits the summer and marches toward the fourth quarter."

Amy Quackenboss, executive director of American Bankruptcy Institute, said the increase comes as some households and businesses are experiencing expanding debt loads as interest rates rise and they deal with inflation. "Though still at historically low numbers, the increase in bankruptcy filings in August points to more families and businesses looking for a path to alleviate mounting financial challenges," she said.

One of the companies that filed for Chapter 11 bankruptcy in August was Endo International (OTCPK:ENDPQ), as the specialty pharmaceuticals company was burdened with more than $8B of debt as it deals with ongoing litigation related to its alleged role in the opioid crisis.