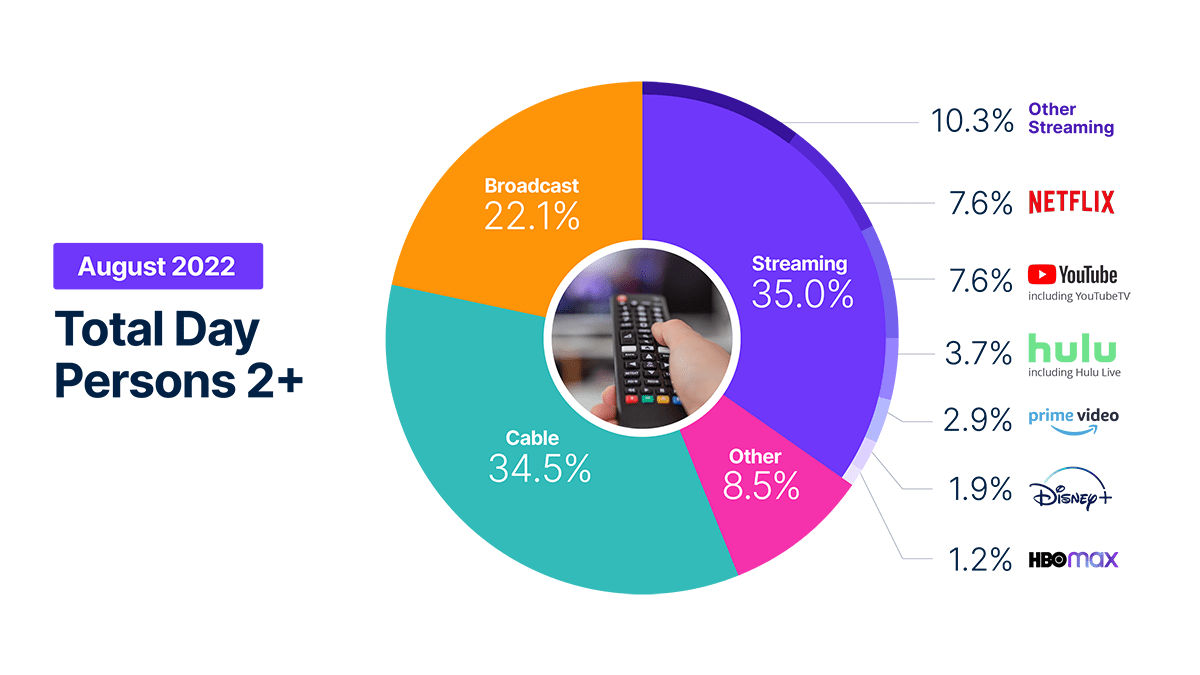 For the fifth straight month, streaming's share of the TV pie increased, rising to 35% following some high-profile new content releases, according to "The Gauge" from Nielsen, the ratings giant's monthly macro look at TV delivery platforms.

The previous month, streaming had surpassed cable to become the top single use of TV for the first time.

And while streaming increased its share, cable also ticked back up, to 34.5%. Broadcast increased its share as well, 22.1%. All of those share gains came out of the Other category, which fell to 8.5% share from the prior month's 9.2%. (The "Other" category is heavily videogaming use, which takes a hit as children return to schools around the country, but also includes viewing video discs.)

From a volume perspective, total TV usage was down in August, typical for the season, though broadcast volume rose, helped by general variety programs as well as a boost from sports. Cable volume declined, but that drop was mitigated by a heavy increase in sports viewing volume as well. Streaming volume was flat from the previous month, but up 22.6% year-over-year.

Digging into the streaming slice shows audiences moving to follow new and strong content. Longtime category leader Netflix (NASDAQ:NFLX) lost some share in August, to 7.6% from 8.0%, in a bit of withdrawal from the big July provided by Stranger Things. YouTube/YouTube TV (NASDAQ:GOOG) (GOOGL) boosted its share from 7.3% to tie Netflix for the first time, at 7.6%.

"Other streaming" (including smaller services like Crackle (CSSE) as well as linear streamers like Spectrum (CHTR), DirecTV and Sling TV (DISH)) ticked up to 10.3% from 10.2%.

Turning to weekly streaming ratings, a (relative) lull in the hot content spring and summer meant that no single program streamed a billion minutes for the first week since April.

That was part of a week where Netflix dominated as the overall content tide receded. The streaming pioneer had nine of the 10 most streamed shows.