Tech-driven real estate stocks are getting hit with the double whammy of climbing mortgage rates and risk aversion as investors worry about how tech growth names will fare as the U.S. economy weakens.

Names such as Redfin (NASDAQ:RDFN) and Zillow (NASDAQ:Z) have positioned their companies as proptech businesses disrupting the traditional real estate market. But over the past year, their shares have lagged the more established real estate names such as Re/Max (RMAX) and Anywhere Real Estate (NYSE:HOUS), formerly Realogy. To be sure, all of them have declined in the past year and all have underperformed the S&P 500's 14% decline as seen in the chart below. 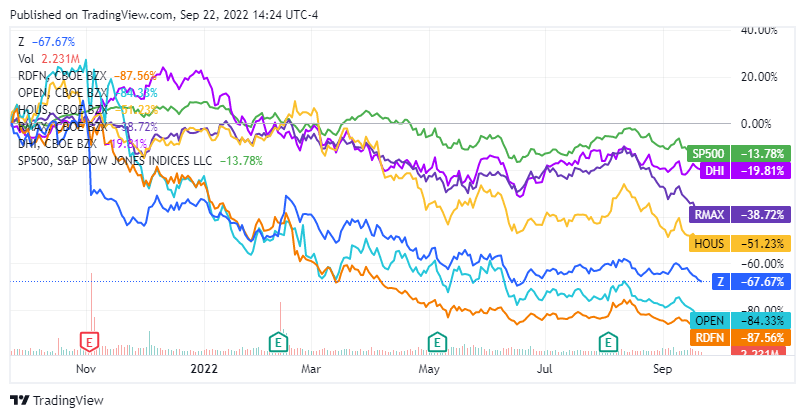 With the Federal Reserve raising its key interest rate by 75 basis points on Wednesday, for the third meeting in a row, mortgage rates are following. The average 30-year fixed rate mortgage rose to 6.29% in the week ended Sept. 22, up 27 basis points from the previous week, according to Freddie Mac, and the highest level since October 2008.

Homebuilder stocks are also in the red after the mortgage rates but not to the degree of the proptech names. In Thursday afternoon trading, Redfin (RDFN) shares have dropped 5.8%, home-flipper Opendoor Technologies (NASDAQ:OPEN) -6.6%, and Compass Inc. (NYSE:COMP) -7.0%. Zillow (Z) dropped 3.0%, but its shares had already declined steeply last November after it decided to exit its iBuying business.

SA contributor Gary Alexander is bearish on Redfin (RDFN) as he sees it ill prepared for a slowdown.