The S&P 500 (SP500)(NYSEARCA:SPY) has historically shot up 11.5% in the year following peak inflation, and a 50/50 mix of high and low P/E stocks offers good returns at attractive pricing in such an environment, a new BlackRock analysis shows.

“Inflation peaks and market rallies often go hand in hand,” Tony DeSpirito, BlackRock’s chief investment officer for U.S. fundamental equities, wrote in a recent note in which he argued that price increases might have topped out with June’s 9.1% Consumer Price Index.

DeSpirito analyzed figures going back to 1927 and found that the S&P 500 (SP500)(SPY) gained 11.5% on average (excluding dividends) during the year following such inflationary peaks:

The analyst also discovered that a 50/50 mix of growth and value stocks has historically beaten the broader market in such periods.

“We believe the complexities of the current backdrop argue for a selective approach, and one that favors the two ends of the spectrum ― growth and value ― vs. the stocks in between that hew more closely to market averages,” DeSpirito said.

The analyst found that a 50/50 mix of stocks in the top and bottom 20% of the Russell 1000 index in terms of forward price-to-earnings ratios would currently cost less than the broader-market average: 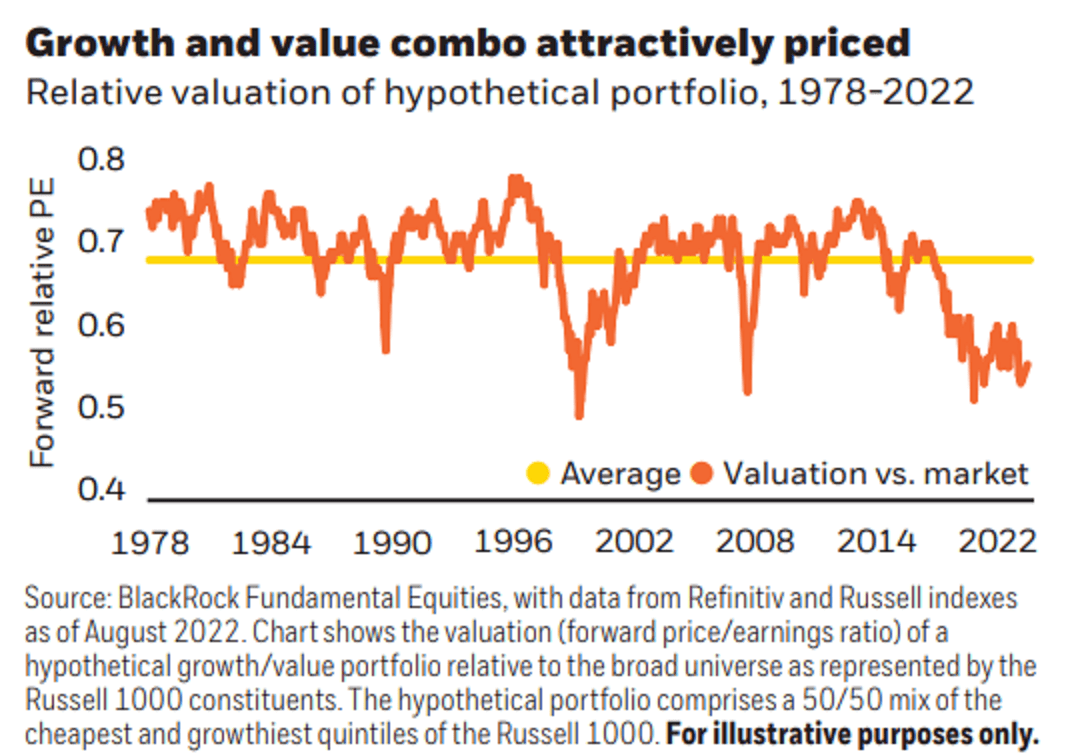 “Pricing [is] attractive,” DeSpirito wrote. “We found the hypothetical portfolio to trade at a meaningful discount to the broad market today.”

However, such a portfolio also managed to beat the overall market when back-tested over previous inflationary periods over the past 40-plus years.

DeSpirito said the 50/50 growth-and-value mix outperformed the broad market over the 12 months following peak inflation in four of six such events dating back since 1978.

“Performance [was] compelling,” the analyst said. “Businesses, whether priced as value or growth, will weather this chapter in history with varying degrees of success. This reinforces the need for selectivity and further argues for a focus on companies with quality characteristics ― particularly strong balance sheets and healthy free cash flow to offer a buffer in the case of a slowdown or profit squeeze.”