The market sentiment washout is nigh, according to the latest BofA Securities survey, but a bottom will likely require a shift in Fed feelings.

According to the survey of 371 money managers with $1.1T under management, average cash allocation has reached 6.3%, the highest since April 2001 and investors are now three standard deviations underweight stocks.

But a "big low" and "big rally" are still more likely in the second half of 2023 when Fed cuts become the consensus, Hartnett added. In the October survey, 28% predicted lower short rates, up from just 5% in March but still well shy of the 65% seen at other big lows, indicating the policy capitulation has a ways to go.

The most likely reason for a Fed pause or pivot remains inflation (a drop in the PCE deflator below 4%), but that was followed by a new entrant: a global credit event.

Piling into the greenback

"Inflation stays high as top 'tail risk' at 27% of FMS investors for 4th month in a row," Harnett noted. A deteriorating geopolitical situation came in at No. 2, followed by central banks staying hawkish and a deep global recession." 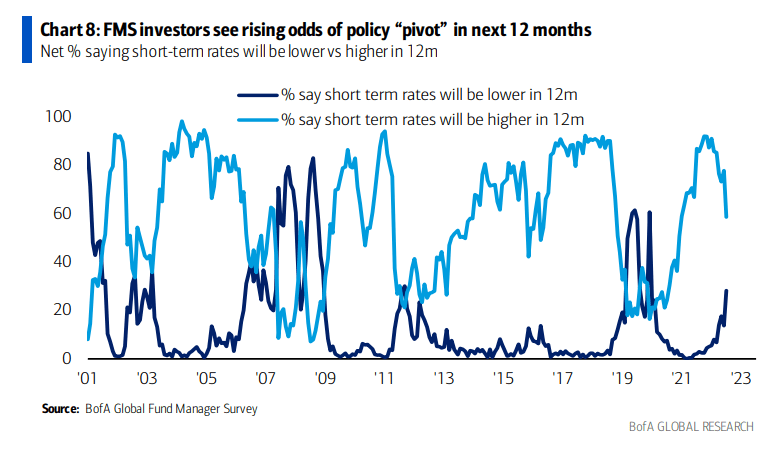