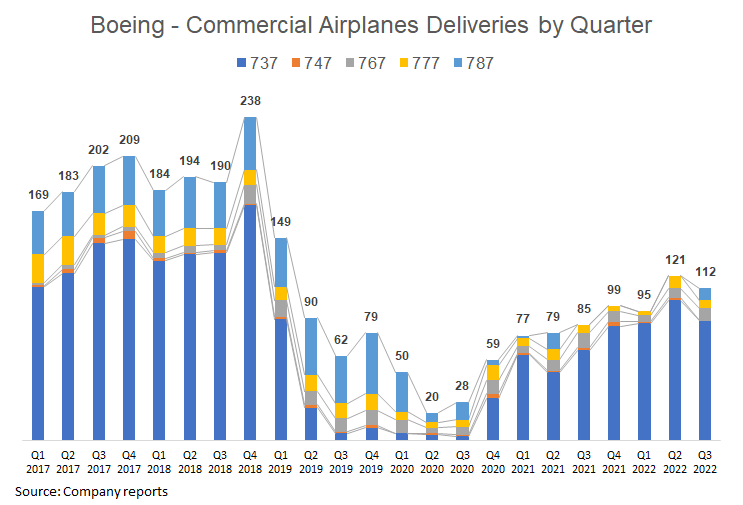 Boeing's (NYSE:BA) stock on Wednesday fell 8.8% -- the biggest one-day decline since May -- after the aircraft maker reported a bigger loss than expected.

The company said losses widened amid difficulties in its defense business, while its commercial aviation unit continues to face supply-chain constraints and regulatory hurdles.

Boeing reported a $3.3 billion loss – compared with a loss of $132 million a year earlier – including $2.8 billion in charges stemming from programs such as its military refueling tanker and replacements for Air Force One.

Revenue grew 4% from the prior year to $16 billion, missing the consensus estimate by $1.95 billion. Free cash flow of $2.9 billion put Boeing on course to end the year with positive cash flow.

"Turnarounds take time – and we have more work to do – but I am confident in our team and the actions we’re taking for the future," Dave Calhoun, president and CEO of Boeing, said in a memo to employees.

Speaking in a regularly scheduled conference call with investors, Calhoun again cut his 2022 target for deliveries of the 737 MAX single-aisle plane to 375 from the low 400s. The company delivered 29 of the jets a month in Q3 amid a goal of increasing production to more than 30, but was constrained by a shortage of engines.

Two versions of its 737 MAX jet face a year-end deadline to be certified by the U.S. Federal Aviation Administration for meeting safety standards. The requirements were developed in response to two fatal crashes of the earlier 737 MAX 8.

MAX jets that aren’t certified by the end of December would be required to undergo a potentially costly and prolonged overhaul of their cockpits, unless Boeing receives an extension from Congress.

Boeing may decide to discontinue the shorter MAX 7 and longer MAX 10 if the deadline isn't amended or the planes fail to be certified, the company said in a quarterly filing.