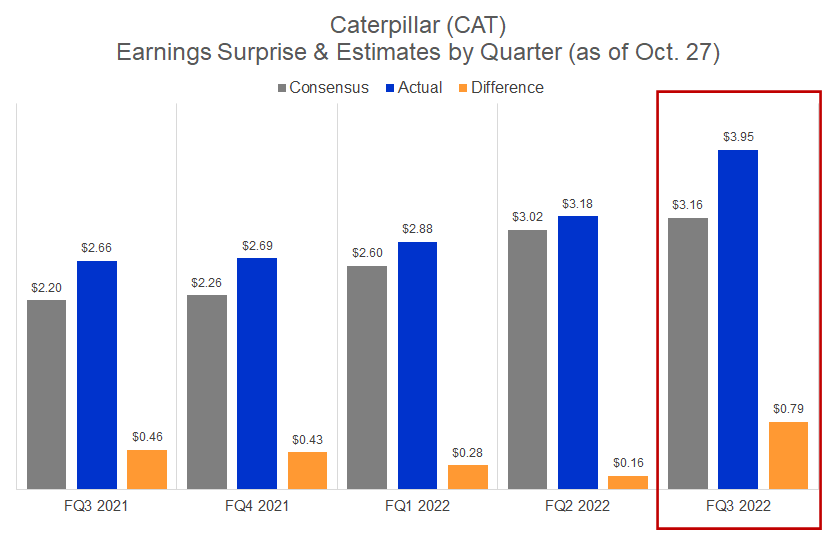 Caterpillar (NYSE:CAT) jumped as much as 9.1% on Thursday after reporting a record profit for Q3 on higher sales and better prices for its construction and heavy equipment.

Its adjusted earnings of $3.95 a share for Q3 beat Wall Street estimates by $0.79, while a 21% gain in revenue to $15 billion beat the consensus by $620 million. The revenue gains were partly offset by the strengthening of the U.S. dollar in relation to the euro, Japanese yen and Australian dollar.

"I'd like to thank our global Caterpillar team for delivering another quarter of double-digit top-line growth and record adjusted profit per share," Jim Umpleby, chairman and CEO of Caterpillar, said in a statement. "Our team remains focused on serving our customers as we continued to see healthy demand across most of our end markets during the third quarter."

The company bought back $1.4 billion of Caterpillar common stock and paid dividends of $0.6 billion in Q3.

Caterpillar during the quarter reached a settlement with the U.S. Internal Revenue Service to resolve a long-running dispute over tax years 2007 through 2016 without any penalties.

The final tax assessed by the IRS in the settlement was $490 million for the 10-year period, which the company primarily paid in the third quarter. The company expects to pay the related estimated interest of $250 million by the end of the year.