U.S. small businesses' rent delinquencies jumped in October as persistent inflation pressures ate away at their earnings. Specifically, 37% of SMBs couldn't pay their full rent last month, up from 30% in September, according to a recent survey from Alignable, an online referral network of 7M small business members.

That's the most rapid M/M increase in 2022, hovering around "quite high" levels when compared with other readings in the past 2.5 years, it added.

The survey, of which Alignable inquired 4,789 randomly selected SMBs between October 15-27, showed that most SMBs (51%) were negatively affected from higher rents. And even more respondents (59%) cited less consumer spending during the month as inflation reduced their purchasing power.

Another major obstacle that prevented businesses from paying their rent in full included pandemic-related supply chain disruptions, spelling trouble for auto-related companies, in particular, as car parts were in short supply, for instance. That being said, 49% of auto SMBs were unable to pay their rent in October, as per the survey.

Against the backdrop of stubbornly high consumer price inflation, the restaurant industry has been stung by decreased demand. "Some restaurateurs have shared that they are seeing fewer people eating out, largely because their customers don't have the extra disposable income to cover frequent dining at restaurants," Alignable explained.

In another measure of how SMBs continue to struggle from an array of deteriorating macroeconomic conditions, the National Federation of Independent Business (NFIB) Small Business Optimism Index inched up 0.3 points in September to 92.1, making it the ninth straight month below the 48-year average of 98, as seen in the chart below. The sentiment survey signaled that inflation remained a big concern as 30% of owners indicated inflation was their biggest problem when operating their business.

Of note, small businesses are an important gauge for the overall health of the domestic economy since they employ 46.4% of all private workers, according to the U.S. Small Business Administration Office of Advocacy.

On the consumer front, credit card delinquency rates continued to increase in September, though still below prepandemic levels. 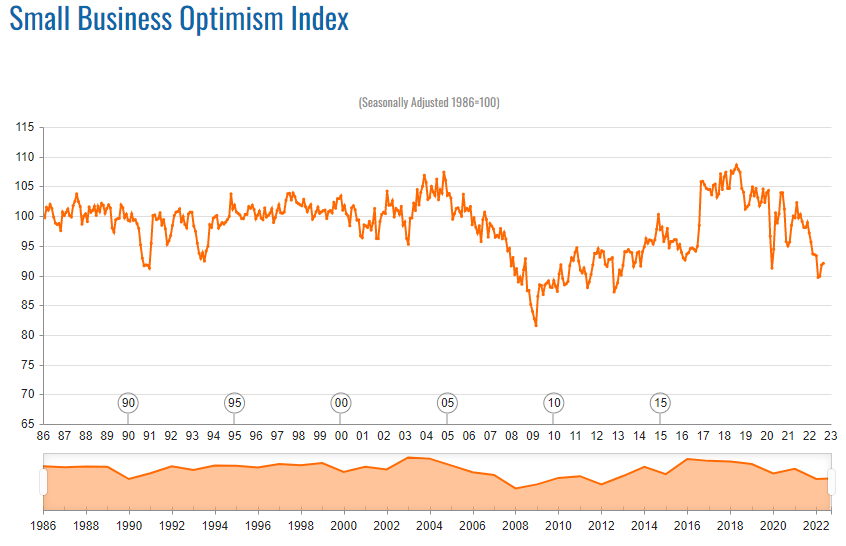