Bitcoin (BTC-USD) is on track to post a weekly loss of over 20%, with cryptocurrency investors still reeling from the implosion of troubled exchange FTX that sent shockwaves across the industry this week.

The top crypto, which was stuck in rangebound trading over the past several weeks, dropped to a two-year low of ~$15.7K on Wednesday.

FTX Token's (FTT-USD) market cap has shed ~$2.6B this week, currently standing at ~$350M, according to CoinMarketCap.

The world's largest crypto exchange Binance initially offered to acquire the non-U.S. business of FTX, but pulled out after FTX reportedly came under regulatory scrutiny over potential mishandling of funds. In response to the crypto selloff, Binance topped up its emergency insurance fund to $1B.

Voyager Digital (OTCPK:VYGVQ) said late on Friday that it reopened the bidding process for the firm after FTX filed for voluntary Chapter 11 bankruptcy.

SEC chairman Gary Gensler told CNBC that crypto investors need better protection as the sector is "significantly non-compliant", despite having some clear regulations.

Meanwhile, Galaxy Digital (OTCPK:BRPHF) CEO Mike Novogratz told CNBC that the FTX implosion is a "body blow" to trust in the industry. But MicroStrategy (MSTR) co-founder Michael Saylor said it highlights the importance of bitcoin (BTC-USD), adding that now is a good time to accumulate the token.

Now, one exchange traded fund has taken advantage of the broader selloff - ProShares Short Bitcoin Strategy ETF (BITI). The ETF climbed over 9% on Friday, with its trading volume at ~1.7M vs. average trading volume 916.9K.

On Thursday, inflation print for October came in cooler than expected, after which bitcoin (BTC-USD) and ether (ETH-USD) erased some losses as the data sparked speculation that the Federal Reserve could raise rates at a slower pace. 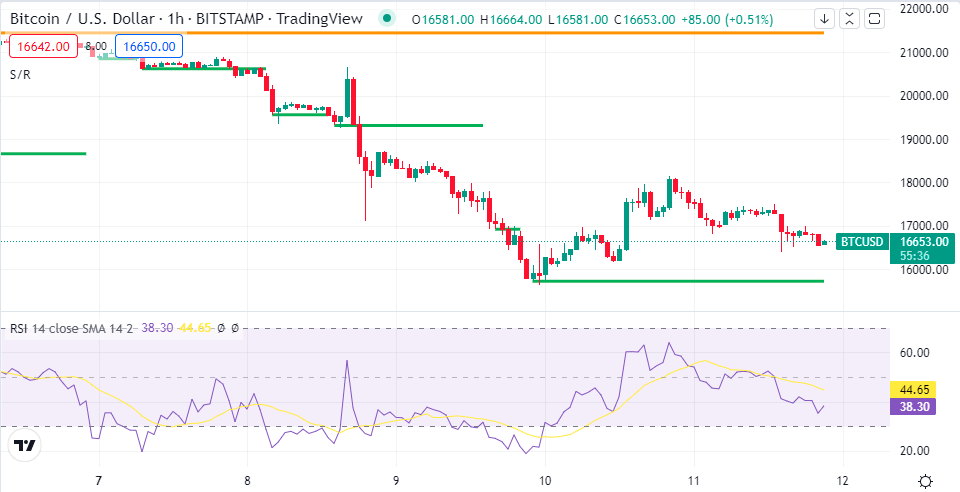 SA contributor Nathan Aisenstadt believes bitcoin (BTC-USD) will decline to $12.7K-$13.6K, after which there will likely be a multi-month period of accumulation. The FTX implosion, he said, raised the likelihood of a domino effect on other market participants.

The global cryptocurrency market cap stands at $848.56B, down 3.6% over Thursday, data from CoinMarketCap showed.

Bucking the trend were crypto exchanges Robinhood Markets (HOOD) +12.9%, Coinbase (COIN) +12.8% and Bakkt (BKKT) +10.6%, all recovering from losses seen this week after the FTX fallout.