Cash production cost is an important metric for cannabis industry.

Aphria is the lowest cost producer while Aurora has the highest cash cost among top producers.

All amounts in C$ except otherwise noted; market data as of Friday, Jan 5.

We are excited to launch our Complete Guide to The Cannabis Industry series that aims to equip investors with the knowledge they will need to analyze cannabis companies and make informed investment decisions in this sector as Canada is heading for full legalization by July 2018. In this article, we will discuss production cost, a metric cited by many but few understand fully given the non-IFRS nature and different definitions employed by producers. We will examine the top 4 producers but also wanted to point out that most other producers still don't publish cash cost per gram (such as Kronos Group (MJN.TO) and CanniMed (CMED.TO)).

For the cannabis industry, production costs are important, given it is the single largest cost of producing cannabis. Management uses this measure to track production cost trends and assess the sensitivity and tolerance for pricing changes. For investors, it is important to understand which producers have cost advantage in order to help assess competitiveness and profitability. While the Canadian cannabis industry is still relatively new and investors are avidly awaiting full legalization in July 2018, we will try to break down the various cost metrics being reported by the top 4 Canadian producers based on market capitalization. While we can't analyze every cannabis company out there, we hope this article provides a useful and practical framework for investors to analyze any producers you find interesting going forward.

Follow us for more Cannabis industry analysis and investment ideas! Also, for a detailed overview of the Canadian marijuana industry and analysis on the market leader, Canopy Growth (TWMJF), take a look at our recent article "Canopy Growth: Best Way To Play the Cannabis Industry".

Canopy is the largest publicly traded cannabis company with a market capitalization of C$6.5 billion. Canopy calculates its weighted average cost per gram before harvest, post-harvest and after shipping and fulfilling:

During Q2 2018 that ended on September 30, 2017, Canopy reported cost per gram to harvest of $0.72, compared to $0.99 same period last year. As Canopy continues to bring additional capacity online and optimize operations, we would expect cost to continue trending lower over time.

Aurora is the second largest publicly traded cannabis company with a market capitalization of C$6 billion. Aurora reports cash cost of sales per gram of dried cannabis and also cash cost to produce each gram, which is what we will focus on in this article for comparative purposes. The calculation is as following: 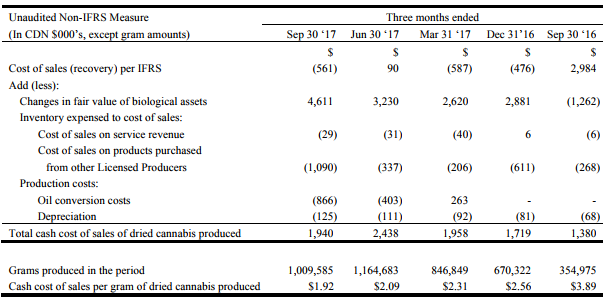 Aurora is the third largest publicly traded cannabis company with a market capitalization of C$3 billion. Aphria provides two metrics of cost per gram, "all-in" cost and cash costs per gram. The difference between the two metrics are amortization and packaging costs. 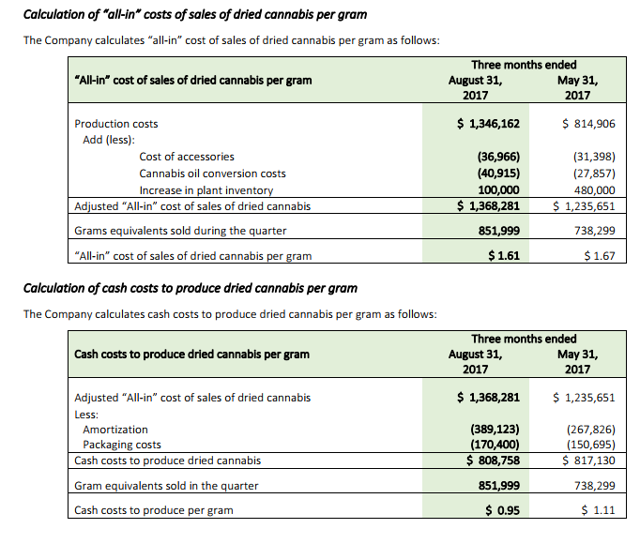 MedReleaf is the fourth largest cannabis company in Canada with a market capitalization of C$2.6 billion. MedReleaf calculates its cash cost per gram sold by removing post production costs from reported production costs:

Given the non-IFRS nature of cash cost to produce each gram, let's begin with a few observations on consistency and inconsistency across the 4 top producers we have examined:

Treatment for the following items differs among the 4 producers:

Below, we have summarized the key components of each company's reported cash cost to produce. In the case of Canopy, we are referring to its Cost per Gram Before Shipping and Fulfillment.

Putting It All Together

After we understand how each of the top 4 Cannabis produces report cash cost to produce dry cannabis, let's stack them up for a comparison. Before we reach any conclusion, let's review the limitations due to differences in how the reported cash cost is calculated.

We can make the following observations

We can use cash cost to look into a company's production capabilities and also management style and accounting choices. We found out Aphria has the lowest cost due to its greenhouse adoption; Canopy has a competitive cash cost but spends a lot more money on marketing, licensing, and fulfillment than its peers; Aurora has the highest cash cost even after adopting aggressive accounting by using total grams produced instead of sold.

As producers improve disclosure and reporting ahead of legalization, cash cost of production will become a common metrics increasingly adopted by the industry. However, the cash cost calculation is expected to remain different among producers. We hope this article shed some lights on the major components of cash cost and examples of differences among producers' calculations. As the industry continues to evolve and production profile stabilizes, production cost will become ever more important.

Next up, we will discuss production capacity, another important metric for the cannabis industry. Please leave a comment below for any feedback on this article as we look to continue providing valuable information to investors. Let us know if find this write-up helpful and what other information would you like to see in the future.

Disclosure: I/we have no positions in any stocks mentioned, but may initiate a long position in TWMJF over the next 72 hours. I wrote this article myself, and it expresses my own opinions. I am not receiving compensation for it (other than from Seeking Alpha). I have no business relationship with any company whose stock is mentioned in this article.