Atomera (NASDAQ:ATOM) is the producer of a coating technology called MST or Mears Silicon Technology. The coating enhances the performance of transistors. From the earnings deck:

Mears is actually the name of the founder of the company and now its CTO. The company has a couple of hundred patents and pending patents. The license income doesn't amount to a whole lot yet:

It's a little better than the graph suggests (see below). We're inclined to say that the business model is pretty interesting, with three possible sets of revenue streams: 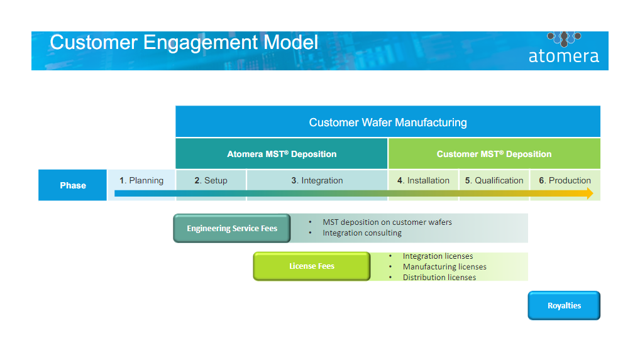 There are three different types of license grants:

Apart from these revenue streams there is also engineering services where Atomera provides technical assistance to clients. Here are these revenues: 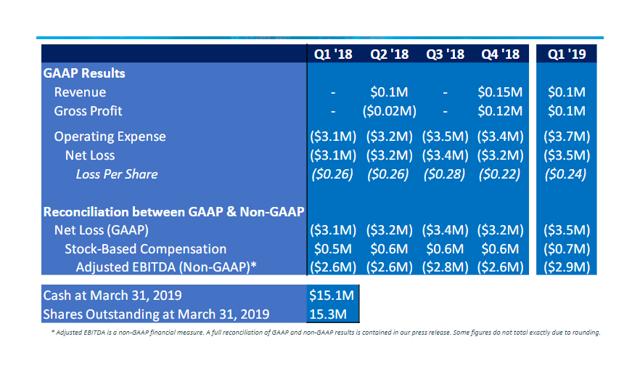 That's still not much and it's from two customers, integration license revenue from AKM and STMicro. ASC 606 forces the company to recognize revenue only upon delivery of the product back to these clients (after depositing MST on their wavers), so this is a slow grind.

There were also some setbacks as two customers left. One simply used MTS for one segment and they decided to discontinue that segment altogether, but are still in talks with Atomera about MTS use in another segment. The other customer simply didn't have the budget even before any test results became available.

There is however a growing customer engagement:

Here is what these phases mean:

That graph looks a lot more promising than the one depicting revenues. What's more, it looks like there they have hit on a game changer that could speed this process up considerably.

What management claims is that they have produced a breakthrough: 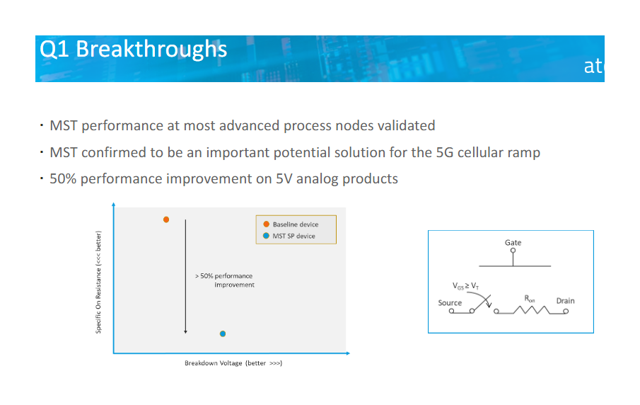 On third of their customers are still working in the analog space with very mature technologies where a couple of points of improvements is already considered quite significant.

The company can achieve 15%-20% of improvements with MST (although not in the first run), but combining MST with a smart profile doping technique they have managed to achieve much bigger improvements (Q1CC):

For the more technical listeners, this was for 5-volt NMOS analog component typically used for switches and power management. Test results showed up to a 50% improvement in specific on-resistance for short channel devices as well as a further improvement in breakdown voltage of the device. When we attempted to try the smart profile doping technique without MST, it did not show an improvement, validating that it was MST that brought the benefit. I should emphasize that this is not a new film. It's just a different integration technique, which unleashes much more of the potential of MST, meaning it should be relatively easy to adopt and should not cause a reset of testing efforts among existing customers.

This is all very new data (2 weeks old, at the time of the CC), so some caution is warranted, but if these results hold, this is a notable breakthrough and the third of companies that they are currently engaging with for whom this applies could very well speed up their decision. And the applicability is much wider, according to the PR (our emphasis):

Atomera, working with its partner foundry, has demonstrated a breakthrough performance improvement of up to a 50% reduction in channel on-resistance on 5V analog transistors. The semiconductor industry has been struggling for many years to find ways to improve this key metric and now Atomera’s new SP technique has the effect of unleashing MST to deliver this performance improvement. This new SP technique was achieved through a combination of quantum confinement and dopant profile engineering only made possible by MST. The MST SP breakthrough has applications beyond 5V analog to many other silicon devices, including planar CMOS devices... Based on only about a week of discussions with customers, I also anticipate a rapid expansion of our pipeline over the coming quarters.

They reported a couple of other notable improvements as well (Q1CC):

One of the big breakthroughs has been in the industry's more advanced production nodes. Atomera, in partnership with UC Berkeley School of Engineering and Notre Dame's Engineering Department, has published papers in the past detailing the advantages that MST could bring to both high-k metal-gate and FinFET products. hese papers are based on simulation models and only limited experimental results since the advanced process nodes are not widely accessible and are extremely expensive, but they all show impressive performance improvements with MST. Over the last few months, we've had multiple test results from actual silicon runs, which have validated those fundamental mechanisms.

They can't share more details as the info is largely customer data. Management also argued that their MST technology is likely to become an important enabling technology for 5G as MST benefits SOI (silicon-on-insulator) technology, to which MST provided roughly a 30% improvements and management argues that it is already working with multiple customers in this space.

At the moment there is a fairly unprecedented industry slowdown going on with global semiconductor sales plunging 24% from its peak, which is something we haven't seen since the great recession. From Wolf Street:

If you think this is a disadvantage, think again. In fact, the reverse is true as many more potential clients have time and capacity to experiment with new technologies like the company's solutions. 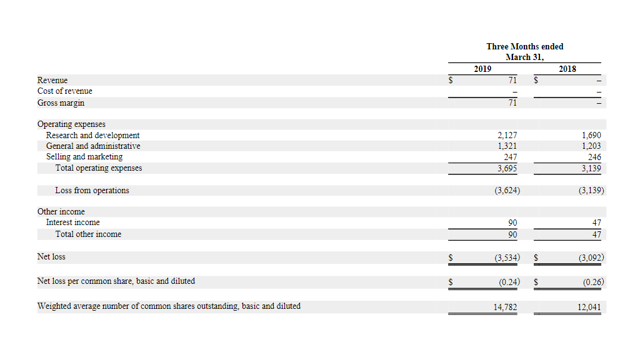 This increase was mainly due to higher spending on outsourced fabrication and test supporting both customer evaluations and internal R&D work and higher payroll and stock-based compensation expense due to increased headcount.

This is largely a pre-revenue company still so cash burn is one of the first things investors should look at. Cash burn has gradually increased to $10M per year.

Share based compensation is steep but that's a positive at this point given the lack of income. The share count is higher than the graph suggests, 14.9M in Q1 and add to these another 4.2M from stock options and warrants. So the cash is good for 4-5 quarters. The company has no debt. 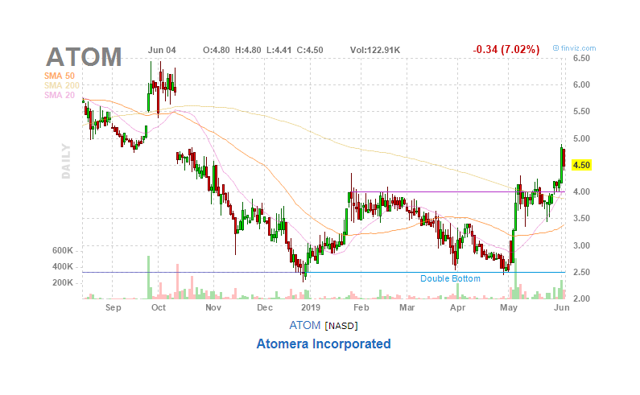 It's very early days for this company, but given the announced multiple breakthroughs things could easily accelerate from here, but it should be clear this is a rather speculative proposition.

While we have little visibility in the speed or magnitude of a possible ramp, since the company operates mostly on a license basis, a ramp in revenue doesn't need to be all that dramatic to put the company in the black and stop the cash bleed.

There is little to no independent verification of the claims they make about the breakthroughs, but the company does have two customers which have licensed their tech (in the form of integration licenses), one of which is STMicro which should put most worries about possible vaporware aside but there is no public vetting of their breakthroughs yet.

For those with less disposition to gamble on what seems a promising situation they could wait until more customers join and start licensing. That isn't likely to go by unnoticed in the share price though.